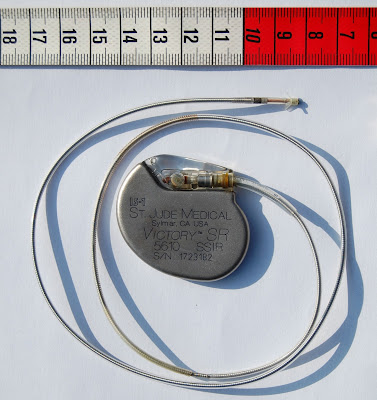 The joint meeting of the European Heart Rhythm Association (EHRA) of the European Society of Cardiology (ESC) and Cardiostim is being held in Milan, Italy. The scientific programme is here: http://www.flipsnack.com/Escardio/ehra-europace-cardiostim-2015-advance-programme.html.

Lennerz said: 'Pacemakers can mistakenly detect electromagnetic interference (EMI) from smartphones as a cardiac signal, causing them to briefly stop working. This leads to a pause in the cardiac rhythm of the pacing dependent patient and may result in syncope. For implantable cardioverter defibrillators (ICDs) the external signal mimics a life threatening ventricular tachyarrhythmia, leading the ICD to deliver a painful shock.'

Device manufacturers and regulatory institutions including the US Food and Drug Administration (FDA) recommend a safety distance of 15 to 20 cm between pacemakers or ICDs and mobile phones. The advice is based on studies performed primarily in pacemakers 10 years ago. Since then smartphones have been introduced and mobile network standards have changed from GSM to UMTS and LTE. New cardiac devices are now in use including ICDs, cardiac resynchronisation therapy (CRT) and MRI compatible devices.

The current study evaluated whether the recommended safety distance was still relevant with the new smartphones, networks and cardiac devices. A total of 308 patients (147 pacemakers and 161 ICDs, including 65 CRTs) were exposed to the electromagnetic field of three common smartphones (Samsung Galaxy 3, Nokia Lumia, HTC One XL) which were placed on the skin directly above the cardiac device.

The smartphones were connected to a radio communication tester, which works like a mobile network station. The investigators put the smartphones through a standardised protocol of the calling process which included connecting, ringing, talking and disconnecting. The actions were performed in GSM, LTE and UMTS at the maximum transmission power and at 50 Hz, a frequency known to influence cardiac implantable electronic devices. Electrocardiograms (ECGs) were recorded continuously and checked for interference.

Lennerz said: 'From earlier studies we know that the most vulnerable phases of a call are ringing and connecting to the network, not talking, so it was important to analyse these separately.' More than 3,400 tests on EMI were performed. One out of 308 patients (0.3 percent) was affected by EMI caused by smartphones. This patient's MRI compatible ICD misdetected electromagnetic waves from the Nokia and HTC smartphones operating on GSM or UMTS as intracardiac signals.

Lennerz said: 'Interference between smartphones and cardiac devices is uncommon but can occur so the current recommendations on keeping a safe distance should be upheld. Interestingly, the device influenced by EMI in our study was MRI compatible which shows that these devices are also susceptible.'

In a second study on EMI, researchers advise limiting exposure to high voltage power lines.2 The study was conducted in response to public concerns about bicycle routes and walking paths under high voltage power lines (230 kV and more) and whether these are safe for patients with cardiac devices. These high electric fields are also encountered in utility substations where employees who bring up power lines, conduct maintenance or work within the buildings (cleaners, for example) may be exposed.

Dr. Katia Dyrda, a cardiologist at Montreal Heart Institute, University of Montreal, said: 'High electric fields may interfere with the normal functioning of cardiac devices, leading to the withholding of appropriate therapy (anti-bradycardia pacing, for example) or to the delivery of inappropriate shocks. The International Organization for Standardization says pacemakers and ICDs should give resistance up to 5.4 kV/m (for 60 Hz electric fields) but electric fields can reach 8.5 kV/m under high voltage power lines and 15 kV/m in utility substations.'

She added: 'There is a lot of interest in using the areas under power lines as bicycle paths or hiking trails because it's essentially free space. But patients and the medical community want to understand the risks. There are no recommendations from device manufacturers about power lines or higher electric fields.' The study exposed 40 cardiac devices (21 pacemakers and 19 ICDs) from five manufacturers to electric fields up to 20 kV/m in a high voltage laboratory. The devices were mounted in a saline tank at human torso height. Devices were set up as both left and right sided pectoral implants.

Dyrda said: 'There is no significant concern for patients with pacemakers programmed in the usual configuration (nominal settings, in bipolar mode). For the minority of patients with devices in unipolar mode or with very sensitive settings, counselling should be given at implantation or at medical follow-up.'

She added: 'There is no need for patients with a pacemaker or ICD to avoid crossing under high voltage power lines (> 230 kV) but patients should avoid staying in a stationary position underneath them. Passing near pylons rather than between two pylons mitigates exposure to the electric field because the wires sag in the middle and the field is higher at this location.'

Dyrda emphasised that this advice does not concern distribution lines (lines delivering electricity to homes), as the 60 Hz electric field that they generate is very low. She added: 'Patients ask us if they should avoid driving on roads that cross under high voltage power lines. The answer is no. If you're in a vehicle you are always protected because your car acts as a Faraday cage and shields you automatically.' Employees with a pacemaker or defibrillator should tell their employer so that their safety at work can be carefully evaluated, urged Dyrda. She said: 'Our study tested the effect of electric fields up to 20 kV/m and the results can be used to assess individual risks depending on exposure levels during specific tasks and the type and model of cardiac device. This may lead to job adjustments or, more rarely, to a job change.'