Small Thunderstorms May Add Up To Massive Cyclones on Saturn

For the last decade, astronomers have observed curious “hotspots” on Saturn’s poles. In 2008, NASA’s Cassini spacecraft beamed back close-up images of these hotspots, revealing them to be immense cyclones, each as wide as the Earth. Scientists estimate that Saturn’s cyclones may whip up 300 mph winds, and likely have been churning for years. 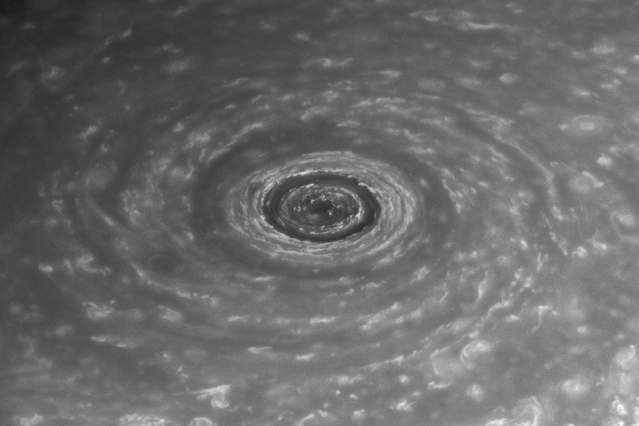 While cyclones on Earth are fueled by the heat and moisture of the oceans, no such bodies of water exist on Saturn. What, then, could be causing such powerful, long-lasting storms?

In a paper published today in the journal Nature Geoscience, atmospheric scientists at MIT propose a possible mechanism for Saturn’s polar cyclones: Over time, small, short-lived thunderstorms across the planet may build up angular momentum, or spin, within the atmosphere — ultimately stirring up a massive and long-lasting vortex at the poles.

The researchers developed a simple model of Saturn’s atmosphere, and simulated the effect of multiple small thunderstorms forming across the planet over time. Eventually, they observed that each thunderstorm essentially pulls air towards the poles — and together, these many small, isolated thunderstorms can accumulate enough atmospheric energy at the poles to generate a much larger and long-lived cyclone.

This colorful view from NASA's Cassini mission is the highest-resolution view of the unique six-sided jet stream at Saturn's north pole known as "the hexagon."

The team found that whether a cyclone develops depends on two parameters: the size of the planet relative to the size of an average thunderstorm on it, and how much storm-induced energy is in its atmosphere. Given these two parameters, the researchers predicted that Neptune, which bears similar polar hotspots, should generate transient polar cyclones that come and go, while Jupiter should have none.

Morgan O’Neill, the paper’s lead author and a former PhD student in MIT’s Department of Earth, Atmospheric and Planetary Sciences (EAPS), says the team’s model may eventually be used to gauge atmospheric conditions on planets outside the solar system. For instance, if scientists detect a cyclone-like hotspot on a far-off exoplanet, they may be able to estimate storm activity and general atmospheric conditions across the entire planet.

“Before it was observed, we never considered the possibility of a cyclone on a pole,” says O’Neill, who is now a postdoc at the Weizmann Institute of Science in Israel.

“Only recently did Cassini give us this huge wealth of observations that made it possible, and only recently have we had to think about why [polar cyclones] occur.”

O’Neill’s co-authors are Kerry Emanuel, the Cecil and Ida Green Professor of Earth, Atmospheric and Planetary Sciences, and Glenn Flierl, a professor of oceanography in EAPS.

Polar cyclones on Saturn are a puzzling phenomenon, since the planet, known as a gas giant, lacks an essential ingredient for brewing up such storms: water on its surface.

“There’s no surface at all — it just gets denser as you get deeper,” O’Neill says. “If you lack choppy waters or a frictional surface that allows wind to converge, which is how hurricanes form on Earth, how can you possibly get something that looks similar on a gas giant?”

The answer, she found, may be something called “beta drift” — a phenomenon by which a planet’s spin causes small thunderstorms to drift toward the poles. Beta drift drives the motion of hurricanes on Earth, without requiring the presence of water. When a storm forms, it spins in one direction at the surface, and the opposite direction toward the upper atmosphere, creating a “dipole of vorticity.” (In fact, videos of hurricanes taken from space actually depict the storm’s spin as opposite to what’s observed on the ground.)

“The whole atmosphere is kind of being dragged by the planet as the planet rotates, so all this air has some ambient angular momentum,” O’Neill explains. “If you converge a bunch of that air at the base of a thunderstorm, you’re going to get a small cyclone.”

The combination of a planet’s rotation and a circulating storm generates secondary features called beta gyres that wrap around a storm and essentially split its dipole in half, tugging the top half toward the equator, and the bottom half toward the pole.

The team developed a model of Saturn’s atmosphere and ran hundreds of simulations for hundreds of days each, allowing small thunderstorms to pop up across the planet. The researchers observed that multiple thunderstorms experienced beta drift over time, and eventually accumulated enough atmospheric circulation to create a much larger cyclone at the poles.

“Each of these storms is beta-drifting a little bit before they sputter out and die,” O’Neill says. “This mechanism means that little thunderstorms — fast, abundant, but not very strong thunderstorms — over a long period of time can actually accumulate so much angular momentum right on the pole, that you get a permanent, wildly strong cyclone.”

O’Neill applied this relationship to Saturn, Jupiter, and Neptune. In the case of Saturn, the planet’s atmospheric conditions and storm activity are within the range that would generate a large polar cyclone. In contrast, Jupiter is unlikely to host any polar cyclones, as the ratio of any storm to its overall size would be extremely small. The dimensions of Neptune suggest that polar cyclones may exist there, albeit on a fleeting basis.

“Saturn has an intense cyclone at each pole,” says Andrew Ingersoll, professor of planetary science at Caltech, who was not involved in the study. “The model successfully accounts for that. Jupiter doesn't seem to have polar cyclones like Saturn's, but Jupiter isn't tipped over as much as Saturn, so we don't get a good view of the poles. Thus the apparent absence of polar cyclones on Jupiter is still a mystery.”

The researchers are eager to see whether their predictions, particularly for Jupiter, bear out. Next summer, NASA’s Juno spacecraft is scheduled to enter into an orbit around Jupiter, kicking off a one-year mission to map and explore Jupiter’s atmosphere.

“If what we know about Jupiter currently is correct, we predict that we won’t see these wildly strong cyclones,” O’Neill says. “We’ll find out next year if our predictions are true.”

This research was funded in part by the National Science Foundation.