Seeing a Supernova in a New Light

Type Ia supernovae are the "standard candles" astrophysicists use to chart distance in the Universe. But are these dazzling exploding stars truly all the same? To answer this, scientists must first understand what causes stars to explode and become supernovae.

Supernova 3C58, first observed in the year 1181 AD by Chinese and Japanese astronomers, was imaged by the Chandra telescope in X-ray emissions. 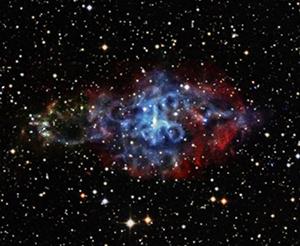 Recently, a unique collaborative project between the California Institute of Technology (Caltech) and the Weizmann Institute of Science provided a rare glimpse of the process. Their findings were published in Nature.

The project, called the Palomar Transient Factory, is a robotic telescope system based in Southern California that scans the night sky for changes. In May, halfway around the world at the Weizmann Institute, Dr. Ilan Sagiv realized that one of the bright new lights the Palomar telescope had pinpointed was, indeed, a supernova - just four days into the explosion - and he sounded the alert sending the Swift Space Telescope on NASA's Swift Satellite to observe the blast. But the Swift Telescope also observed in an unusual way - in the invisible, ultraviolet range.

"Ultraviolet is crucial," says the Weizmann Institute's Prof. Avishay Gal-Yam of the Particle Physics and Astrophysics Department, "because initially, supernova blasts are so energetic that the most important information can only be gathered in short wavelengths. And it can only be seen from a space telescope, because the ultraviolet wavelengths are filtered out in the Earth's atmosphere."

The researchers collected observations ranging from the energetic X-ray and UV all the way to the radio wavelengths, the latter effort led by the Institute's Dr. Assaf Horesh. Caltech graduate student Yi Cao, who was the lead author on the paper, and his advisor Prof. S. Kulkarni, compared the figures from the observations to various models to see which fit. Astrophysicists mostly agree that the exploding stars that become type Ia supernova are extremely dense, old stars called white dwarfs. But a number of models have been proposed to explain what makes them suddenly blow up.

Ultraviolet observation enabled the researchers to see something they had never seen before: a unique, brief spike in the high-energy radiation very early on. This spike, says Gal-Yam, fits a model in which a dwarf star has a giant companion. "The white dwarf is the mass of the Sun packed into a sphere the size of the Earth, while its companion is around 50-100 times bigger around than the Sun." Material flows from the diffuse star to the dense one until, at some point the pressure from the added mass causes the smaller star to detonate. The radiation spike is caused by the initial material thrown off in the blast slamming into the companion.

Gal-Yam says that the group's findings show, among other things, the importance of ultraviolet-range observations. He is hopeful that the ULTRASAT mini-satellite planned by the Weizmann Institute's Prof. Eli Waxman, together with other researchers, the Israeli Space Agency and NASA, which will observe in the ultraviolet range, will help researchers discover whether this explosive process is common to type Ia supernovae.