New work on the skeletal remains of scarlet macaws found in an ancient Pueblo settlement indicates that social and political hierarchies may have emerged in the American Southwest earlier than previously thought. Researchers determined that the macaws, whose brilliant red and blue feathers are highly prized in Pueblo culture, were persistently traded hundreds of miles north from Mesoamerica starting in the early 10th century, at least 150 years before the origin of hierarchy is usually attributed.

This skull of a scarlet macaw (Ara macao) was excavated from Pueblo Bonito in New Mexico by researchers from the American Museum of Natural History in 1897. 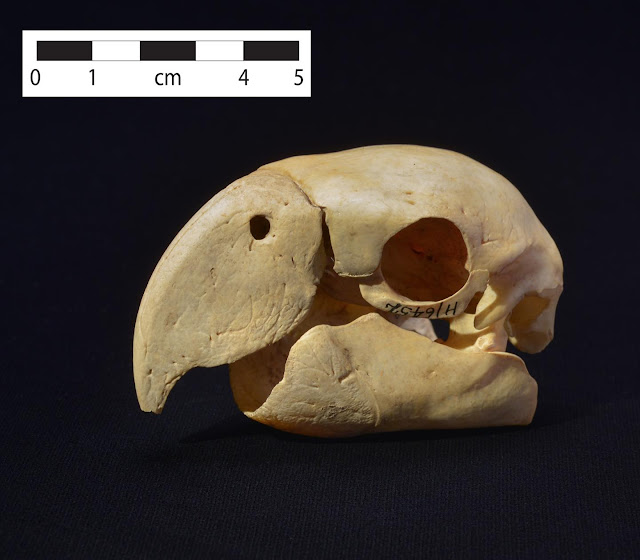 The findings, published today in the Proceedings of the National Academy of Sciences, suggest that the acquisition and control of macaws, along with other valued items like chocolate and turquoise, may have facilitated the development of hierarchy in the society.

"By directly dating the macaws, we have demonstrated the existence of long-distance networks throughout much of this settlement's history," said Adam Watson, a postdoctoral fellow in the American Museum of Natural History's Division of Anthropology and lead author on the paper.

"Our findings suggest that rather than the acquisition of macaws being a side effect of the rise of Chacoan society, there was a causal relationship. The ability to access these trade networks and the ritual power associated with macaws and their feathers may have been important to forming these hierarchies in the first place."

Pictured is a scarlet macaw. 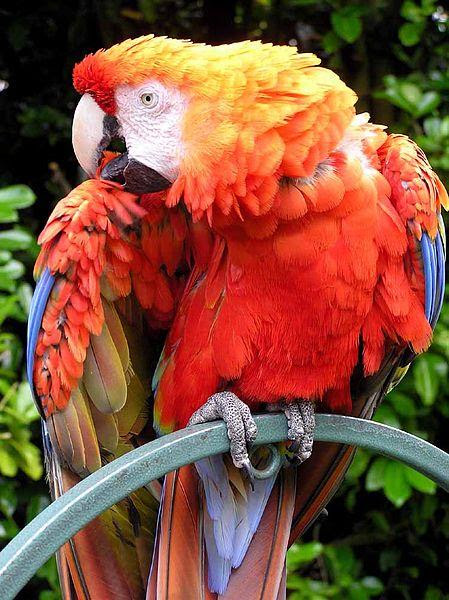 Archaeologists have known for more than a century that the pre-Hispanic Pueblo people of the American Southwest acquired goods from Mesoamerica, including marine shells from the Gulf of California, raw copper and crafted copper bells from west Mexico, cacao from the Neotropics, and tropical birds. Scarlet macaws (Ara macao) have been recovered from many settlements in the Southwest, particularly at Chaco Canyon in northwestern New Mexico, a major cultural center that was densely occupied between about AD 800 and 1200 and had more than a dozen multi-storied "great houses."

'There is still lots to learn from Chaco Canyon,' said Douglas J. Kennett, professor of environmental archaeology, Penn State. 'Past dating has been too reliant on tree-ring dates, so we are going back into the collections and targeting objects like the scarlet macaws that can be radiocarbon dated.'

Excavations at Chaco Canyon began in the late 1800s, and by the early 1900s, thousands of artifacts had been shipped back east, many to the American Museum of Natural History in New York City. The researchers sampled scarlet macaws from these archives. They report their results in today's (June 22) online issue of Proceedings of the National Academy of Sciences.

This photo shows a modern view of Pueblo Bonito, the largest of the 'great houses' in the pre-Hispanic cultural center of Chaco Canyon, which was occupied between about AD 900 and 1500. Pueblo Bonito had about 650 rooms. 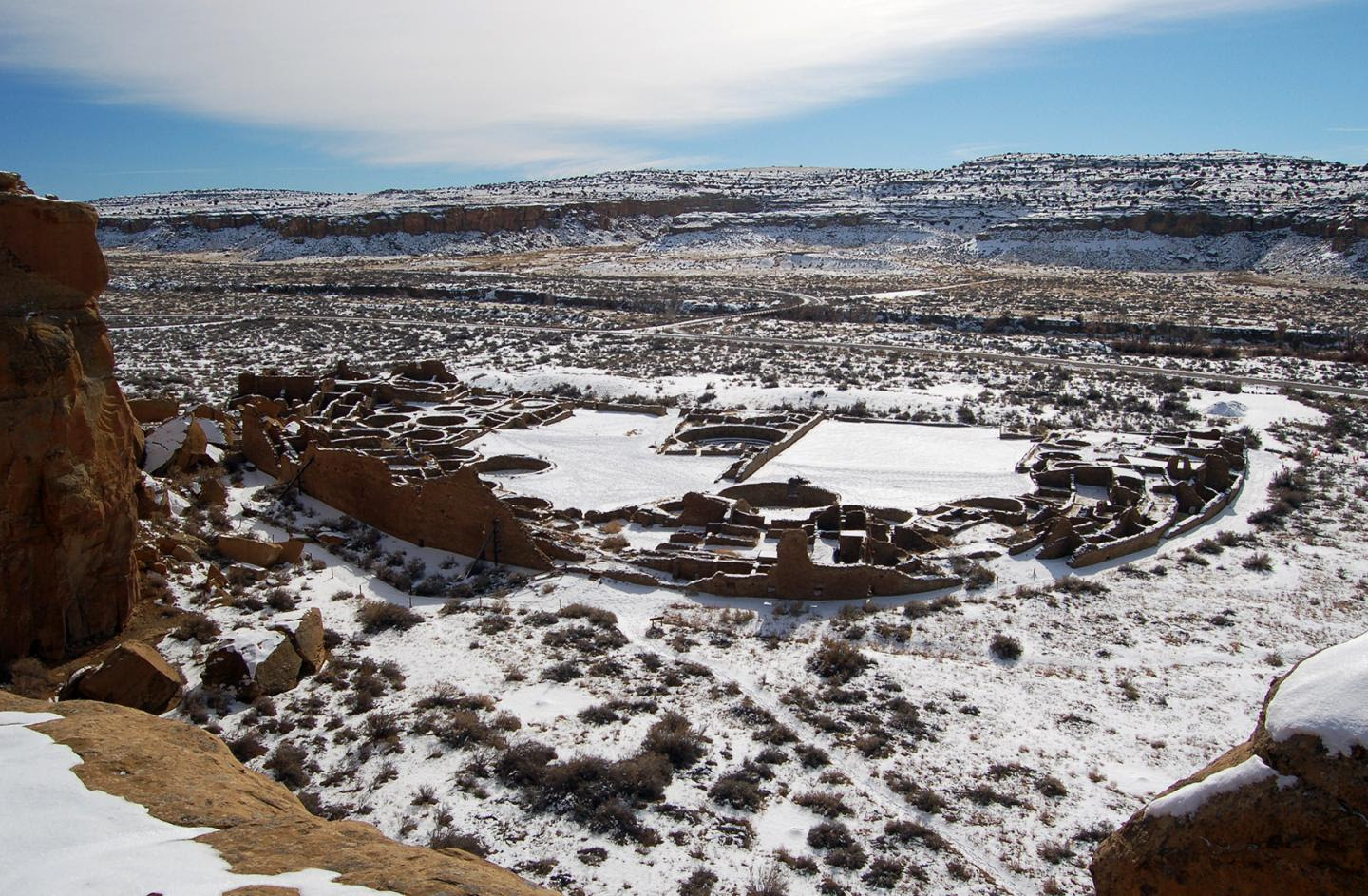 The birds are native to humid forests in tropical America--primarily the Gulf Coast region of Mexico, Central America, and northern sections of South America--so their presence at Chaco Canyon indicates the existence of long-distance procurement networks often characteristic of a complex society. It was traditionally thought that the Pueblo people did not bring these items back to the settlement until AD 1040, the start of an era of rapid architectural expansion called the Chaco florescence.

But new radiocarbon dating of artifacts discovered in the settlement is changing that view.

First excavated by a Museum-led team in 1896, the largest of the Chaco Canyon great houses was Pueblo Bonito, which had about 650 rooms. Among those rooms was one particularly unusual crypt: Room 33, a single small structure in the oldest area of the Pueblo, that contained 14 human bodies along with significant amounts of symbolically important items like turquoise, shell, and flutes. Two of the bodies were buried below a rare wooden floor with the majority of the grave goods, signaling the special treatment of elite individuals at Pueblo Bonito. 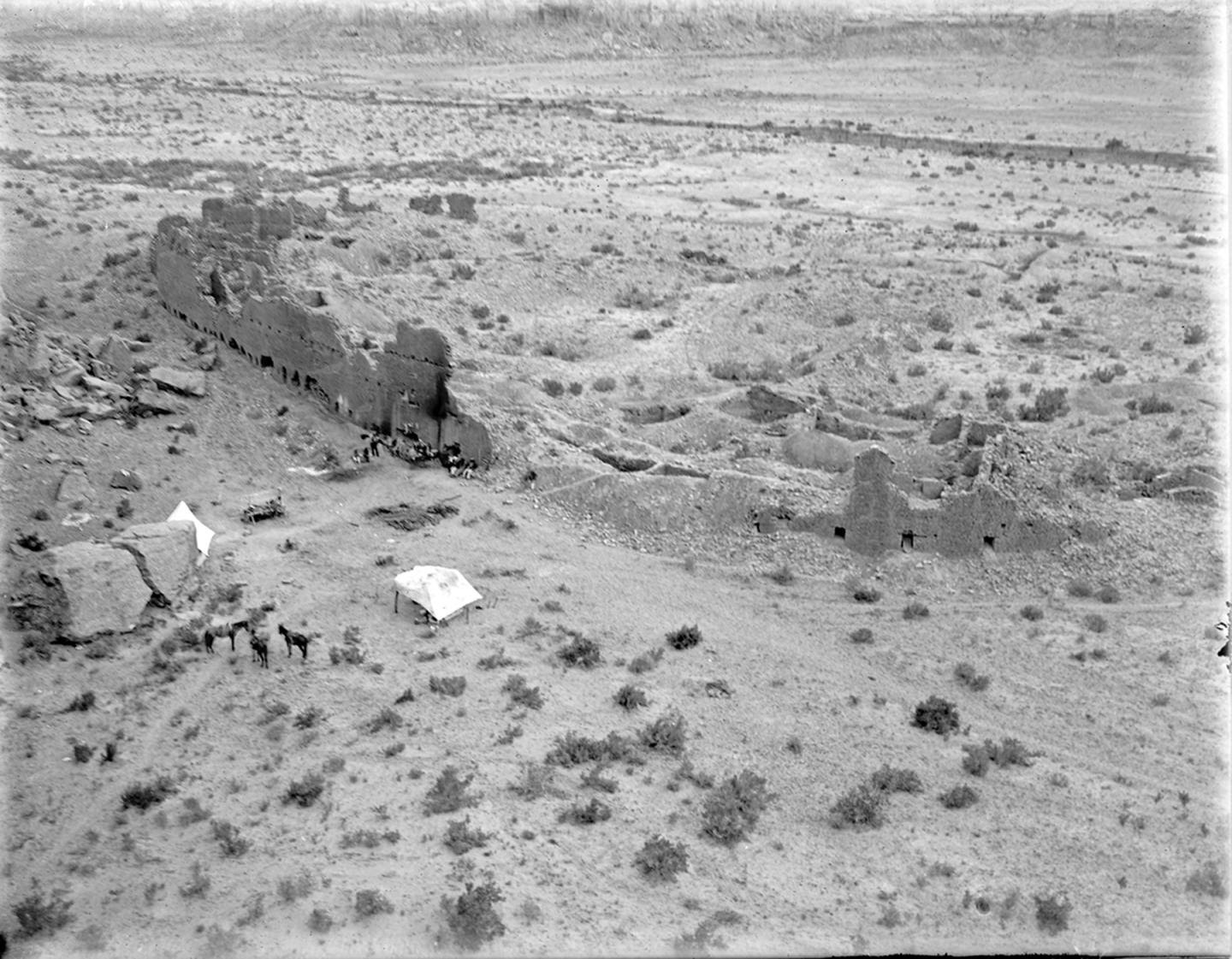 "In general, most researchers have argued that emergence of hierarchy, and of extensive trade networks that extended into Mexico, would coincide with what we see as other aspects of the Chaco florescence: roads being built outward from Chaco and the formation of what are called Chaco outliers that mimic the architecture seen in the cultural center," said Stephen Plog, professor of archaeology at the University of Virginia and a co-author on the paper. "For many years, that was the dominant model."

But in 2010, radiocarbon dating led by Plog showed that the two burials happened no later than AD 775-875.

"Based on these results, which call into question when the formation of the hierarchy actually began in Chaco, we decided to take another look at the macaws," Watson said.

Ethnographically, scarlet macaws are particularly significant in Pueblo cosmology, where based on directional association by color (red/orange), they tend to designate southern positions. Ritual use of macaw feathers on prayer sticks, costumes, and masks to communicate prayers to gods is well recorded. The acquisition and control of scarlet macaws was likely the province of social and religious elites.

"Birds are a part of nature, but they are also agents with magical properties that can be put to human use," said Peter Whiteley, a curator in the Museum's Division of Anthropology and a co-author on the paper. "Flight or just the appearance of certain birds or the use of their feathers is believed to motivate the fall of rain or snow, as well as the seasons, the sunshine, and the heat."

The remains of 30 macaws have been found in Pueblo Bonito, including 14 in a single structure: Room 38, which, based on the amount of guano detected on the floor, was likely a sort of aviary. Previous attempts at indirect dating of macaw skeletons concluded that they were obtained during the Chaco florescence, but the accuracy of the methods used, based on associated tree rings and ceramic type frequencies, is questionable. With radiocarbon dating, the researchers examined 14 Pueblo Bonito macaw skeletons that are currently housed in the Museum's collection.

Direct radiocarbon dating of macaw skeletons found that 12 of the 14 sampled macaws predate the Chaco florescence, with about half of them dating to the late 800s and mid-900s. The acquisition of these birds would have been a formidable task, requiring the removal of fledglings from the nest soon after their birth before traveling between 1,800 and 2,500 kilometers (about 1,120-1,550 miles) on foot back to Chaco.

"We propose that the hierarchical sociopolitical foundation of Chacoan society was established during the initial era of construction of the great houses and that this foundation was reinforced during the late ninth and 10th centuries by the acquisition of scarlet macaws and other cosmologically powerful agents from Mesoamerica," Plog said. "Sociopolitical hierarchies evolved over the course of nearly two centuries before taking the more visible forms seen in the Chaco florescence. As in many parts of the world, this was a long-term process rather than a brief, abrupt transformation."

Unlike turquoise or copper, scarlet macaws can be directly radiocarbon dated, and recent advances in AMS technology now allow the use of very small samples and provide date ranges that are far narrower than were possible in the past. There are 35 known scarlet macaw specimens from Chaco Canyon, 30 of them found during excavations at Pueblo Bonito. The researchers tested 14 specimens from Pueblo Bonito and found that one group of six macaw dates fell between 885 and 990.

According to the researchers, 'these scarlet macaws are among the earliest known in the Southwest.' They also note 'these six dates are 50 to 150 years earlier than the dates for scarlet macaw procurement previously postulated by Chacoan scholars.'

Another six macaws date between 970 and 1035, and the final two date between 1015 and 1155. The researchers suggest that these macaws could represent three separate procurement events, the last during the height of architectural growth, but the earliest, long before outward signs of sociopolitical complexity were thought to have appeared.

There are no indications that the people of Pueblo Bonito bred scarlet macaws. Only one of the sample birds was of breeding age and none were exceptionally young. There is also no mention of eggshells in any of the excavation notes, although one room where many of the bird remains were found was probably an aviary.

'This opens a lot of questions,' said Kennett, who is also a research fellow at the American Museum of Natural History. 'How was it done? Where were they getting them from? How likely was it that Southwestern people were going down into Mexico and bringing them back?'

A variety of ways exist to procure goods from far away. Individuals may journey directly from their homes to the location of the goods and then return, or people closer to the source of goods may travel to get them and then pass them on to others farther away, creating a chain of supply that reaches far from the source. The researchers suggest the latter option is unlikely because of the behavior of fledgling scarlet macaws.

'The modern illicit bird trade has made DNA evidence of a variety of tropical birds available,' said Kennett. 'This may make it easier to determine where the birds came from.'

The researchers will next examine scarlet macaw remains from Pueblo Bonito now housed at the Smithsonian Institution.Contacts and sources:
Kendra Snyder
American Museum of Natural History