A human skull, on average, is about 0.3 inches thick, or roughly the depth of the latest smartphone. Human skin, on the other hand, is about 0.1 inches, or about three grains of salt, deep.

While these dimensions are extremely thin, they still present major hurdles for any kind of imaging with laser light.

Why? Laser light contains photons, or miniscule particles of light. When photons encounter biological tissue, they scatter. Corralling the tiny beacons to obtain meaningful details about the tissue has proven one of the most challenging problems laser researchers have faced. 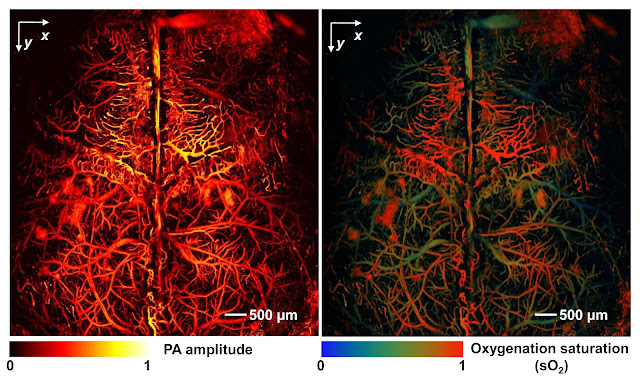 However, one research group at Washington University in St. Louis (WUSTL) decided to eliminate the photon roundup completely and use scattering to their advantage.

The result: An imaging technique that penetrates tissue up to about 2.8 inches. This approach, which combines laser light and ultrasound, is based on the photoacoustic effect, a concept first discovered by Alexander Graham Bell in the 1880s.

In his work, Bell found that a focused light beam produces sound when trained on an object and rapidly interrupted--he used a rotating, slotted wheel to create a flashing effect with sunlight.

Bell's concept is the foundation for photoacoustics, an area of a growing field known as biophotonics, which joins biology and light-based science known as phototonics. Biophotonics bridges photonics principles, engineering and technology that are relevant for critical problems in medicine, biology and biotechnology.

"We combine some very old physics with a modern imaging concept," says WUSTL researcher Lihong Wang, who pioneered the approach.

Photoacoustic imaging, based on a concept Alexander Graham Bell discovered in the 1880s, combines laser light and ultrasound. In this case, at a rate of 20 3-D images per second, scientists are able to study red blood cells in great detail.

Wang and his WUSTL colleagues were the first to describe functional photoacoustic tomography (PAT) and 3-D photoacoustic microscopy (PAM). Both techniques follow the same basic principle: When the researchers shine a pulsed laser beam into biological tissue, it spreads out and generates a small, but rapid rise in temperature. This increase produces sound waves that are detected by conventional ultrasound transducers. Image reconstruction software converts the sound waves into high-resolution images.

Wang first began exploring the combination of sound and light as a post-doctoral researcher.

At the time, he modeled photons as they traveled through biological material. This work led to an NSF CAREER grant to study ultrasound encoding of laser light to "trick" information out of the beam.

"The CAREER grant boosted my confidence and allowed me to study the fundamentals of light and sound in biological tissue, which benefited my ensuing career immensely," he says.

Unlike other optical imaging techniques, photoacoustic imaging detects ultrasonic waves induced by absorbed photons no matter how many times the photons have scattered. Multiple external detectors capture the sound waves regardless of their original locations.

"While the light travels on a highly tortuous path, the ultrasonic wave propagates in a clean and well-defined fashion," Wang says. "We see optical absorption contrast by listening to the object."

While PAT and PAM are primarily used by researchers, Wang and others are working on multiple clinical applications. In one case, researchers use PAM to study the trajectory of blood cells as they flow through vessels in the brain.

"By seeing individual blood cells, researchers can start to identify what's happening to the cells as they move through the vessels. Watching how these cells move could act as an early warning system to allow detection of potential blockage sites," says Richard Conroy, director of the Division of Applied Science and Technology at the National Institute of Biomedical Imaging and Bioengineering.

Because PAT and PAM images can be correlated with those generated using other methods such as magnetic resonance imaging or positron emission tomography, these techniques can complement existing ones.

"One imaging modality can't do everything," says Conroy. "Comparing results from different modalities provides a more detailed understanding of what is happening from the cell level to the whole animal."

The approach could help bridge the gap between animal and human research, especially in neuroscience.

Wang notes that one of the challenges currently facing neuroscientists is the lack of available tools to study brain activity such as action potentials, which occur when electrical signals travel along axons, the long fibers that carry signals away from the nerve cell body.

"The holy grail of brain research is to image action potentials," he says.

With funding from The BRAIN Initiative, Wang and his group are now developing a PAT system to capture images every one-thousandth of a second, fast enough to image action potentials in the brain.

"Photoacoustic imaging fills a gap between light microscopy and ultrasound," says Conroy. "The game-changing aspect of this [Wang's] approach is that it has redefined our understanding of how deep we can see with light-based imaging."