For many generations, Bedouin people living in the Abu Dabbab area on the Egyptian Red Sea coast have heard distinct noises--like the rumbling of a quarry blast or cannon shot--accompanying small earthquakes in the region. Now, a new study published in the Bulletin of the Seismological Society of America offers an explanation for this uniquely noisy seismic event.

Seismic activity in the area of the Egyptian seaside resort Abu Dabbab may be caused by an active fault that lays below a 10-kilometer thick block of old, now rigid igneous rock. The surface of the block slides along the active parts of the fault, lubricated by fluids from the Red Sea that have penetrated the crust, according to Sami El Khrepy of King Saud University in Riyadh, Saudi Arabia and colleagues. 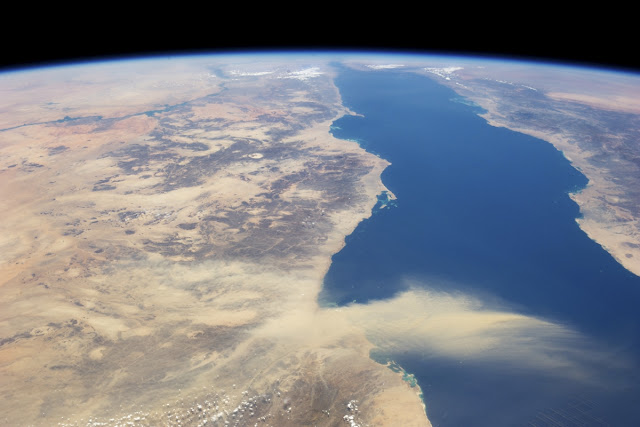 The researchers think this large and rigid block of igneous crust acts as a sort of broadcaster, allowing the full sounds of seismic movement to rise through the rock with little weakening of the acoustic signal. The high-frequency sounds of earthquakes can then be heard by humans at the surface.

Earlier studies had suggested that the Abu Dabbab earthquakes were caused by magma rising through the crust, but the new report "found that a volcanic origin of the seismicity is unlikely, and the area is not expected to be subjected to volcanic hazard," said El Khrepy.

Earthquake swarms are frequent in this area of the northern Red Sea near Abu Dabbab, but most of the earthquakes are weak, ranging in magnitude from 0.3 to 3.5. The largest well-documented earthquakes, measuring magnitude 6.1 and magnitude 5.1, occurred in 1955 and 1984, respectively.

El Khrepy and colleagues decided to take a closer look at the structure of the Abu Dabbab crust, to determine the origin of this seismicity. To peer into the crust, they combined data from local earthquake monitoring with a new set of local and regional earthquake data collected by the National Seismic Network of Egypt (ENSN), which was completed in 2002. They then applied a technique called seismic tomography, which uses data on the speed of seismic waves traveling through different rock types to develop a 3-D map of some of the subsurface geological features in the area.

"This study is the first detailed look at the seismic tomography in this region of Abu Dabbab's cannon earthquakes," said El Khrepy, "It was not possible to do this work without ENSN deployment."

The researchers determined that the earthquakes at Abu Dabbab extend in a line from the coast into the Red Sea, "and the seismicity pattern is arc-shaped in depth, confined to the dome-like structure of the rigid igneous body that formed during the Precambrian era'' above an active fault, El Khrepy said.

The strike-slip and thrust movements of the fault may drive water from the Red Sea in between the fault and the surface of the igneous block, allowing the two to slip past each other, the scientists suggest.

"Based on the new results and also the historical data," El Khrepy concluded, "we report that the confined seismicity in this zone is of tectonic, and not volcanic, origin."