A new Stanford study finds that the recent spike in triggered earthquakes in Oklahoma is primarily due to the injection of wastewater produced during oil production – but not from fracking. 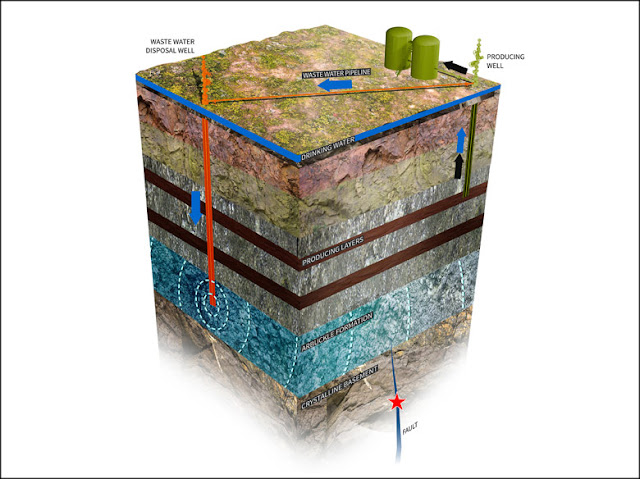 Stanford geophysicists have identified the triggering mechanism responsible for the recent spike of earthquakes in parts of Oklahoma – a crucial first step in eventually stopping them.

In a new study published in the June 19 issue of the journal Science Advances, Stanford Professor Mark Zoback and doctoral student Rall Walsh show that the state's rising number of earthquakes coincided with dramatic increases in the disposal of salty wastewater into the Arbuckle formation, a 7,000-foot-deep sedimentary formation under Oklahoma.

In addition, the pair showed that the primary source of the quake-triggering wastewater is not so-called "flowback water" generated after hydraulic fracturing operations. Rather, the culprit is "produced water" – brackish water that naturally coexists with oil and gas within the Earth. Drilling companies separate produced water from extracted oil and gas and typically reinject it into deeper disposal wells.

"What we've learned in this study is that the fluid injection responsible for most of the recent quakes in Oklahoma is due to production and subsequent injection of massive amounts of wastewater, and is unrelated to hydraulic fracturing," said Zoback, the Benjamin M. Page Professor in the School of Earth, Energy & Environmental Sciences.

The Stanford study results were a major contributing factor in the recent decision by the Oklahoma Geological Survey (OGS) to issue a statement that said it was "very likely" that most of the state's recent earthquakes are due to the injection of produced water into disposal wells that extend down to, or even beyond, the Arbuckle formation.

"The Stanford scientists' findings were carefully considered before we issued the statement, and contributed to the scientific credibility of the statement," said OGS state seismologist Austin Holland, who was not involved in the study.

"We've been waiting for exactly this type of study," said Michael Teague, Oklahoma's Secretary of Energy & Environment. "These findings help us understand the case better so that we can evaluate options that we can take to go forward in finding ways to reduce the quakes."

Rex Buchanan, interim director of the Kansas Geological Survey (KGS), said the Stanford study fills a critical hole in scientific discussions about what is behind the recent quakes plaguing the Midwest. "Many experts have known that the volumes of produced water going into disposal wells greatly dwarf the volumes of flowback water from hydraulic fracturing. But quantifying that is important, and what Mark and Rall have done here is to provide hard numbers to those volumes," said Buchanan, who also did not participate in the study.
Recent increases in seismicity

Before 2008, Oklahoma experienced one or two magnitude 4 earthquakes per decade, but in 2014 alone, the state experienced 24 such seismic events. Although the earthquakes are felt throughout much of the state, they pose little danger to the public, but scientists say that the possibility of triggering larger, potentially damaging earthquakes cannot be discounted.

Because the pair were also able to review data about the total amount of wastewater injected at wells, as well as the total amount of hydraulic fracturing happening in each study area, they were able to conclude that the bulk of the injected water was produced water generated using conventional oil extraction techniques, not during hydraulic fracturing.

"We know that some of the produced water came from wells that were hydraulically fractured, but in the three areas of most seismicity, over 95 percent of the wastewater disposal is produced water, not hydraulic fracturing flowback water," said Zoback, who is also a senior fellow at Stanford's Precourt Institute for Energy and director of the university's recently launched Natural Gas Initiative, which is focused on ensuring that natural gas is developed and used in ways that are economically, environmentally and societally optimal.
Time delay explained

The three study areas in Oklahoma that Zoback and Walsh looked at all showed a time delay between peak injection rate and the onset of seismicity, as well as spatial separations between the epicenter of the quakes and the injection well sites. Some of the quakes occurred months or even years after injection rates peaked and in locations that were sometimes located miles away from any wells.

These discrepancies had previously puzzled scientists, and had even been used by some to argue against a link between wastewater disposal and triggered earthquakes, but Zoback said they are easily explained by a simple conceptual model for Oklahoma's seismicity that his team has developed.

According to this model, wastewater disposal is increasing the pore pressure in the Arbuckle formation, the disposal zone that sits directly above the crystalline basement, the rock layer where earthquake faults lie. Pore pressure is the pressure of the fluids within the fractures and pore spaces of rocks at depth. The earth's crust contains many pre-existing faults, some of which are geologically active today. Shear stress builds up slowly on these faults over the course of geologic time, until it finally overcomes the frictional strength that keeps the two sides of a fault clamped together. When this happens, the fault slips, and energy is released as an earthquake.

Active faults in Oklahoma might trigger an earthquake every few thousand years. However, by increasing the fluid pressure through disposal of wastewater into the Arbuckle formation in the three areas of concentrated seismicity – from about 20 million barrels per year in 1997 to about 400 million barrels per year in 2013 – humans have sped up this process dramatically. "The earthquakes in Oklahoma would have happened eventually," Walsh said. "But by injecting water into the faults and pressurizing them, we've advanced the clock and made them occur today."

Moreover, because pressure from the wastewater injection is spreading throughout the Arbuckle formation, it can affect faults located far from well sites, creating the observed time delay. "You can easily imagine that if a fault wasn't located directly beneath a well, but several miles away, it would take time for the fluid pressure to propagate," Walsh said.

Buchanan of the KGS noted that Kansas shares many of the same underlying geological features as its southern neighbor. "The team's findings for Oklahoma are applicable to Kansas," Buchanan said.
Possible solutions

Now that the source of the recent quakes in Oklahoma is known, scientists and regulators can work on ways to stop them. One possible solution, Zoback said, would be to cease injection of produced water into the Arbuckle formation entirely, and instead inject it back into producing formations such as the Mississippian Lime, an oil-rich limestone layer where much of the produced water in Oklahoma comes from in the first place.

Some companies already reinject water back into reservoirs in order to displace remaining oil and make it easier to recover. The Stanford study found that this technique, called enhanced oil recovery, does not result in increased earthquakes.

Even if companies opt to use producing formations to store wastewater, however, the quakes won't cease immediately. "They've already injected so much water that the pressure is still spreading throughout the Arbuckle formation," Zoback said. "The earthquakes won't stop overnight, but they should subside over time."

The study, titled "Oklahoma's Recent Earthquakes and Saltwater Disposal," was funded by the Stanford Center for Induced and Triggered Seismicity, an affiliate program at the School of Earth, Energy & Environmental Sciences.