Genetic analysis of a 40,000-year-old jawbone from Romania reveals that early modern humans interbred with Neandertals when they first came to Europe.

Neandertals became extinct about 40,000 years ago but contributed on average one to three percent to the genomes of present-day Eurasians. Researchers have now analyzed DNA from a 37,000 to 42,000-year-old human mandible from Oase Cave in Romania and have found that six to nine percent of this person's genome came from Neandertals, more than any other human sequenced to date. Because large segments of this individual's chromosomes are of Neandertal origin, a Neandertal was among his ancestors as recently as four to six generations back in his family tree. This shows that some of the first modern humans that came to Europe mixed with the local Neandertals.

DNA taken from a 40,000-year-old modern human jawbone reveals that this man had a Neandertal ancestor as recently as four to six generations back. 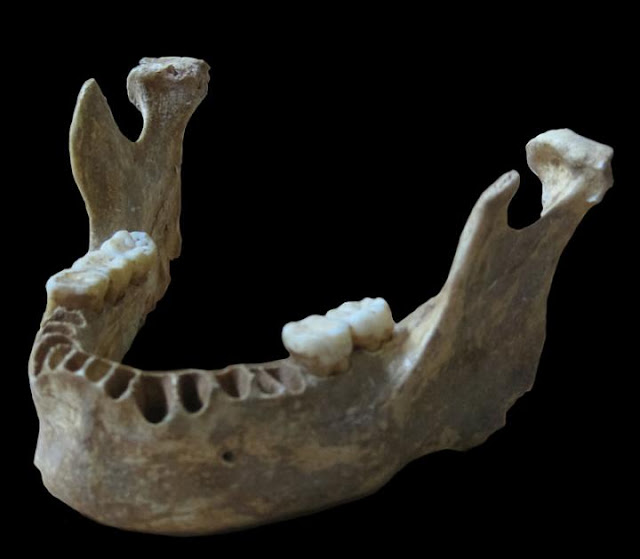 All present-day humans who have their roots outside sub-Saharan Africa carry one to three percent of Neandertal DNA in their genomes. Until now, researchers have thought it most likely that early humans coming from Africa mixed with Neandertals in the Middle East around 50,000 to 60,000 years ago, before spreading into Asia, Europe and the rest of the world. However, radiocarbon dating of remains from sites across Europe suggests that modern humans and Neandertals both lived in Europe for up to 5,000 years and that they may have interbred there, too.

In 2002, a 40,000-year-old jawbone was found by cavers in Oase Cave in south-western Romania and the site was subsequently studied by an international team led by the researchers of the Emil Racovita Institute of Speleology in Romania. Researchers from the Max Planck Institute for Evolutionary Anthropology (Germany), Harvard Medical School (USA), and the Key Laboratory of Vertebrate Evolution and Human Origins in Beijing (China) have now analyzed DNA from this fossil, which is one of the earliest modern-human remains found in Europe.

For their analysis the researchers used 35 milligrams of bone powder from the jawbone. 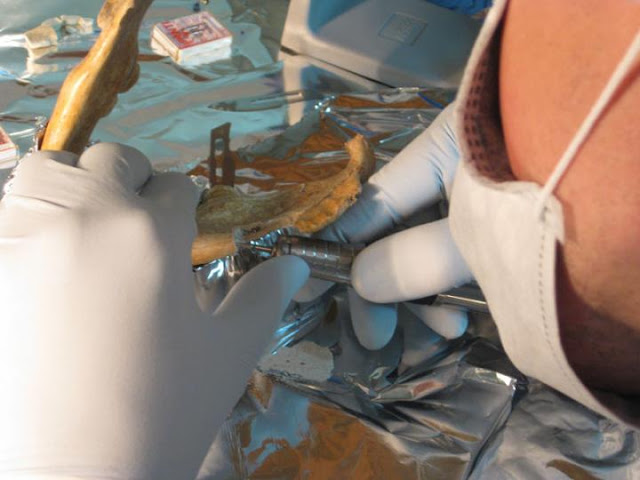 They estimate that five to 11 percent of the genome preserved in the bone derives from a Neandertal ancestor, including exceptionally large segments of some chromosomes. By estimating how lengths of DNA inherited from an ancestor shorten with each generation, the researchers estimated that the man had a Neandertal ancestor in the previous four to six generations.

"The data from the jawbone imply that humans mixed with Neandertals not just in the Middle East but in Europe as well" says Qiaomei Fu, one of the lead researchers of the study. "Interestingly, the Oase individual does not seem to have any direct descendants in Europe today," says David Reich from Harvard Medical School who coordinated the population genetic analyses of the study. "It may be that he was part of an early migration of modern humans to Europe that interacted closely with Neandertals but eventually became extinct".

"It is such a lucky and unexpected thing to get DNA from a person who was so closely related to a Neandertal" comments Svante Paabo from the Max Planck Institute for Evolutionary Anthropology who led the study. "I could hardly believe it when we first saw the results." "We hope that DNA from other human fossils that predate the extinction of Neandertals will help reconstruct the interactions between Neandertals and modern humans in even more detail", says Mateja Hajdinjak, another key researcher involved in the study.

"When we started the work on Oase site, everything was already pointing to an exceptional discovery", remembers Oana Moldovan, the Romanian researcher who initiated the systematic excavation of the cave in 2003. "But such discoveries require painstaking research to be confirmed", adds Silviu Constantin, her colleague who worked on dating of the site. "We have previously shown that Oase is indeed the oldest modern human in Europe known so far, and now this research confirms that the individual had a Neandertal ancestor. What more could we wish for?"