NASA's Swift satellite detected a rising tide of high-energy X-rays from the constellation Cygnus on June 15, just before 2:32 p.m. EDT. About 10 minutes later, the Japanese experiment on the International Space Station called the Monitor of All-sky X-ray Image (MAXI) also picked up the flare. 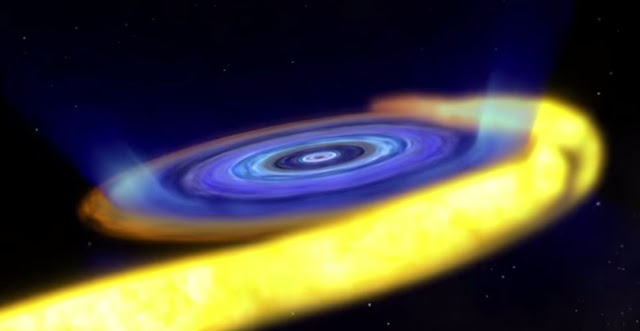 On June 15, NASA's Swift caught the onset of a rare X-ray outburst from a stellar-mass black hole in the binary system V404 Cygni. Astronomers around the world are watching the event. In this system, a stream of gas from a star much like the sun flows toward a 10 solar mass black hole. Instead of spiraling toward the black hole, the gas accumulates in an accretion disk around it. Every couple of decades, the disk switches into a state that sends the gas rushing inward, starting a new outburst.

The outburst came from V404 Cygni, a binary system located about 8,000 light-years away that contains a black hole. Every couple of decades the black hole fires up in an outburst of high-energy light, becoming an X-ray nova. Until the Swift detection, it had been slumbering since 1989.

An X-ray nova is a bright, short-lived X-ray source that reaches peak intensity in a few days and then fades out over a period of weeks or months. The outburst occurs when stored gas abruptly rushes toward a neutron star or black hole. By studying the patterns of the X-rays produced, astronomers can determine the kind of object at the heart of the eruption.

"Relative to the lifetime of space observatories, these black hole eruptions are quite rare," said Neil Gehrels, Swift's principal investigator at NASA's Goddard Space Flight Center in Greenbelt, Maryland. "So when we see one of them flare up, we try to throw everything we have at it, monitoring across the spectrum, from radio waves to gamma rays."

Astronomers classify this type of system as a low-mass X-ray binary. In V404 Cygni, a star slightly smaller than the sun orbits a black hole 10 times its mass in only 6.5 days. The close orbit and strong gravity of the black hole produce tidal forces that pull a stream of gas from its partner. The gas travels to a storage disk around the black hole and heats up to millions of degrees, producing a steady stream of X-rays as it falls inward.

But the disk flips between two dramatically different conditions. In its cooler state, the gas resists inward flow and just collects in the outer part of the disk like water behind a dam. Inevitably the build-up of gas overwhelms the dam, and a tsunami of hot bright gas rushes toward the black hole.

Astronomers relish the opportunity to collect simultaneous multiwavelength data on black hole binaries, especially one as close as V404 Cygni. In 1938 and 1956, astronomers caught V404 Cygni undergoing outbursts in visible light. During its eruption in 1989, the system was observed by Ginga, an X-ray satellite operated by Japan, and instruments aboard Russia's Mir space station.

V404 Cygni has flared many times since the eruption began, with activity ranging from minutes to hours. "It repeatedly becomes the brightest object in the X-ray sky -- up to 50 times brighter than the Crab Nebula, which is normally one of the brightest sources," said Erik Kuulkers, the INTEGRAL project scientist at ESA's European Space Astronomy Centre in Madrid. "It is definitely a 'once in a professional lifetime' opportunity."

In a single week, flares from V404 Cygni generated more than 70 "triggers" of the Gamma-ray Burst Monitor (GBM) aboard Fermi. This is more than five times the number of triggers seen from all objects in the sky in a typical week. The GBM triggers when it detects a gamma-ray flare, then it sends numerous emails containing increasingly refined information about the event to scientists on duty.

Every time the GBM recovered from one trigger, V404 Cygni set it off again, resulting in a torrent of emails. The event prompted David Yu, a GBM scientist at the Max Planck Institute of Extraterrestrial Physics in Garching, Germany, to comment on social media: "Achievement Unlocked: Mailbox spammed by a blackhole."