Most Kangaroos Are Lefties Say Researchers

Kangaroos prefer to use one of their hands over the other for everyday tasks in much the same way that humans do, with one notable difference: generally speaking, kangaroos are lefties. The finding, reported in the Cell Press journal Current Biology on June 18--the first to consider handedness in wild kangaroos--challenges the notion that "true" handedness among mammals is a feature unique to primates.

This is a red-necked wallaby manipulating food with one forelimb. 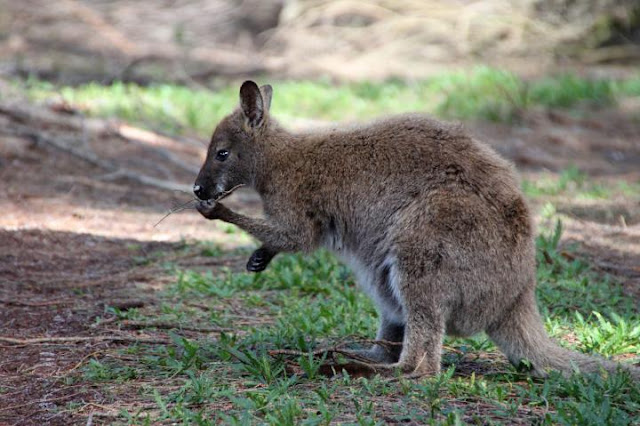 Courtesy of Andrey Giljov and the National Geographic Society.

"According to a special-assessment scale of handedness adopted for primates, kangaroos pulled down the highest grades," says Yegor Malashichev of Saint Petersburg State University in Russia. "We observed a remarkable consistency in responses across bipedal species in that they all prefer to use the left, not the right, hand."

Malashichev's interest in handedness goes back at least a decade, when he reported differences in handedness between jumping and walking frogs. Those studies showed that jumping frogs less often show handedness than do walking frogs. His team later showed subtle signs of handedness in marsupials that walk on all fours, including gray short-tailed opossums and sugar gliders, which differed by sex. But no one had taken a careful look at different species of bipedal kangaroos.

This is an Eastern grey kangaroo manipulating food with one forelimb. 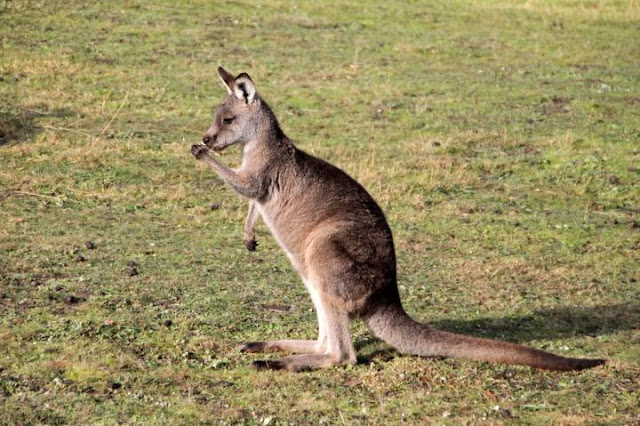 Courtesy of Andrey Giljov and the National Geographic Society

One reason true handedness wasn't expected in kangaroos--or other marsupials, for that matter--is because, unlike other mammals, they lack the same neural circuit that bridges the left and right hemispheres of the brain. Studies of kangaroos living in captivity hadn't yielded conclusive evidence either. In the new study, to find out what wild kangaroos really do when left to their own devices, the researchers watched these iconic animals in Tasmania and continental Australia.

"What we observed in reality we did not initially expect," Malashichev says. "But the more we observed, the more it became obvious that there is something really new and interesting in the wild."

They found that wild kangaroos show a natural preference for their left hands when performing particular actions--grooming the nose, picking a leaf, or bending a tree branch, for example. Left-handedness was particularly apparent in eastern grey and red kangaroos.

This is a red-necked wallaby manipulating food with one forelimb. 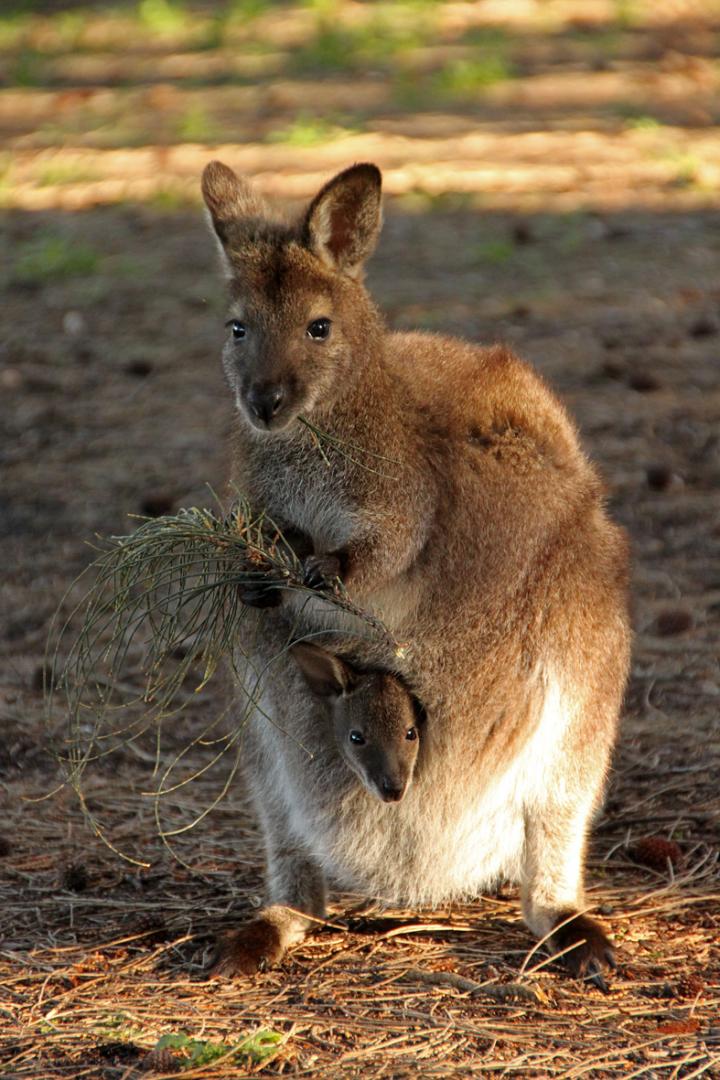 Courtesy of Andrey Giljov and the National Geographic Society.

Red-necked wallabies prefer their left hand for some tasks and their right for others. Generally speaking, they use their left forelimb for tasks that involve fine manipulation and the right for tasks that require more physical strength. The researchers found less evidence for handedness in species that spend their days in the trees.

The findings should encourage more careful study of the marsupial brain, which differs from those of other mammals in many respects. Such studies might even yield important insight into neuropsychiatric conditions, including schizophrenia and autism, the researchers say, noting links between those disorders and handedness.

The researchers will continue to explore handedness in other species that stand upright regularly or from time to time. "This will give us a better resolution for the evolutionary interpretations," Malashichev says.

The National Geographic Society Committee for Research and Exploration supported the fieldwork done in this study.