The tiny tube circled an ant's thorax, gently trapping the insect and demonstrating the utility of a microrobotic tentacle developed by Iowa State University engineers.

"Most robots use two fingers and to pick things up they have to squeeze," said Jaeyoun (Jay) Kim, an Iowa State University associate professor of electrical and computer engineering and an associate of the U.S. Department of Energy's Ames Laboratory. "But these tentacles wrap around very gently."

A micro-tentacle developed by Iowa State engineers spirals around an ant. 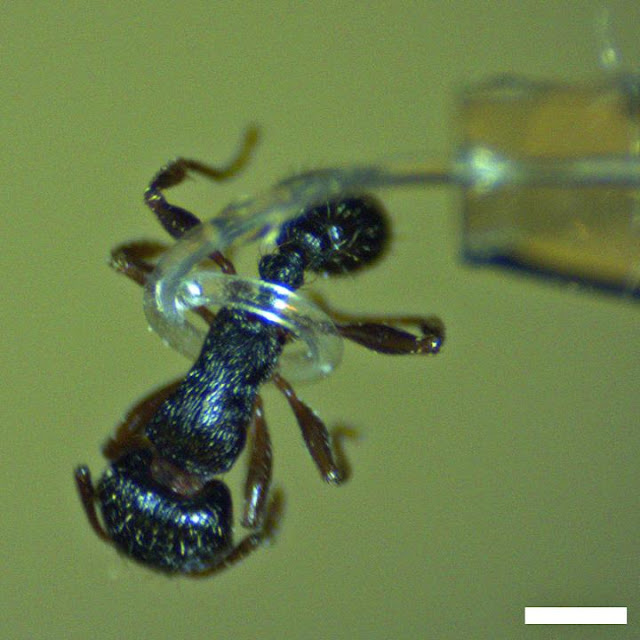 And that makes them perfect hands and fingers for small robots designed to safely handle delicate objects.

The spiraling microrobotic tentacles are described in a research paper recently published in the journal Scientific Reports. Kim is the lead author. Co-authors are In-Ho Cho, an Iowa State assistant professor of civil, construction and environmental engineering; and Jungwook Paek, who recently earned his Iowa State doctorate in electrical and computer engineering and is moving to post-doctoral work at the University of Pennsylvania in Philadelphia.

The paper describes how the engineers fabricated microtubes just 8 millimeters long and less than a hundredth of an inch wide. They're made from PDMS, a transparent elastomer that can be a liquid or a soft, rubbery solid. Kim, whose research focus is micro-electro-mechanical systems, has worked with the material for about a decade and has patented a process for making thin wires from it.

The paper also describes how the researchers sealed one end of the tube and pumped air in and out. The air pressure and the microtube's asymmetrical wall thickness created a circular bend. They further describe how they added a small lump of PDMS to the base of the tube to amplify the bend and create a two-turn spiraling, coiling action.

And that's just what the engineers wanted:

"Spiraling tentacles are widely utilized in nature for grabbing and squeezing objects," the engineers wrote in the paper. "There have been continuous soft-robotic efforts to mimic them..., but the life-like, multi-turn spiraling motion has been reproduced only by centimeter-scale tentacles so far. At millimeter and sub-millimeter scales, they could bend only up to a single turn."

It took a lot of problem solving to create the extra turn in the microrobotic tentacles. "Yes, we scratched our heads a lot," Kim said.

Jaeyoun (Jay) Kim holds a syringe with a micro-tentacle attached. Behind Kim is the system of nozzles, micro-manipulators and microscopic cameras developed by his research group to shape soft, rubbery PDMS material. 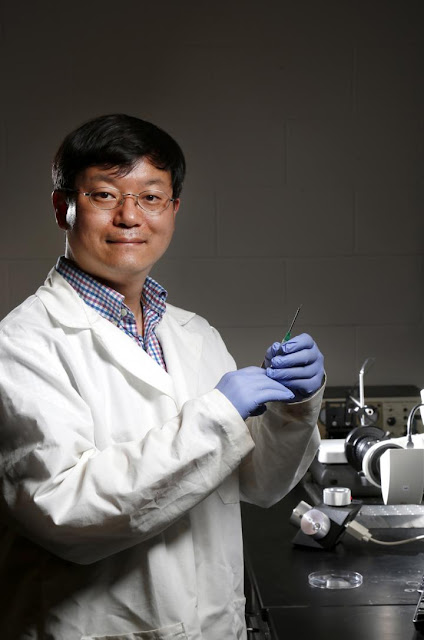 Kim said the project is a nice combination of two new trends in robotics: