Lasers on the Road to Ubiquity

When the National Science Foundation (NSF) was founded in 1950, the laser didn't exist. Some 65 years later, the technology is ubiquitous.

As a tool, the laser has stretched the imaginations of countless scientists and engineers, making possible everything from stunning images of celestial bodies to high-speed communications. Once described as a "solution looking for a problem," the laser powered and pulsed its way into nearly every aspect of modern life.

Laser light can cool atoms, in this case ytterbium atoms (central sphere), to temperatures so low that the atoms appear nearly motionless. A laser trap made from magnetic fields and laser light can capture the atoms so physicists can study their quantum behaviors. 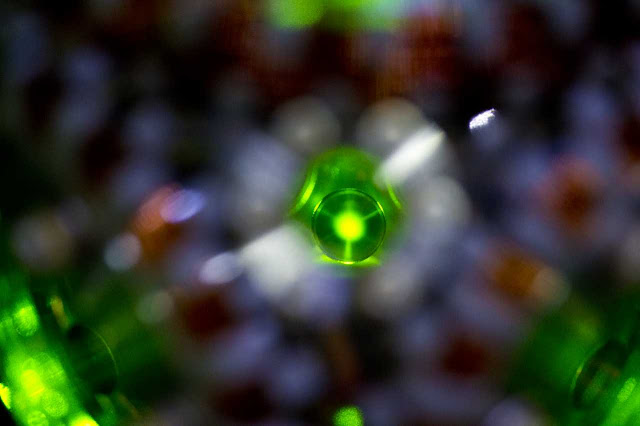 For its part, NSF funding enabled research that has translated into meaningful applications in manufacturing, communications, life sciences, defense and medicine. NSF also has played a critical role in training the scientists and engineers who perform this research.

"We enable them [young researchers] at the beginning of their academic careers to get funding and take the next big step," said Lawrence Goldberg, senior engineering adviser in NSF's Directorate for Engineering.

During the late 1950s and throughout the 1960s, major industrial laboratories run by companies such as Hughes Aircraft Company, AT&T and General Electric supported laser research as did the Department of Defense. These efforts developed all kinds of lasers--gas, solid-state (based on solid materials), semiconductor (based on electronics), dye and excimer (based on reactive gases). 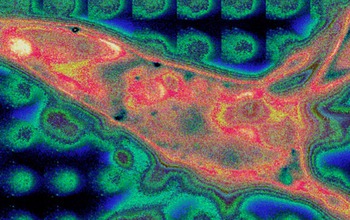 Like the first computers, early lasers were often room-size, requiring massive tables that held multiple mirrors, tubes and electronic components. Inefficient and power-hungry, these monoliths challenged even the most dedicated researchers. Undaunted, they refined components and techniques required for smooth operation.

As the 1960s ended, funding for industrial labs began to shrink as companies scaled back or eliminated their fundamental research and laser development programs. To fill the void, the federal government and emerging laser industry looked to universities and NSF.

Despite budget cuts in the 1970s, NSF funded a range of projects that helped improve all aspects of laser performance, from beam shaping and pulse rate to energy consumption. Support also contributed to developing new materials essential for continued progress toward new kinds of lasers. As efficiency improved, researchers began considering how to apply the technology.

Charge of the lightwave

One area in particular, data transmission, gained momentum as the 1980s progressed. NSF's Lightwave Technology Program in its engineering directorate was critical not only because the research it funded fueled the Internet, mobile devices and other high-bandwidth communications applications, but also because many of the laser advances in this field drove progress in other disciplines.

An important example of this crossover is optical coherence tomography (OCT). Used in the late 1980s in telecommunications to find faults in miniature optical waveguides and optical fibers, this imaging technique was adapted by biomedical researchers in the early 1990s to noninvasively image microscopic structures in the eye. The imaging modality is now commonly used in ophthalmology to image the retina. NSF continues to fund OCT research.

As laser technology matured through the 1990s, applications became more abundant. Lasers made their way to the factory floor (to cut, weld and drill) and the ocean floor (to boost signals in transatlantic communications). The continued miniaturization of lasers and the advent of optical fibers radically altered medical diagnostics as well as surgery.

The press release announcing the awards described optical science and engineering as "an 'enabling' technology" and went on to explain that "for such a sweeping field, the broad approach...emphasizing collaboration between disciplines, is particularly effective. By coordinating program efforts, the NSF has encouraged cross-disciplinary linkages that could lead to major findings, sometimes in seemingly unrelated areas that could have solid scientific as well as economic benefits."

"There is an advantage in supporting groups that can bring together the right people," said Denise Caldwell, director of NSF's Division of Physics. In one such case, she says NSF's support of the Center for Ultrafast Optical Science (CUOS) at the University of Michigan led to advances in multiple areas including manufacturing, telecommunications and precision surgery.

An artist's depiction of a coherent (laser-like) x-ray pulse. These rainbows can support extremely short, attosecond light pulses. For comparison, one attosecond is the time it takes for light to travel the length of three hydrogen atoms. 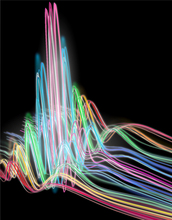 Although they transferred the technology to the Ford Motor Company, a young physician at the university heard about the capability and contacted the center. The collaboration between the clinician and CUOS researchers led to IntraLASIK technology used by ophthalmologists for cornea surgery as well as a spin-off company, Intralase (funded with an NSF Small Business Innovative Research grant).

More recently, NSF support of the Engineering Research Center for Extreme Ultraviolet Science and Technology at Colorado State University has given rise to the development of compact ultrafast laser sources in the extreme UV and X-ray spectral regions.

This work is significant because these lasers will now be more widely available to researchers, diminishing the need for access to a large source like a synchrotron. Compact ultrafast sources are opening up entirely new fields of study such as attosecond dynamics, which enables scientists to follow the motion of electrons within molecules and materials.

NSF's ability to foster collaborations within the scientific community has also enabled it to identify new avenues for research. As laser technology matured in the late 1980s, some researchers began to consider the interaction of laser light with biological material. Sensing this movement, NSF began funding research in this area.

"Optics has been a primary force in fostering this interface," Caldwell said.

One researcher who saw NSF taking the lead in pushing the frontiers of light-matter interactions was University of Michigan researcher Duncan Steel.

At the time, Steel continued pursuing quantum electronics research while using lasers to enable imaging and spectroscopy of single molecules in their natural environment. Steel and his colleagues were among the first to optically study how molecular self-assembly of proteins affects the neurotoxicity of Alzheimer's disease.

"New classes of light sources and dramatic changes in detectors and smart imaging opened up new options in biomedical research," Steel said. "NSF took the initiative to establish a highly interdisciplinary direction that then enabled many people to pursue emergent ideas that were rapidly evolving. That's one of NSF's biggest legacies--to create new opportunities that enable scientists and engineers to create and follow new directions for a field."

Roadmaps for the future

In the mid-1990s, the optical science and engineering research community expressed considerable interest in developing a report to describe the impact the field was having on national needs as well as recommend new areas that might benefit from focused effort from the community.

As a result, in 1998, the National Research Council (NRC) published Harnessing Light: Optical Science and Engineering for the 21st Century. Funded by the Defense Advanced Research Projects Agency, NSF and the National Institute of Standards and Technology (NIST), the 331-page report was the first comprehensive look at the laser juggernaut.

That report was significant because, for the first time, the community focused a lens on its R&D in language that was accessible to the public and to policymakers. It also laid the groundwork for subsequent reports. Fifteen years after Harnessing Light, NSF was the lead funding agency for another NRC report, Optics and Photonics: Essential Technologies for Our Nation.

The committee, comprised of 14 federal agencies and co-chaired by NSF and NIST, would identify cross-cutting areas of optics and photonics research that, through interagency collaboration, could benefit the nation. It also was also set to prioritize these research areas for possible federal investment and set long-term goals for federal optics and photonics research.

One of the recommendations from the NRC Optics and Photonics report was creation of a national photonics initiative to identify critical technical priorities for long-term federal R&D funding. To develop these priorities, the initiative would draw on researchers from industry, universities and the government as well as policymakers. Their charge: Provide a more integrated approach to industrial and federal optics and photonics R&D spending.

In just a year, the National Photonics Initiative was formed through the cooperative efforts of the Optical Society of America, SPIE--the international society for optics and photonics, the IEEE Photonics Society, the Laser Institute of America and the American Physical Society Division of Laser Science. One of the first fruits of this forward-looking initiative is a technology roadmap for President Obama's BRAIN Initiative.

To assess NSF's own programs and consider future directions, the agency formed an optics and photonics working group in 2013 to develop a roadmap to "lay the groundwork for major advances in scientific understanding and creation of high-impact technologies for the next decade and beyond."

The working group, led by Goldberg and Charles Ying, from NSF's Division of Materials Research, inventoried NSF's annual investment in optics and photonics. Their assessment showed that NSF invests about $300 million each year in the field.

As a next step, NSF also formed an optics and photonics advisory subcommittee for its Mathematical and Physical Sciences Directorate Advisory Committee. In its final report released in July 2014, the subcommittee identified seven research areas that could benefit from additional funding, including nanophotonics, new imaging modalities and optics and photonics for astronomy and astrophysics.

That same month, NSF released a "Dear Colleague Letter" to demonstrate the foundation's growing interest in optics and photonics and to stimulate a pool of proposals, cross-disciplinary in nature, that could help define new research directions.

And so the laser, once itself the main focus of research, takes its place as a device that extends our ability to see.

"To see is a fundamental human drive," Caldwell said. "If I want to understand a thing, I want to see it. The laser is a very special source of light with incredible capabilities."