Do Rats 'Dream' Paths to a Brighter Future?

When rats rest, their brains simulate journeys to a desired future such as a tasty treat, finds new University College London (UCL) research funded by the Wellcome Trust and Royal Society.

The researchers monitored brain activity in rats, first as the animals viewed food in a location they could not reach, then as they rested in a separate chamber, and finally as they were allowed to walk to the food. The activity of specialised brain cells involved in navigation suggested that during the rest the rats simulated walking to and from food that they had been unable to reach.

An illustration of a sleeping rat. This was part of a paper published in the open access eLife journal suggesting that rats 'dream' paths to a brighter future. The research at UCL (University College London) found that when rats rest, their brains simulate journeys to a desired future such as a tasty treat. 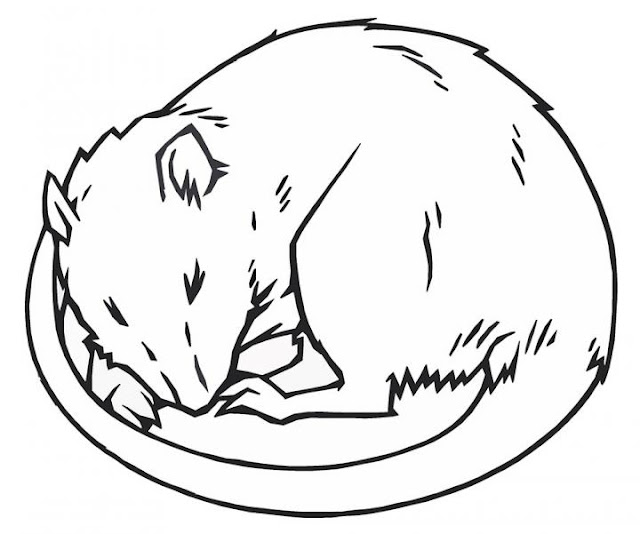 The study, published in the open access journal eLife, could help to explain why some people with damage to a part of the brain called the hippocampus are unable to imagine the future.

"During exploration, mammals rapidly form a map of the environment in their hippocampus," says senior author Dr Hugo Spiers (UCL Experimental Psychology). "During sleep or rest, the hippocampus replays journeys through this map which may help strengthen the memory. It has been speculated that such replay might form the content of dreams. Whether or not rats experience this brain activity as dreams is still unclear, as we would need to ask them to be sure! Our new results show that during rest the hippocampus also constructs fragments of a future yet to happen. Because the rat and human hippocampus are similar, this may explain why patients with damage to their hippocampus struggle to imagine future events."

In the experiment, animals were individually placed on a straight track with a T-junction ahead. Access to the junction as well as the left and right hand arms beyond it was prevented by a transparent barrier. One of the arms had food at the end, the other side was empty. After observing the food the rats were put in a sleep chamber for an hour. Finally after the barrier was removed, the animals were returned to the track and allowed to run across the junction and on to the arms.

During the rest period, the data showed that place cells that would later provide an internal map of the food arm were active. Cells representing the empty arm were not activated in this way. This indicates that the brain was simulating or preparing future paths leading to a desired goal.

"What's really interesting is that the hippocampus is normally thought of as being important for memory, with place cells storing details about locations you've visited," explains co-lead author Dr Freyja Ólafsdóttir (UCL Biosciences). "What's surprising here is that we see the hippocampus planning for the future, actually rehearsing totally novel journeys that the animals need to take in order to reach the food."

The results suggest that the hippocampus plans routes that have not yet happened as well as recording those that have already happened, but only when there is a motivational cue such as food. This may also imply the ability to imagine future events is not a uniquely human ability.

"What we don't know at the moment is what these neural simulations are actually for," says co-lead author Dr Caswell Barry (UCL Biosciences). "It seems possible this process is a way of evaluating the available options to determine which is the most likely to end in reward, thinking it through if you like. We don't know that for sure though and something we'd like to do in the future is try to establish a link between this apparent planning and what the animals do next."