Virginia Tech engineers have shed light on what happens to a nearby particle when bubbles burst.

Sunghwan Jung, an assistant professor of biomedical engineering and mechanics in the College of Engineering, has discovered new information about a phenomenon called cavitation, the process of bubble formation in a fluid like water.

US Navy - "Controllable-Pitch Propeller in Large Cavitation Channel. Used for over 20 years from the 1940s, controllable-pitch propellers had been limited in the shaft horsepower (shp) they could sustain. Center work to improve their ability to take stresses up to 60,000 shp won a presidential level award." 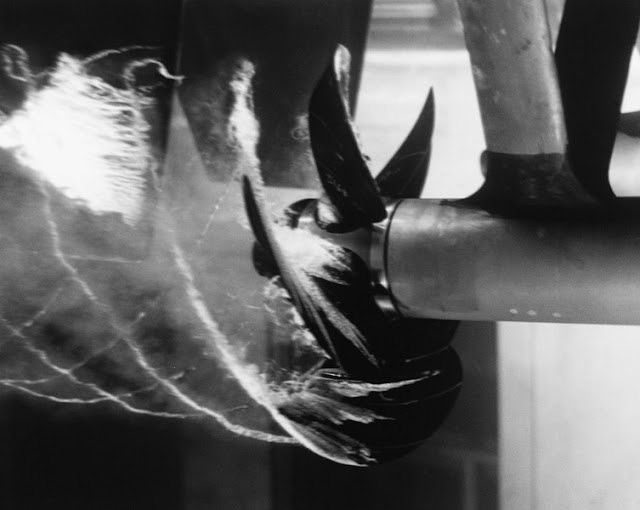 These bubbles eventually collapse under the pressure of the surrounding fluid, sending out pressure waves that can affect anything nearby. For example, shrimp use cavitation bubbles to hunt because the waves can kill small fish.

Cavitation bubbles can also damage boat propellers, which produce the bubbles when they rapidly slice through the water, lowering the pressure. But cavitation also has useful medical and industrial applications, like breaking up kidney stones and shattering clumps of dirt during wastewater processing.

In those cases, the objects affected are much larger than the collapsing bubble. Cavitation could have promising applications for smaller particles, too, but “there are a lot of unknowns about what happens to small particles near the bubble,” Jung said.

Jung’s study, published May 27 in the journal Physical Review Letters, explores the effect of cavitation on nearby particles that are about the same size as the bubble itself, which may be useful for manufacturing cleaning substances without having to use chemicals.

Cavitation bubbles can be created either by lowering the pressure, as a boat propeller does, or by increasing the temperature, as in a pot of boiling water.

Jung’s experiments used localized heat to study what happened when a bubble popped near a particle. Thin wires generated a spark near a particle suspended on a rod. The spark heated the fluid, creating a cavitation bubble that eventually pops.

Jung monitored the whole process — which takes less than three milliseconds — with a high-speed video camera.

The high-speed footage revealed that the particle moved towards the popped bubble.

“When the bubble collapses, it brings in all the material nearby; it’s like a black hole,” Jung said.

How strongly the particle is drawn towards the cavitation site depends on the particle’s size — smaller particles move more quickly — and its initial distance from the bubble.

The high-speed camera captured another effect. The primary bubble bursts into a cloud of micro-bubbles that appear to hammer the approaching particle.

The bombardment is a result of the bubble's asymmetric collapse. The side of the bubble away from the particle, where there’s plenty of extra fluid, collapses faster. That pushes the spray of tiny bubbles towards the particle — but doesn’t significantly interrupt the particle’s movement towards the collapsed bubble.

Because cavitation pulls on small particles, Jung envisions that it could be used as a method for cleaning agricultural produce without chemical agents. Small bubbles could draw microbes and dirt away from produce without damaging the surface of delicate fruits like tomatoes and strawberries.

Jung’s research in the field of fluid dynamics has also explored capillary action that allows worms to cling together, and cats and dogs gravity-defying drinking mechanism.