For someone suffering from paralysis or limited mobility, visiting with other people is extremely difficult. A team of researchers at the Defitech Foundation Chair in Brain-Machine Interface (CNBI), headed by José del R. Millán, has however been working on a revolutionary brain-machine approach in order to restore a sense of independence to the disabled.

The idea is to remotely control a robot from home with one's thoughts. The research, involving numerous subjects located in different countries, produced excellent results in both human and technical terms. The conclusions are discussed in the June special edition ofProceedings of the IEEE, dedicated to brain-machine interfaces.

Nine disabled people and ten healthy people in Italy, Germany and Switzerland took part in the task of piloting a robot with their thoughts. For several weeks, each of the subjects put on an electrode-studded hat capable of analysing their brain signals. They then instructed the robot to move, transmitting their instructions in real time via internet from their home country.

From his hospital bed, a disabled patient is capable of controlling a telepresence robot and interacting with people he meets over Skype. 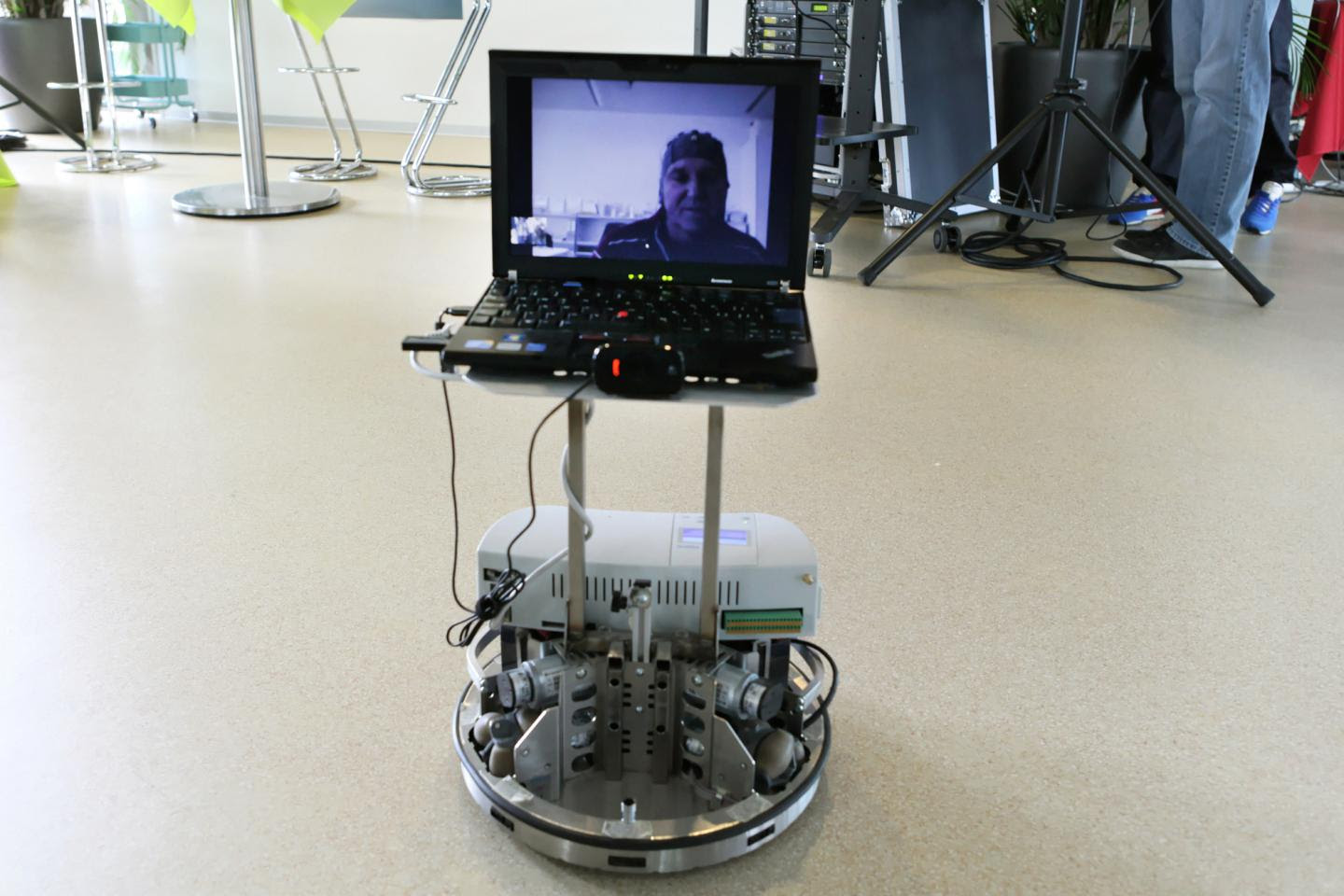 By virtue of its video camera, screen and wheels, the robot, located in a laboratory of Ecole polytechnique fédérale de Lausanne (EPFL, Switzerland), was able to film as it moved while displaying the face of the remote pilot via Skype. The person at the controls, as if moving in place of the robot, was able to interact with whoever the robot crossed paths with. "Each of the 9 subjects with disabilities managed to remotely control the robot with ease after less than 10 days of training," said Professor Millán.

Shared control between human and machine

The brain-machine interface developed by the researchers goes even further. The robot is able to avoid obstacles by itself, even when it is not told to. To avoid getting overly tired, the pilot can also take a break from giving indications. If it doesn't receive more indications, the robot will continue on the indicated path until it receives the order to stop. In this way, control over the robot is shared between the human and the computer, allowing the pilot to rest while navigating.

No difference between healthy and disabled subjects

In the end, the tests revealed no difference in piloting ability between healthy and disabled subjects. In the second part of the tests, the disabled people with residual mobility were asked to pilot the robot with the movements they were still capable of doing, for example by simply pressing the side of their head on buttons placed nearby. They piloted the robot just as if they were uniquely using their thoughts, further proof of the effectiveness of the system.

The positive results of this research bring to a close the European project called TOBI (Tools for Brain-Computer Interaction), which began in 2008. Will robots soon become a fact of daily life for people suffering from a disability? Too soon to say, according to Professor Millán. "For this to happen, insurance companies will have to help finance these technologies."