Researchers at University of California, Berkeley have taken inspiration from the cockroach to create a robot that can use its body shape to manoeuvre through a densely cluttered environment.

Fitted with the characteristic rounded shell of the discoid cockroach, the running robot can perform a roll manoeuvre to slip through gaps between grass-like vertical beam obstacles without the need for additional sensors or motors. 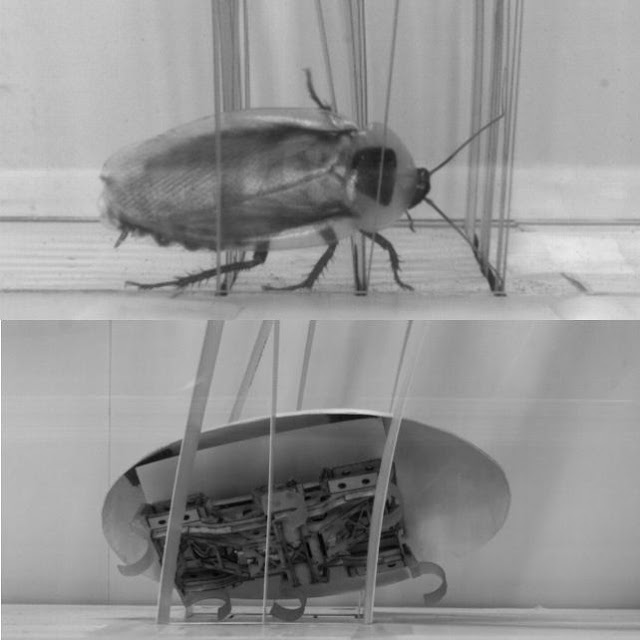 It is hoped the robot can inspire the design of future terrestrial robots to use in a wide variety of scenarios, from monitoring the environment to search and rescue operations.

The first results of the robot's performance have been presented today, 23 June 2015, in IOP Publishing's journal Bioinspiration & Biomimetics.

Whilst many terrestrial robots have been developed with a view to perform a wide range of tasks by avoiding obstacles, few have been specifically designed to traverse obstacles.

Lead author of the study Chen Li, from the University of California, Berkeley, said: "The majority of robotics studies have been solving the problem of obstacles by avoiding them, which largely depends on using sensors to map out the environment and algorithms that plan a path to go around obstacles.

A discoid cockroach rolls its body to the side and quickly maneuvers through narrow gaps between densely cluttered, grass-like beam obstacles. With its unmodified cuboidal body, the VelociRoACH robot becomes stuck while trying to traverse beam obstacles, because it turns to the left or right as soon as its body contacts a beam. By adding a rounded, ellipsoidal, exoskeletal shell inspired from the cockroach, the robot rolls its body to the side and maneuvers through beam obstacles, without adding sensors or changing the open-loop control.
Courtesy of PolyPEDAL Lab, Biomimetic Millisystems Lab, and CiBER, UC Berkeley.

"However, when the terrain becomes densely cluttered, especially as gaps between obstacles become comparable or even smaller than robot size, this approach starts to run into problems as a clear path cannot be mapped."

In their study, the researchers used high-speed cameras to study the movement of discoid cockroaches through an artificial obstacle course containing grass-like vertical beams with small spacing. Living on the floor of tropical rainforests, this specific type of cockroach frequently encounters a wide variety of cluttered obstacles, such as blades of grass, shrubs, leaf litter, tree trunks, and fungi.

The cockroaches were fitted with three different artificial shells to see how their movement was affected by body shape when moving through the vertical beams. The shapes of the three shells were: an oval cone with a similar shape to the cockroaches' body; a flat oval; and a flat rectangle.

As their body became less rounded by wearing the three artificial shells, it became harder for the cockroaches to move through the obstacles, because they were less able to perform the fast and effective roll manoeuvre.

After examining the cockroaches, the researchers then tested a small, rectangular, six-legged robot and observed whether it was able to traverse a similar obstacle course.

The researchers found that with a rectangular body the robot could rarely traverse the grass-like beams, and frequently collided with the obstacles and became stuck between them.

When the robot was fitted with the cockroach-inspired rounded shell, it was much more likely to successfully move through the obstacle course using a similar roll manoeuvre to the cockroaches. This adaptive behaviour came about with no change to the robot programming, showing that the intelligent behaviour came from the shell.

"We showed that our robot can traverse grass-like beam obstacles at high probability, without adding any sensory feedback or changes in motor control, thanks to the thin, rounded shell that allows the robot body to roll to reduce terrain resistance." Li continued. "This is a terrestrial analogy of the streamlined shapes that reduce drag on birds, fish, airplanes and submarines as they move in fluids. We call this 'terradynamic' streamlining."

"There may be other shapes besides the thin, rounded one that are good for other purposes, such as climbing up and over obstacles of other types. Our next steps will be to study a diversity of terrain and animal shapes to discover more terradynamic shapes, and even morphing shapes. These new concepts will enable terrestrial robots to go through various cluttered environments with minimal sensors and simple controls."