To sort out the biological intricacies of Earth-like planets, astronomers have developed computer models that examine how ultraviolet radiation from other planets' nearby suns may affect those worlds, according to new research published June 10 in Astrophysical Journal.

This is an artist's impression of a young Earth. 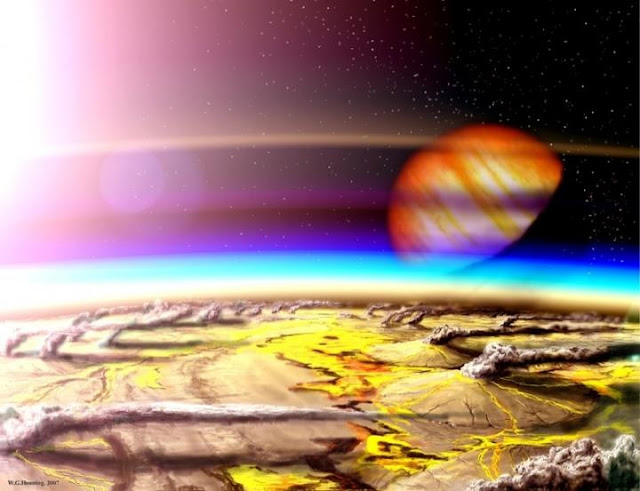 "Depending on the intensity, ultraviolet radiation can be both useful and harmful to the origin of life," says Lisa Kaltenegger, Cornell associate professor of astronomy and the director of Cornell's new Carl Sagan Institute: Pale Blue Dot and Beyond. "We are trying to ascertain how much radiation other young Earths would get and what that could mean for the possibility for life."

"We're going to see all kinds of planets in all kinds of stages in their own evolution, but we wanted to take four kinds of epochs from Earth history, as samples of what we might see," said Rugheimer. "With the next generation of missions, we expect to observe a wide diversity of extrasolar planets."

Borrowing from deep into Earth's history, Rugheimer and co-authors modeled the first epoch, a pre-biotic world with a carbon dioxide-dominated atmosphere, similar to early Earth 3.9 billion years ago. The second epoch - about 2 billion years ago - spawned the first whiff of oxygen, an active biosphere and the process of biosynthesis. Oxygen started to rise from the first cyanobacteria to the 1 percent concentration of current levels.

Multicellular life started about 800 million years ago, and the group modeled a third epoch, where oxygen rose to about 10 percent of today's levels. The fourth epoch corresponds to modern Earth, where the atmosphere features a carbon dioxide ratio of about 355 parts per million with current oxygen levels.

Rugheimer, who conducted the research while she was a doctoral student at Harvard University, explained that astrobiology draws researchers across disciplines and noted: "This work provides a link from the astrophysical conditions we expect to find on other planets to the origin-of-life experiments happening on here on Earth."