Alien Life: Nonphotosynthetic Pigments Could Be Biosignatures of Life on Other Worlds

To find life in the universe, it helps to know what it might look like. If there are organisms on other planets that do not rely wholly on photosynthesis -- as some on Earth do not -- how might those worlds appear from light-years away?

That’s among the questions University of Washington doctoral student Edward Schwieterman and astronomer Victoria Meadows of the UW-based, interdisciplinary Virtual Planetary Laboratory sought to answer in research published in May in the journal Astrobiology.

Laguna Colorada is a shallow salt lake in the southwest of Bolivia. One of several places on Earth whose colors are affected by nonphotosynthetic pigments. UW doctoral student Eddie Schwieterman has published research on how such nonphotosynthetic biosignatures might appear on exoplanets, or those outside our solar system. 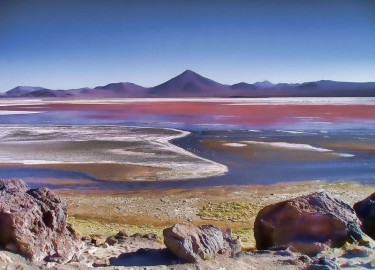 Using computer simulations, the researchers found that if organisms with nonphotosynthetic pigments -- those that process light for tasks other than energy production -- cover enough of a distant planet's surface, their spectral signal could be strong enough to be detected by powerful future telescopes now being designed. The knowledge could add a new perspective to the hunt for life beyond Earth.

Such organisms 'will produce reflectance, or brightness, signatures different than those of land vegetation like trees,' said lead author Schwieterman. 'This could push us to broaden our conception of what surface biosignatures might look like' on an exoplanet, or world beyond our solar system.

He said the research grew from a meeting with co-author Charles Cockell of the UK Centre for Astrobiology in 2012. Schwieterman sought a topic for a research rotation in the UW Astrobiology program in which students do work outside their main field of study.

'I was interested in doing biology in the lab and linking it to remotely detectable biosignatures, which are indications there is life on a planet based on observations that could be made from a space-based telescope or large ground-based telescope,' Schwieterman said.

There had already been literature about looking for something akin to Earth's vegetation 'red edge' as a possible biosignature on exoplanets, he said. The red edge -- caused by oxygen-producing organisms such as trees -- is the increase in brightness when you move from the visible wavelength range to the infrared, or light too red to see. It's why foliage looks bright in infrared photography and is often used to map vegetation cover by Earth-observing satellites.

Schwieterman and Cockell, a University of Edinburgh astrobiologist, decided to look further, and measure the reflectance of earthly organisms with different kinds of pigments. They included those that do not rely on photosynthesis to see what biosignatures they produce and how those might differ from photosynthetic organisms -- or indeed from nonliving surface features like rocks and minerals.

Pigments that absorb light are helpful to earthly organisms in ways other than just producing energy. Some protect against the sun's radiation or have antioxidants to help the organism survive extreme environments such as salt concentrations, high temperatures or acidity. There are even photosynthetic pigments that do not produce oxygen at all.

Schwieterman and Meadows then plugged their results Virtual Planetary Laboratory spectral models -- which include the effects of the atmosphere and clouds -- to simulate hypothetical planets with surfaces covered to varying degrees with such organisms.

'With those models we could determine the potential detectability of those signatures,' he said.

Exoplanets are much too far away to observe in any detail; even near-future telescopes will deliver light from such distant targets condensed to a single pixel. So even a strong signal of nonphotosynthetic pigments would be seen at best only in the 'disk average,' or average planetary brightness in the electromagnetic spectrum, Schwieterman said.

'This broader perspective might allow us to pick up on something we might have missed or offer an additional piece of evidence, in conjunction with a gaseous biosignature like oxygen, for example, that a planet is inhabited,' Schwieterman said.

The UW-based planetary lab has a growing database of spectra and pigments of nonphotosynthetic organisms and more that is available to the public, and to which data from this project have been added.

Schwieterman said much work remains to catalogue the range of spectral features that life on Earth produces and also to quantify how much of a planetary surface could conceivably be covered with pigmented organisms of any type.

'We also need to think about what kinds of adaptations might exist on other worlds that don't exist on Earth -- and what that means for the interaction of those possible extraterrestrial organisms with their light environments.'


Contacts and sources:
Peter KelleyUniversity of Washington
on June 23, 2015