A new relative joins "Lucy" on the human family tree. An international team of scientists, led by Dr. Yohannes Haile-Selassie of The Cleveland Museum of Natural History, has discovered a 3.3 to 3.5 million-year-old new human ancestor species. Upper and lower jaw fossils recovered from the Woranso-Mille area of the Afar region of Ethiopia have been assigned to the new species Australopithecus deyiremeda. This hominin lived alongside the famous "Lucy's" species, Australopithecus afarensis. The species will be described in the May 28, 2015 issue of the international scientific journal Nature.

This is the holotype upper jaw of a new human ancestor species found on March 4, 2011. 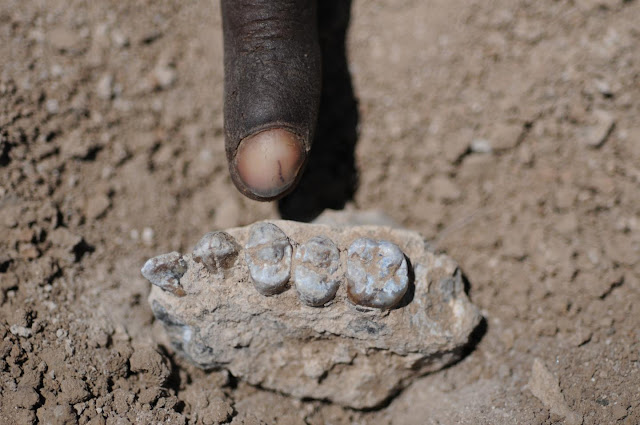 Lucy's species lived from 2.9 million years ago to 3.8 million years ago, overlapping in time with the new species Australopithecus deyiremeda. The new species is the most conclusive evidence for the contemporaneous presence of more than one closely related early human ancestor species prior to 3 million years ago. The species name "deyiremeda" (day-ihreme-dah) means "close relative" in the language spoken by the Afar people.

Australopithecus deyiremeda differs from Lucy's species in terms of the shape and size of its thick-enameled teeth and the robust architecture of its lower jaws. The anterior teeth are also relatively small indicating that it probably had a different diet.

"The new species is yet another confirmation that Lucy's species, Australopithecus afarensis, was not the only potential human ancestor species that roamed in what is now the Afar region of Ethiopia during the middle Pliocene," said lead author and Woranso-Mille project team leader Dr. Yohannes Haile-Selassie, curator of physical anthropology at The Cleveland Museum of Natural History. "Current fossil evidence from the Woranso-Mille study area clearly shows that there were at least two, if not three, early human species living at the same time and in close geographic proximity."

Dr. Yohannes Haile-Selassie of The Cleveland Museum of Natural History announced a new human ancestor species from Ethiopia. He is pictured holding a cast of the holotype upper jaw. 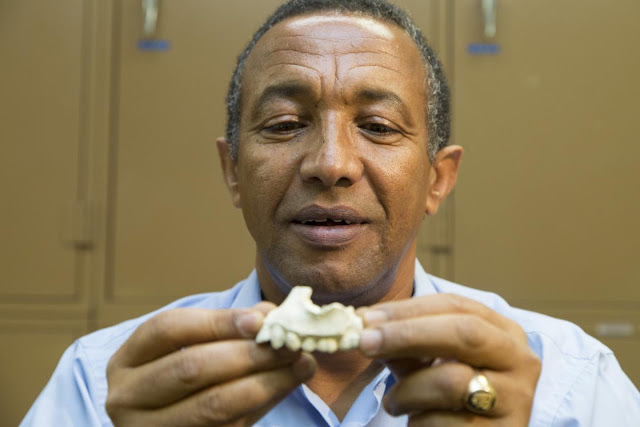 "This new species from Ethiopia takes the ongoing debate on early hominin diversity to another level," said Haile-Selassie. "Some of our colleagues are going to be skeptical about this new species, which is not unusual. However, I think it is time that we look into the earlier phases of our evolution with an open mind and carefully examine the currently available fossil evidence rather than immediately dismissing the fossils that do not fit our long-held hypotheses," said Haile-Selassie.

This photo shows the jaw. 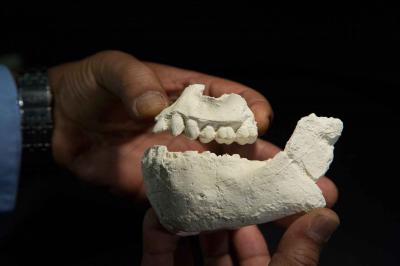 Scientists have long argued that there was only one pre-human species at any given time between 3 and 4 million years ago, subsequently giving rise to another new species through time. This was what the fossil record appeared to indicate until the end of the 20th century. However, the naming of Australopithecus bahrelghazali from Chad and Kenyanthropus platyops from Kenya, both from the same time period as Lucy's species, challenged this long-held idea. Although a number of researchers were skeptical about the validity of these species, the announcement by Haile-Selassie of the 3.4 million-year-old Burtele partial foot in 2012 cleared some of the skepticism on the likelihood of multiple early hominin species in the 3 to 4 million-year range. 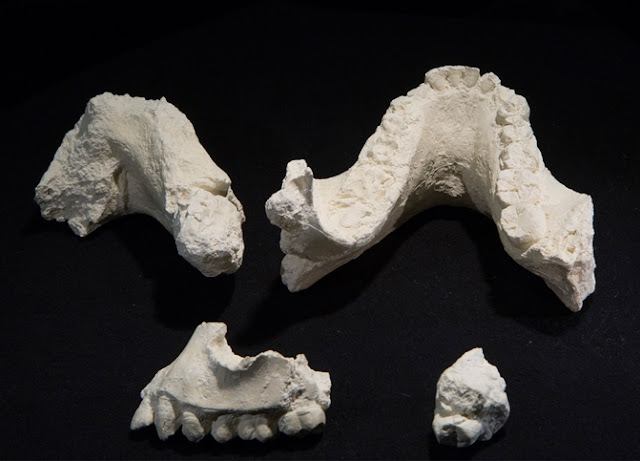 The Burtele partial fossil foot did not belong to a member of Lucy's species. However, despite the similarity in geological age and close geographic proximity, the researchers have not assigned the partial foot to the new species due to lack of clear association. Regardless, the new species Australopithecus deyiremeda incontrovertibly confirms that multiple species did indeed co-exist during this time period.

This discovery has important implications for our understanding of early hominin ecology. It also raises significant questions, such as how multiple early hominins living at the same time and geographic area might have used the shared landscape and available resources.

To view a photo gallery and video interview, visit www.cmnh.org/nature2015.

The holotype (type specimen) of Australopithecus deyiremeda is an upper jaw with teeth discovered on March 4, 2011, on top of a silty clay surface at one of the Burtele localities. The paratype lower jaws were also surface discoveries found on March 4 and 5, 2011, at the same locality as the holotype and another nearby locality called Waytaleyta. The holotype upper jaw was found in one piece (except for one of the teeth which was found nearby), whereas the mandible was recovered in two halves that were found about two meters apart from each other. The other mandible was found about 2 kilometers east of where the Burtele specimens were found.

Location of the Discovery:

The fossil specimens were found in the Woranso-Mille Paleontological Project study area located in the central Afar region of Ethiopia about 325 miles (520 kilometers) northeast of the capital Addis Ababa and 22 miles (35 kilometers) north of Hadar ("Lucy's" site). Burtele and Waytaleyta are local names for the areas where the holotype and paratypes were found and they are located in the Mille district, Zone 1 of the Afar Regional State.

Contacts and sources:
Glenda Bogar
Cleveland Museum of Natural History
on May 28, 2015