Supernovas just might be the maid service of the universe.

It seems these explosions that mark the end of a star's life work hand-in-hand with supermassive black holes to sweep out gas and shut down galaxies' star-forming factories.

Jets erupting from a supermassive black hole, such as the one in Centaurus A (shown in this color composite image), might clear the way for supernovas to sweep out gas and stop star formation. 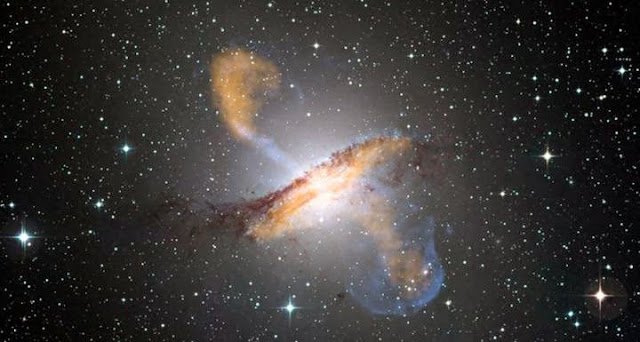 Recent research, led by Michigan State University astronomers, finds that the black holes located at the cores of galaxies launch fountains of charged particles, which can stir up gas throughout the galaxy and temporarily interrupt star formation.

But unless something intervenes, the gas will eventually cool and start forming stars again.

One mega-outburst from the black hole, though, could heat the gas surrounding the galaxy enough to let supernovas take over and mop up the mess. A celestial cleaning partnership might help astronomers understand why some massive galaxies stopped forming stars billions of years ago.

"Our previous research had shown that black-hole outbursts can limit star formation in massive galaxies, but they can't completely shut it off," said team leader Mark Voit, MSU professor of physics and astronomy in the College of Natural Science. "Something else needs to keep sweeping out the gas that dying stars continually dump into a galaxy, and supernova sweeping appears to work perfectly for that."

This research was recently published in Science News and Astrophysical Journal Letters.

Contacts and sources:
Tom OswaldMichigan State University
on May 26, 2015