Skin is remarkably resistant to tearing and a team of researchers from the University of California, San Diego and the Lawrence Berkeley National Laboratory now have shown why.

Using powerful X-ray beams and electron microscopy, researchers made the first direct observations of the micro-scale mechanisms that allow skin to resist tearing. They identified four specific mechanisms in collagen, the main structural protein in skin tissue, that act together to diminish the effects of stress: rotation, straightening, stretching, and sliding. Researchers say they hope to replicate these mechanisms in synthetic materials to provide increased strength and in better resistance to tearing.

Collagen fibrils at unnotched side are relaxed. 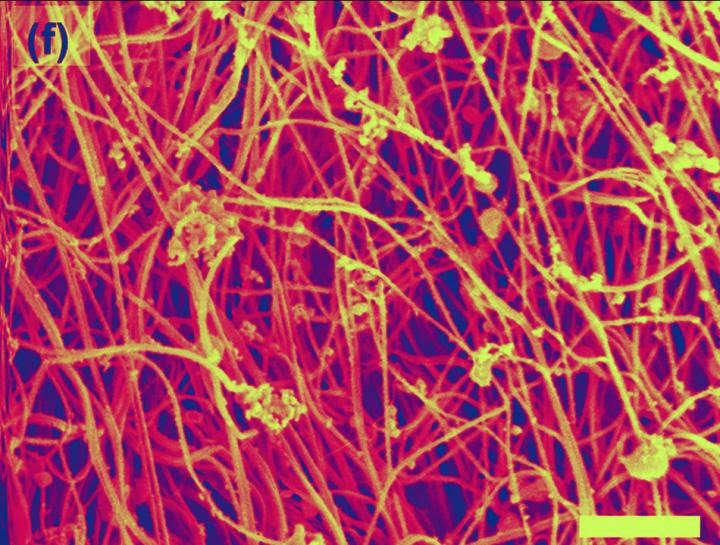 "Collagen fibrils and fibers rotate, straighten, stretch and slide to carry load and reduce the stresses at the tip of any tear in the skin," said Berkeley Lab's Robert Ritchie, co-leader of this study with Marc Meyers, a professor of mechanical engineering at the UC San Diego Jacobs School of Engineering. "The movement of the collagen acts to effectively diminish stress concentrations associated with any hole, notch or tear."

"The mechanistic understanding we've identified in skin could be applied to the improvement of artificial skin, or to the development of thin film polymers for applications such as flexible electronics," Ritchie said.


Collagen fibril at notched side of the skin are delaminated and align closely to the direction of the tension caused by tearing.

Ritchie and Meyers published their results in the March 31 issue of Nature Communication. The other authors of the study are Wen Yang, Vincent Sherman, Bernd Gludovatz, Eric Schaible and Polite Stewart.

Skin consists of three layers -- the epidermis, dermis and endodermis. Mechanical properties are largely determined in the dermis, which is the thickest layer and is made up primarily of collagen and elastin proteins. "Collagen is by far the most important protein in the skin structure because it controls its mechanical response," said Yang, who mechanically tested skin and other natural materials for the study.

The research team began their work by establishing that a tear in the skin does not propagate or induce fracture, unlike other materials such as bone or tooth dentin, which are composed of mineralized collagen fibrils. Instead, the tearing or notching of skin triggers structural changes in the collagen fibrils of the dermis layer to reduce stress concentration. Initially, these collagen fibrils are curvy and highly disordered. However, in response to a tear, they rearrange themselves in the direction in which the skin is being stressed, and prevent failure through rotation, straightening, stretching, sliding and delamination prior to fracturing.

This is a SEM image of arrangement of curved collagen fibers. 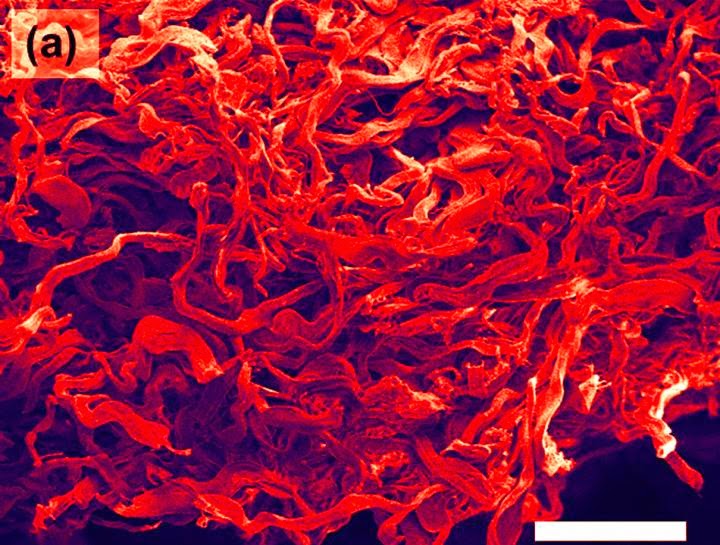 "The rotation mechanisms recruit collagen fibrils into alignment with the tension axis at which they are maximally strong or can accommodate shape change," says Meyers. "Straightening and stretching allow the uptake of strain without much stress increase, and sliding allows more energy dissipation during inelastic deformation. This reorganization of the fibrils is responsible for blunting the stress at the tips of tears and notches."

This new study of the skin is part of an on-going collaboration between Ritchie and Meyers to examine how nature achieves specific properties through architecture and structure. After its online publication, the study immediately captured the attention of the public and researchers alike. Five days after it was released, it had been picked up by a number of news outlets.