The Underground Get Stronger When A Missile Or Meteor Hits

When a missile or meteor strikes the earth, the havoc above ground is obvious, but the details of what happens below ground are harder to see.

Duke University physicists have developed techniques that enable them to simulate high-speed impacts in artificial soil and sand in the lab, and then watch what happens underground close-up, in super slow motion.

These are frames from a high-speed video of a metal object slamming into a bed of artificial soil, sand or rock. Shown at slow (top), medium (middle) and high impact speeds (bottom), the changing impact forces illuminated in each frame help explain why soil and sand get stronger when they are struck harder. 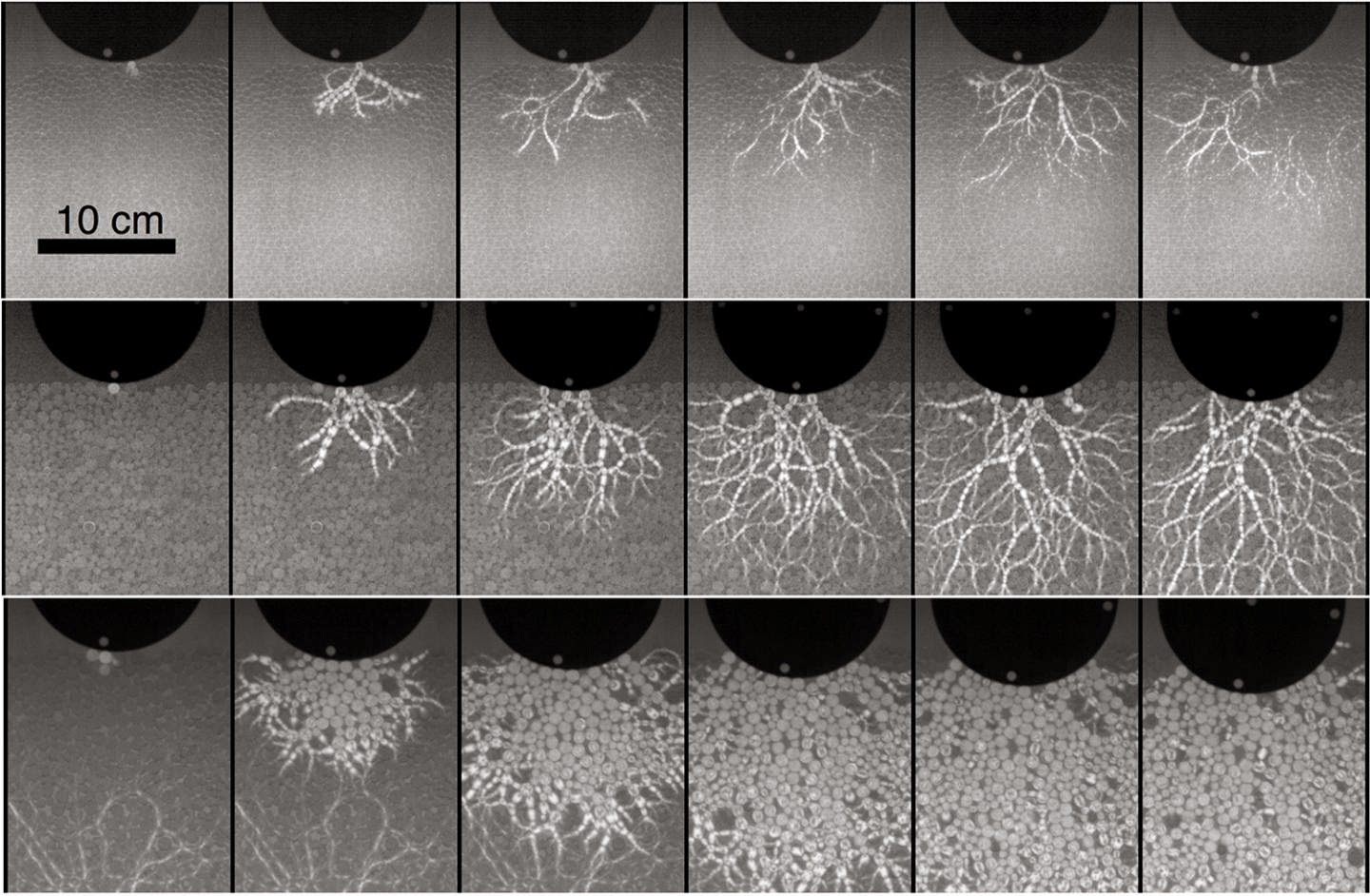 In a study scheduled to appear this week in the journal Physical Review Letters, they report that materials like soil and sand actually get stronger when they are struck harder.

The findings help explain why attempts to make ground-penetrating missiles go deeper by simply shooting them harder and faster have had limited success, the researchers say. Projectiles actually experience more resistance and stop sooner as their strike speed increases.

Funded by the Defense Threat Reduction Agency, the research may ultimately lead to better control of earth-penetrating missiles designed to destroy deeply buried targets such as enemy bunkers or stockpiles of underground weapons.

To simulate a missile or meteor slamming into soil or sand, the researchers dropped a metal projectile with a rounded tip from a seven-foot-high ceiling into a pit of beads.

During collision, the kinetic energy of the projectile is transferred to the beads and dissipates as they butt into each other below the surface, absorbing the force of the collision.

To visualize these forces as they move away from the point of impact, the researchers used beads made of a clear plastic that transmits light differently when compressed. When viewed through polarizing filters like those used in sunglasses, the areas of greatest stress show up as branching chains of light called "force chains" that travel from one bead to the next during impact, much like lightning bolts snaking their way across the sky.

The metal projectile fell into the beads at a speed of six meters per second, or nearly 15 miles per hour. But by using beads of varying hardness, the researchers were able to generate pulses that surged through the beads at speeds ranging from 67 to 670 miles per hour.

Each impact was too fast to see with the naked eye, so they recorded it with a high-speed video camera that shoots up to 40,000 frames per second. When they played it back in slow motion, they found that the branching network of force chains buried in the beads varied widely over different strike speeds.

At low speeds, a sparse network of beads carries the brunt of the force, said study co-author Robert Behringer, a professor of physics at Duke.

But at higher speeds, the force chains grow more extensive, which causes the impact energy to move away from the point of impact much faster than predicted by previous models.

New contacts form between the beads at high speeds as they are pressed together, and that strengthens the material.

"Imagine you're trying to push your way through a crowded room," said study co-author Abram Clark, currently a postdoctoral researcher in mechanical engineering at Yale University. "If you try to run and push your way through the room faster than the people can rearrange to get out of the way, you're going to end up applying a lot of pressure and ramming into a lot of angry people."

Other authors of this study include Alec Petersen of the University of Minnesota and Lou Kondic of the New Jersey Institute of Technology.