The Thunder Lizard Is Back: Brontosaurus

Although well known as one of the most iconic dinosaurs, Brontosaurus (the 'thunder lizard') has long been considered misclassified. Since 1903, the scientific community has believed that the genus Brontosaurus was in fact the Apatosaurus. Now, an exhaustive new study by palaeontologists from Portugal and the UK provides conclusive evidence that Brontosaurus is distinct from Apatosaurus and as such can now be reinstated as its own unique genus.

Historic life restoration of Brontosaurus as semi-acquatic animal, and with Diplodocus in the background on land 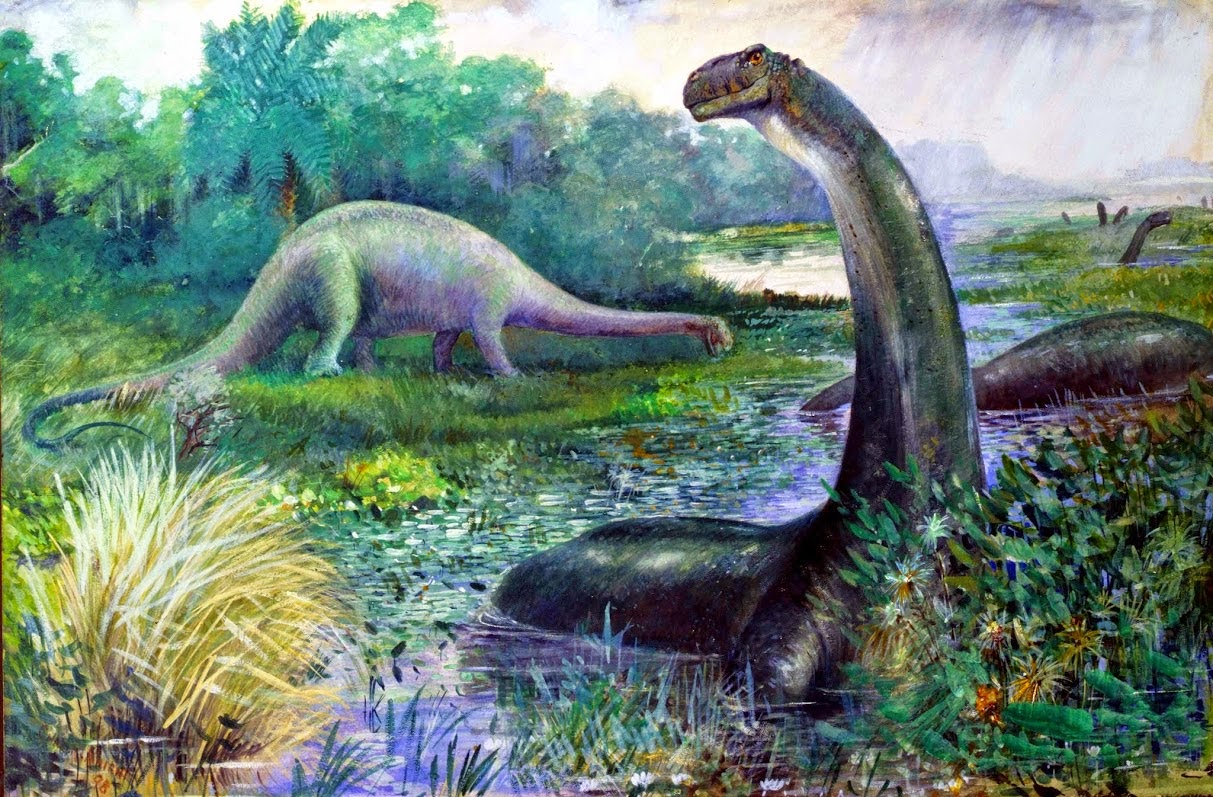 Brontosaurus is one of the most charismatic dinosaurs of all time, inspiring generations of children thanks to its size and evocative name. However, as every armchair palaeontologist knows, Brontosaurus was in fact a misnomer, and it should be correctly referred to as Apatosaurus. At least, this is what scientists have believed since 1903, when it was decided that the differences between Brontosaurus excelsus and Apatosaurus were so minor that it was better to put them both in the same genus. Because Apatosaurus was named first, it was the one that was used under the rules of scientific naming. 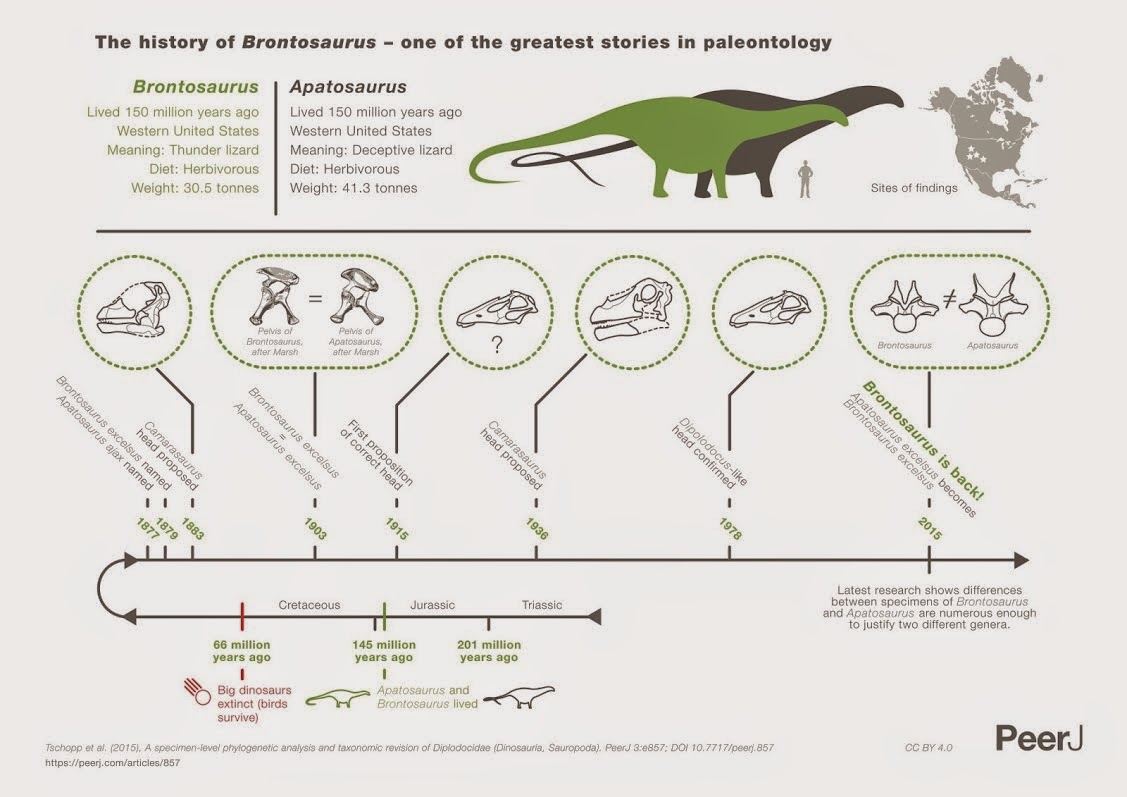 The history of Brontosaurus is complex, and one of the most intriguing stories in science. In the 1870s, the Western United States formed the location for dozens of new finds of fossil species, most notably of dinosaurs. Field crews excavated numerous new skeletons mostly for the famous and influential palaeontologists Marsh and Cope. During that period, Marsh's team discovered two enormous, partial skeletons of long-necked dinosaurs and shipped them to the Yale Peabody Museum in New Haven, where Marsh worked.
Marsh described the first of these skeletons as Apatosaurus ajax, the "deceptive lizard" after the Greek hero Ajax. Two years later, he named the second skeleton Brontosaurus excelsus, the "noble thunder lizard". However, because neither of the skeletons were found with a skull, Marsh reconstructed one for Brontosaurus excelsus. Brontosaurus was a massive animal, likeApatosaurus, and like another long-necked dinosaur from the Western United States,Camarasaurus. Because of this similarity, it seemed logical at the time that Brontosaurus had a similarly stout, box-like skull to that of Camarasaurus. However, this reconstruction was later found to be wrong.

But now, in a new study published in the peer reviewed open access journal PeerJ and consisting of almost 300 pages of evidence, a team of scientists from Portugal and the UK have shown that Brontosaurus was distinct from Apatosaurus after all - the thunder lizard is back!

How can a single study overthrow more than a century of research? "Our research would not have been possible at this level of detail 15 or more years ago", explains Emanuel Tschopp, a Swiss national who led the study during his PhD at Universidade Nova de Lisboa in Portugal, "in fact, until very recently, the claim that Brontosaurus was the same as Apatosaurus was completely reasonable, based on the knowledge we had." It is only with numerous new findings of dinosaurs similar to Apatosaurus and Brontosaurus in recent years that it has become possible to undertake a detailed reinvestigation of how different they actually were.

In science, the distinction between species and genera is without clear rules. Does this mean that the decision to resurrect Brontosaurus is just a matter of personal preference? "Not at all", explains Tschopp, "we tried to be as objective as possible whenever making a decision which would differentiate between species and genus". The researchers applied statistical approaches to calculate the differences between other species and genera of diplodocid dinosaurs, and were surprised by the result. "The differences we found between Brontosaurusand Apatosaurus were at least as numerous as the ones between other closely related genera, and much more than what you normally find between species," explained Roger Benson, a co-author from the University of Oxford.

Therefore, Tschopp and colleagues have concluded that it is now possible to resurrectBrontosaurus as a genus distinct from Apatosaurus. "It's the classic example of how science works", said Professor Mateus, a collaborator on the research. "Especially when hypotheses are based on fragmentary fossils, it is possible for new finds to overthrow years of research."

Science is a process, always moving towards a clearer picture of the world around us. Sometimes this also means that we have to step backwards a bit before we continue to advance. That's what keeps the curiosity going. Hence, it is fitting that the Brontosaurus which sparked the curiosity of millions of people worldwide has now returned to do so again.