The Moon's DNA Analyzed To Reveal Its Origin

Within the first 150 million years after our solar system formed, a giant body roughly the size of Mars struck and merged with Earth, blasting a huge cloud of rock and debris into space. This cloud would eventually coalesce and form the moon.


For almost 30 years, planetary scientists have been quite happy with this explanation--with one major exception. Although this scenario makes sense when you look at the size of the moon and the physics of its orbit around Earth, things start to break down a little when you compare their isotopic compositions--the geological equivalent of a DNA "fingerprint." Specifically, Earth and the moon are too much alike.

This artist's rendering shows the collision of two planetary bodies. A collision like this is believed to have formed the moon within the first 150 million years after our solar system formed. 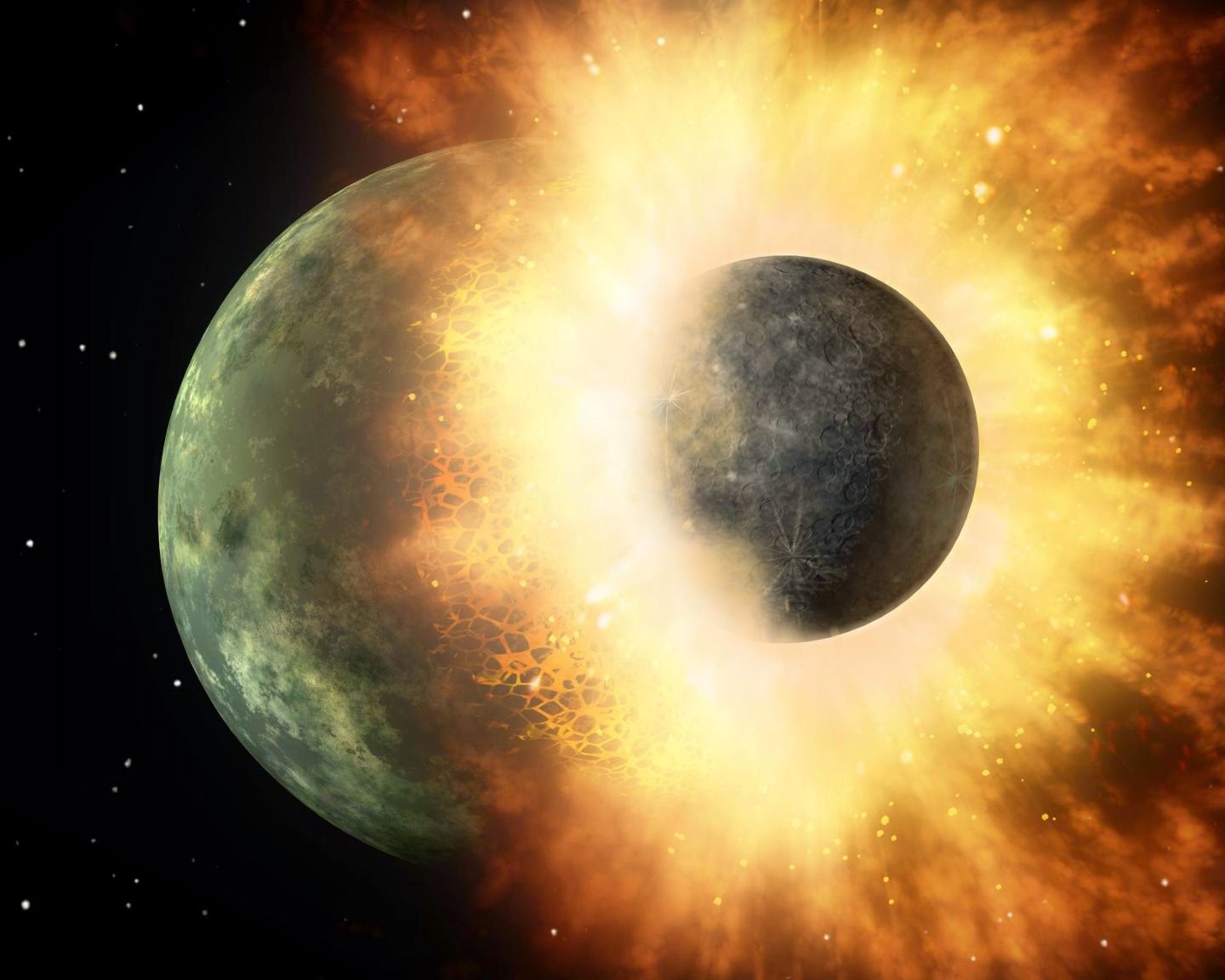 The expectation has long been that the moon should carry the isotopic "fingerprint" of the foreign body, which scientists have named Theia. Because Theia came from elsewhere in the solar system, it probably had a much different isotopic fingerprint than early Earth.

Now, a team of scientists at the University of Maryland has generated a new isotopic fingerprint of the moon that could provide the missing piece of the puzzle. By zeroing in on an isotope of Tungsten present in both the moon and Earth, the UMD team is the first to reconcile the accepted model of the moon's formation with the unexpectedly similar isotopic fingerprints of both bodies. The results suggest that the impact of Theia into early Earth was so violent, the resulting debris cloud mixed thoroughly before settling down and forming the moon. The findings appear in the April 8, 2015 advance online edition of the journal Nature.

"The problem is that Earth and the moon are very similar with respect to their isotopic fingerprints, suggesting that they are both ultimately formed from the same material that gathered early in the solar system's history," said Richard Walker, a professor of geology at UMD and co-author of the study. "This is surprising, because the Mars-sized body that created the moon is expected to have been very different. So the conundrum is that Earth and the moon shouldn't be as similar as they are."

Several different theories have emerged over the years to explain the similar fingerprints of Earth and the moon. Perhaps the impact created a huge cloud of debris that mixed thoroughly with the Earth and then later condensed to form the moon. Or Theia could have, coincidentally, been isotopically similar to young Earth. A third possibility is that the moon formed from Earthen materials, rather than from Theia, although this would have been a very unusual type of impact.

To tease out an explanation, Walker and his team looked to another well-documented phenomenon in the early history of the solar system. Evidence suggests that both Earth and the moon gathered additional material after the main impact, and that Earth collected more of this debris and dust. This new material contained a lot of Tungsten, but relatively little of this was of a lighter isotope known as Tungsten-182. Taking these two observations together, one would expect that Earth would have less Tungsten-182 than the moon.

Sure enough, when comparing rocks from the moon and Earth, Walker and his team found that the moon has a slightly higher proportion of Tungsten-182. The key, however, is how much.

This finding supports the idea that the mass of material created by the impact, which later formed the moon, must have mixed together thoroughly before the moon coalesced and cooled. This would explain both the overall similarities in isotopic fingerprints and the slight differences in Tungsten-182.

It also largely rules out the idea that the Mars-sized body was of similar composition, or that the moon formed from material contained in the pre-impact Earth. In both cases, it would be highly unlikely to see such a perfect correlation between Tungsten-182 and the amounts of material gathered by the moon and Earth post-impact.

"This result brings us one step closer to understanding the close familial relationship between Earth and the moon," Walker said. "We still need to work out the details, but it's clear that our early solar system was a very violent place."


Contacts and sources:
University of Maryland
on April 09, 2015