The Forces That Move Stars in Galaxies

Cosmic accidents are frequent occurrences in space: two or more disk galaxies collide and form elliptical systems. These contain regions in which the stars orbit the centre in precisely the opposite direction to what happens in the rest of the galaxy. Previous attempts to explain this assumed the colliding galaxies had a special relative orientation (“retrograde”). Athanasia Tsatsi, a doctoral student at the Max Planck Institute for Astronomy in Heidelberg, has now found a further possibility: the mass loss of the galaxies involved acts as a kind of huge rocket engine.

Galaxies about to collide: Snapshots from the simulation in which Athanasia Tsatsi was able to prove the effect of the galactic rocket engine. Left: galaxies before the merger; right: the result afterwards. 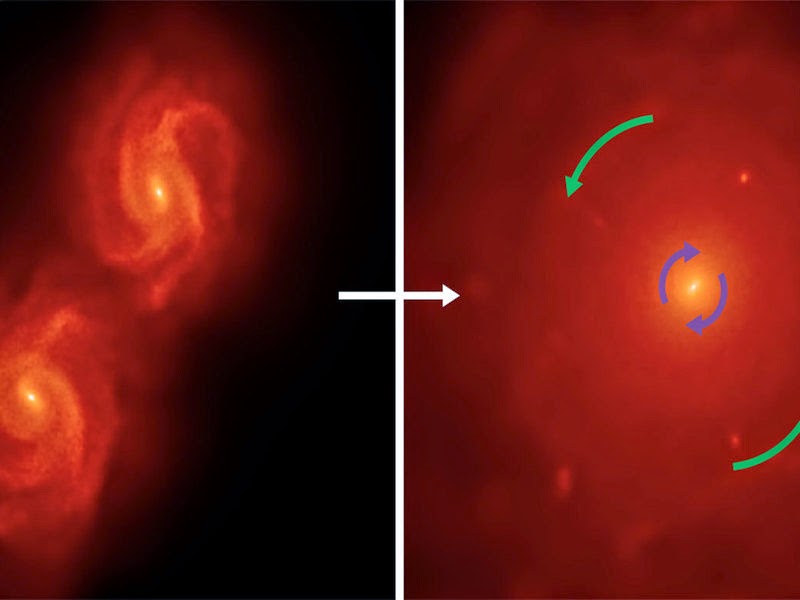 Elliptical galaxies form when at least two disk galaxies (our Milky Way is one such galaxy) collide with each other and coalesce. Unusual things may happen in such systems: while the stars in the outer regions all rotate in one direction, the orbital direction shared by the stars in the core region may be a completely different one.

Under these conditions, it is plausible that the stable central region becomes the heart of the new elliptical galaxy after the merger, and that the stars in it continue to orbit in precisely the same direction as before. The surrounding stars will move in the opposite direction, however – continuing in the orbital direction in which the predecessor galaxies orbited each other before the merger.

This model appears to work well, but predicts a lower number of counter-rotating cores than are actually observed.

This was the point of departure when Athanasia Tsatsi began her doctoral research at the Max Planck Institute for Astronomy in Heidelberg and evaluated computer simulations of galactic collisions. Tsatsi’s aim was actually to find out what the evolving elliptical galaxies would look like through different types of astronomical observation instruments.

Instead, the young researcher made an unexpected discovery when looking through such a “virtual telescope”: Although the galaxy that formed in the simulated merger had a counter-rotating core, the predecessor galaxies by no means had the special orientation, which ought to be the condition for the formation of the retrograde motion according to the conventional attempt at an explanation.

The result of the simulated merger did match what was already known from observations, however. At 130 billion solar masses, the resulting elliptical galaxy was one of the more massive representatives of its class; it is precisely in such high-mass elliptical galaxies that counter-rotating cores are particularly common and long-lived: they could still be detected in computer programs even two billion years or so after the merger.

Athanasia Tsatsi saw something in the simulation which all her predecessors had missed: as the cores of the two galaxies orbit each other, there comes a moment in time when the direction reverses. This reversal takes place just as their reciprocal gravitational effect is causing the two systems to lose significant amounts of mass – and especially stars from their outer regions.

What happens in such a galaxy is closely related to the special case of a problem which the Russian mathematician Ivan Vsevolodovich Meshchersky (1859 to 1935) investigated: point particles whose masses change over time and move under the reciprocal effect of their gravitational force. The change in mass means additional forces, also known as Meshchersky forces, come into play here.

The best-known example of such forces occurs with rocket propulsion: the rocket ejects hot gases from its nozzle; the force thereby exerted on the rocket is in the opposite direction and the rocket accelerates.

This explains why counter-rotating cores can form even with galactic mergers with the same direction of rotation (“prograde merger”): The mass loss of the two galaxies has the same effect as a gigantic rocket engine and can therefore be powerful enough to reverse the orbital direction of the stars, which ultimately end up in the central region of the newly formed galaxy. Tsatsi therefore calls this way of forming counter-rotating cores the Meshchersky mechanism.

Although Athanasia Tsatsi’s discovery initially relates only to one individual case, it is sufficient to prove that central regions rotating in opposite directions really can form in this way. Next, the astronomers must find out how widespread formation processes of this type are – by investigating galactic mergers with a wide range of initial conditions.

If these systematic tests show that the Meshchersky mechanism for the formation of counter-rotating cores occurs frequently enough, this could explain the observed frequency of the phenomenon – theory and practice would then be in harmony.