The fireball was registered on April 19, 2014, and now, after investigating its orbit, has been related to a potentially dangerous asteroid of about 400 meters in diameter

An international team led by the Spanish National Research Council (CSIC) has determined the orbit of Annama, a new characterized meteorite from a fireball occurred on April 19th 2014 at the Kola Peninsula (Russia). Researchers highlight the importance of this finding because only the orbit of another 22 meteorites is known so far.

This is a picture of the fireball at the time of entry to Earth taken at the Kola Peninsula (Russia). 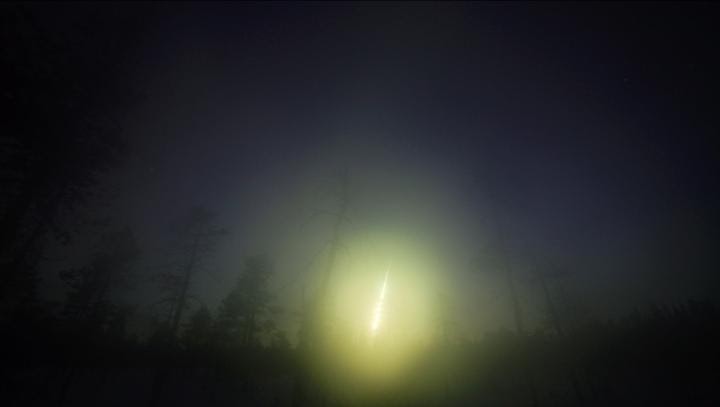 The characterization of Annama indicates that this is an ordinary H5 chondrite, a group of meteorites with high strength that constitutes 31% of meteorite falls. Researchers have also searched for the existence of some asteroid, among all known, that may have been fragmented and resulted in the meteorite. According to the paper published in Monthly Notices of the Royal Astronomical Society journal, the orbital evolution of Annama shows some similarity to the 2014 UR116, a potentially dangerous asteroid (i.e. an object that might collide the Earth) of about 400 meters in diameter that was discovered last year.

The reconstruction of the orbit

CSIC researchers compared the orbit of Annama with the evolution of a dozen orbits of near-Earth asteroids, reconstructing how their orbits evolved in the solar system over the past 10,000 years. Through this method, they explain, the degree of orbital similarity is determined and, in the most favourable cases, it can be established if both objects have a common origin.

Members of several research centres from Finland and Russia reconstructed the trajectory of the fireball and calculated the location of the fall using the data from three stations of the Finnish Fireball Network and the filming of a security camera from the Kola Peninsula. One month later, meteor rocks were recovered in this peninsula.

Meanwhile, Josep Maria Trigo (CSIC researcher at the Institute of Space Sciences, a CSIC centre associated with the Institute of Space Studies of Catalonia-IEEC) and his team determined its orbit and reconstructed the orbital evolution of Annama in the Solar System in order to compare it with a dozen asteroids with which, a priori, showed orbital similarity at the present time. Most of them are similar by chance, so an orbital integration in the past of the objects is required to decipher if the dynamic link is possible.

The analysis of the orbital evolution of the meteorite has showed, according to researchers, a "disturbing similarity" with the evolution of 2014 UR116 which, given its size and minimum distance of intersection with the orbit of the Earth, has been classified as a potentially dangerous asteroid. Currently, 1,573 asteroids of this type are known so researchers are investigating to what extent they can pose a danger.

Trigo states: "While it is true that many of these dangerous projectiles come from the main belt of asteroids after being gravitationally scattered towards the Earth by the so-called planetary resonances, in 2007 we proposed other physical mechanisms that enable these rocks to be detached from asteroids or comets as they undergo close approaches to our planet". He also adds: "The tidal effect on an asteroid, which rapidly rotates under the gravitational field of a planet, can fragment these objects or release large rocks from its surface, which could then become such dangerous projectiles at a local scale as the one fell in Cheliábinsk (Russia) on February 15th 2013".

Manuel Moreno-Ibáñez, CSIC researcher that participated in the study, explains: "The data we have obtained provided new clues about the origin of the rocks with a few meters in diameter that produce meteorite falls. So far, we only know the orbits of other 22 meteorites, and not always with the sought accuracy". Trigo adds: "In addition, Annama is a fascinating meteorite because it reveals the processes taken place during the formation of the Solar System, as well as more details about the thermal processing suffered by the asteroid it comes from".