As two galaxies enter the final stages of merging, scientists have theorized that the galaxies' supermassive black holes will form a "binary," or two black holes in such close orbit they are gravitationally bound to one another. In a new study, astronomers at the University of Maryland present direct evidence of a pulsing quasar, which may substantiate the existence of black hole binaries.

Two black holes entwined in a gravitational tango in an earlier artist's conception of black holes. 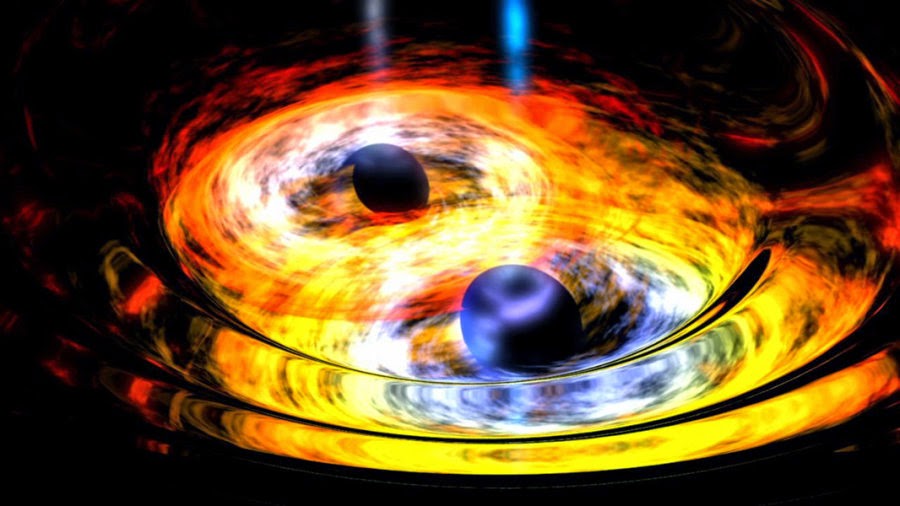 "We believe we have observed two supermassive black holes in closer proximity than ever before," said Suvi Gezari, assistant professor of astronomy at the University of Maryland and a co-author of the study. "This pair of black holes may be so close together that they are emitting gravitational waves, which were predicted by Einstein's theory of general relativity."

The study was published online April 14, 2015, in the Astrophysical Journal Letters. The discovery could shed light on how often black holes get close enough to form a gravitationally bound binary and eventually merge together.

Black holes typically gobble up matter, which accelerates and heats up, emitting electromagnetic energy and creating some of the most luminous beacons in the sky called quasars. When two black holes orbit as a binary, they absorb matter cyclically, leading theorists to predict that the binary's quasar would respond by periodically brightening and dimming.

The researchers conducted a systematic search for so-called variable quasars using the Panoramic Survey Telescope and Rapid Response System (Pan-STARRS1) Medium Deep Survey. This Haleakala, Hawaii-based telescope imaged the same patch of sky once every three days and collected hundreds of data points for each object over four years.

In that data, the astronomers found quasar PSO J334.2028+01.4075, which has a very large black hole of almost 10 billion solar masses and emits a periodic optical signal that repeats every 542 days. The quasar's signal was unusual because the light curves of most quasars are arrhythmic. To verify their finding, the research team performed rigorous calculations and simulations and examined additional data, including photometric data from the Catalina Real-Time Transient Survey and spectroscopic data from the FIRST Bright Quasar Survey.

"The discovery of a compact binary candidate supermassive black hole system like PSO J334.2028+01.4075, which appears to be at such close orbital separation, adds to our limited knowledge of the end stages of the merger between supermassive black holes," said UMD astronomy graduate student Tingting Liu, the paper's first author.

The researchers plan to continue searching for new variable quasars. Beginning in 2023, their search could be aided by the Large Synoptic Survey Telescope, which is expected to survey a much larger area and could potentially pinpoint the locations of thousands of these merging supermassive black holes in the night sky.

"These telescopes allow us to watch a movie of how these systems evolve," said Liu. "What's really cool is that we may be able to watch the orbital separation of these supermassive black holes get smaller and smaller until they merge."

Contacts and sources:
Abby Robinson
University of Maryland
on April 20, 2015