Complex organic molecules such as formamide, from which sugars, amino acids and even nucleic acids essential for life can be made, already appear in the regions where stars similar to our Sun are born. Astrophysicists from Spain and other countries have detected this biomolecule in five protostellar clouds and propose that it forms on tiny dust grains.

Nebulosa NGC1333, one of the stellar formation regions where formamide has been detected. 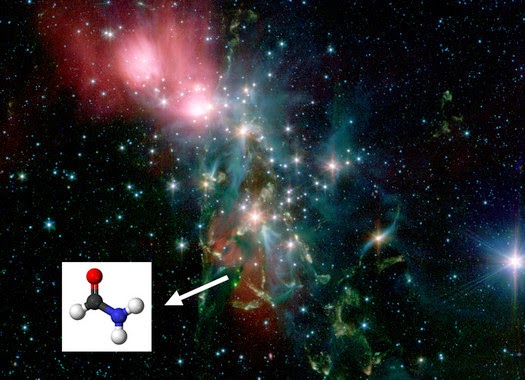 One of science's greatest challenges is learning about the origin of life and its precursor molecules. Formamide (NH2CHO) is an excellent candidate for helping to search for answers as it contains four essential elements (nitrogen, hydrogen, carbon and oxygen), and can synthesise amino acids, carbohydrates, nucleic acids and other key compounds for living organisms.

However, this molecule is also abundant in space, mainly in molecular clouds or the concentrations of gas and dust where stars are born. This has been confirmed by an international team of researchers, including Spanish investigators, after searching for formamide in ten star-forming regions.

"We have detected formamide in five protosuns, which proves that this molecule (in all probability also true for our Solar System) is relatively abundant in molecular clouds and is formed in the very early stages of evolution towards a star and its planets," explains Ana López Sepulcre, lead author of the study and researcher at the University of Tokyo (Japan), to SINC.

The other five objects where formamide has not been detected are less evolved and colder, "which indicates that a minimum temperature is needed for it to be detected in the gas," adds the scientist.

The study, which has just been published in the 'Monthly Notices of the Royal Astronomical Society', also offers clues on how formamide could be created in interstellar conditions. "We propose that it is formed on the surface of the dust grains.