Through a combination of data analysis and numerical modeling work, researchers have found a record of the ancient Moon-forming giant impact observable in stony meteorites. Their work will appear in the April 2015 issue of the Journal Science.

Artist's depiction of a collision between two planetary bodies. Such an impact between the Earth and a Mars-sized object likely formed the Moon. 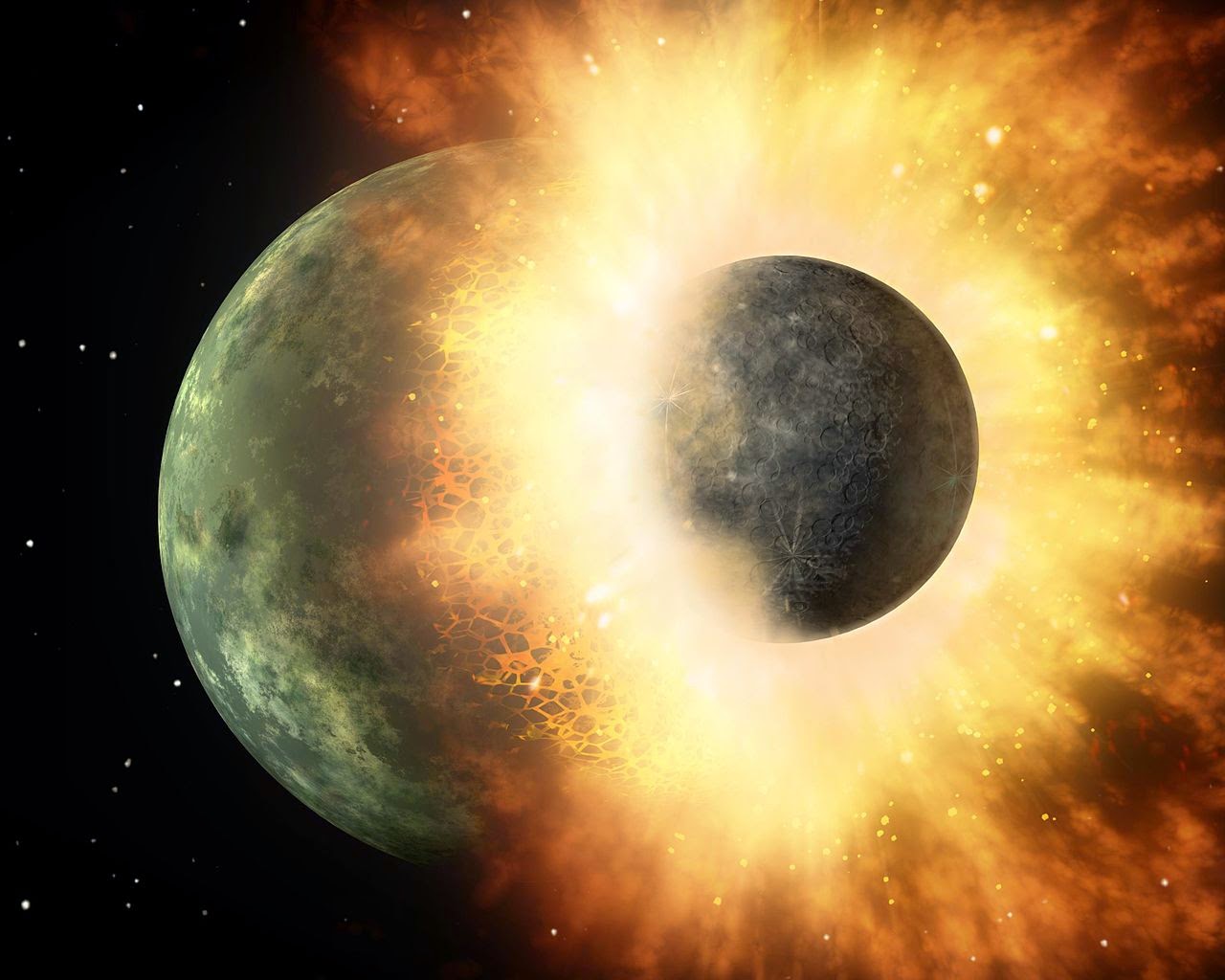 The work was done by NASA Solar System Exploration Research Virtual Institute (SSERVI) researchers led by Principal Investigator Bill Bottke of the Institute for the Science of Exploration Targets (ISET) team at the Southwest Research Institute and included Tim Swindle, director of the University of Arizona's Lunar and Planetary Laboratory.

One possible realization of the Moon-forming impact event is animated. Here it is assumed that a Mars-sized protoplanet, defined as having 13 percent of an Earth-mass, struck the proto-Earth at a 45-degree angle near the mutual escape velocity of both worlds. The "red" particles, comprising 0.3 percent of an Earth-mass, were found to escape the Earth-Moon system. Some of this debris may eventually go on to strike other solar system bodies like large main belt asteroids. "Yellow-green" particles go into the disk that makes the Moon. "Blue" particles were accreted by the proto-Earth. The details of this simulation can be found in Canup, R. (2004, Simulations of a late lunar-forming impact, Icarus 168, 433-456).
Credit: Robin Canup, Southwest Research Institute
The inner Solar System's biggest known collision was the Moon-forming giant impact between a large protoplanet and the proto-Earth. The timing of this giant impact, however, is uncertain, with the ages of the most ancient lunar samples returned by the Apollo astronauts still being debated. Numerical simulations of the giant impact indicate this event not only created a disk of debris near Earth that formed the Moon, but it also ejected huge amounts of debris completely out of the Earth-Moon system. The fate of this material, comprising as much as several percent of an Earth mass, has not been closely examined until recently. However, it is likely some of it blasted main belt asteroids, with a record plausibly left behind in their near-surface rocks. Collisions on these asteroids in more recent times delivered these shocked remnants to Earth, which scientists have now used to date the age of the Moon.

The research indicates numerous kilometer-sized fragments from the giant impact struck main belt asteroids at much higher velocities than typical main belt collisions, heating the surface and leaving behind a permanent record of the impact event. Evidence that the giant impact produced a large number of kilometer-sized fragments can be inferred from laboratory and numerical impact experiments, the ancient lunar impact record itself, and the numbers and sizes of fragments produced by major main belt asteroid collisions.

Once the team concluded that pieces of the Moon-forming impact hit main belt asteroids and left a record of shock heating events in some meteorites, they set out to deduce both the timing and the relative magnitude of the bombardment. By modeling the evolution of giant impact debris over time and fitting the results to ancient impact heat signatures in stony meteorites, the team was able to infer the Moon formed about 4.47 billion years ago, in agreement with many previous estimates. The most ancient Solar System materials found in meteorites are about one hundred million years older than this age.

Insights into the last stages of planet formation in the inner solar system can be gleaned from these impact signatures. For example, the team is exploring how they can be used to place new constraints on how many asteroid-like bodies still existed in the inner Solar System in the aftermath of planet formation. They can also help researchers deduce the earliest bombardment history of ancient bodies like Vesta, one of the targets of NASA's Dawn mission and a main belt asteroid whose fragments were delivered to Earth in the form of meteorites. It is even possible that tiny remnants of the Moon-forming impactor or proto-Earth might still be found within meteorites that show signs of shock heating by giant impact debris. This would allow scientists to explore for the first time the unknown primordial nature of our homeworld.

Co-author Swindle, who specializes in finding the times when meteorites or lunar samples were involved in large collisions, said: "Bill Bottke had the idea of looking at the asteroid belt to see what effect a Moon-forming giant impact would have, and realized that you would expect a lot of collisions in the period shortly after that.

"Here at LPL, we had been determining ages of impact events that affected meteorites, and when we got together, we found that our data matched his predictions," he added. "It's a great example of taking advantage of groups that work in two different specialties - orbital dynamics and chronology - and combining their expertise."

Intriguingly, some debris may have also returned to hit the Earth and Moon after remaining in solar orbit over timescales ranging from tens of thousands of years to 400 million years.

"The importance of giant impact ejecta returning to strike the Moon could also play an intriguing role in the earliest phase of lunar bombardment," said Bottke, who is an alumnus of the University of Arizona's Lunar and Planetary Laboratory. "This research is helping to refine our time scales for 'what happened when' on other worlds in the Solar System."

Yvonne Pendleton, Director of the NASA SSERVI Institute, notes: "This is an excellent example of the power of multidisciplinary science. By linking studies of the Moon, of main belt asteroids, and of meteorites that fall to Earth, we gain a better understanding of the earliest history of our Solar System."


Contacts and sources:
Daniel Stolte
University of Arizona
on April 16, 2015