An international team of scientists have put forward a blueprint for a purely space-based system to solve the growing problem of space debris. The proposal, published in Acta Astronautica, combines a super-wide field-of-view telescope, developed by RIKEN's EUSO team, which will be used to detect objects, and a recently developed high-efficiency laser system, the CAN laser that was presented in Nature Photonics in 2013, that will be used to track space debris and remove it from orbit.

Space debris seen from outside geosynchronous orbit (GEO). The two main debris fields are the ring of objects in GEO and the cloud of objects in low Earth orbit (LEO) Debris plot by NASA. 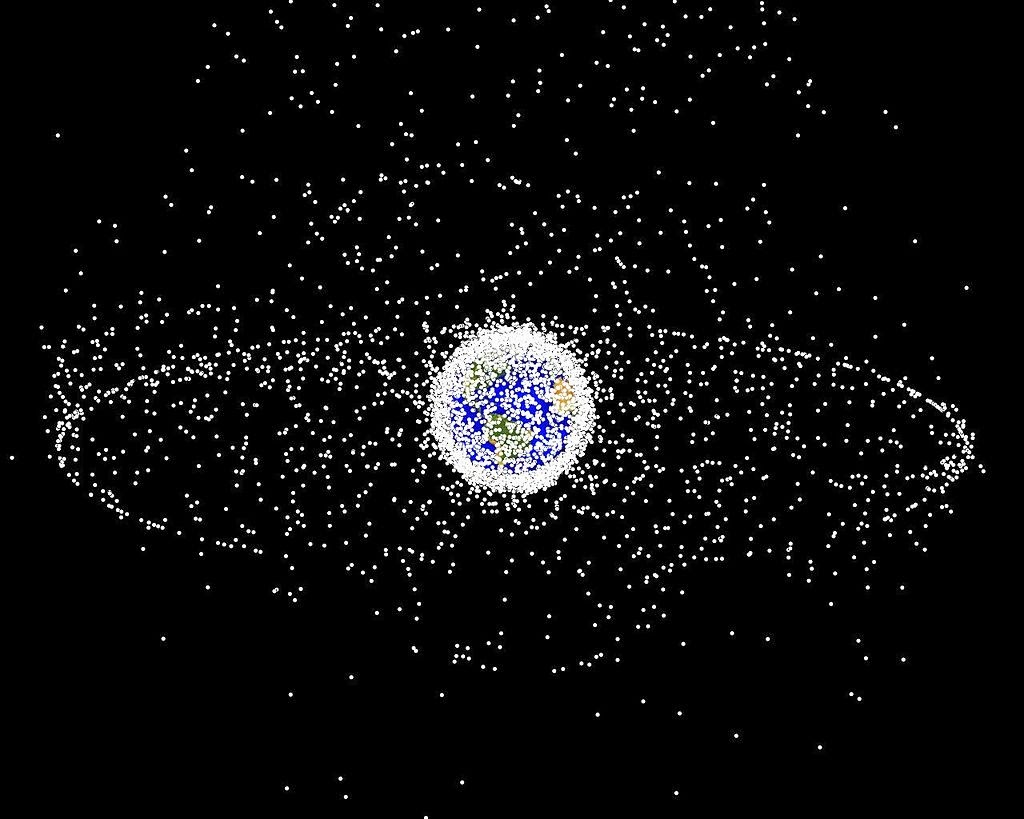 The computer-generated image shows
objects in Earth orbit that are currently being tracked. Approximately 95% of the objects in this illustration are orbital debris, i.e., not functional satellites. The dots represent the current location of each item. The orbital debris dots are scaled according to the image size of the graphic to optimize their visibility and are not scaled to Earth. The image provides a good visualization of where the greatest orbital debris populations exist. This image is generated from a distant oblique vantage point to provide a good view of the object population in the geosynchronous region (around 35,785 km altitude). Note the larger population of objects over the northern hemisphere is due mostly to Russian objects in high-inclination, high-eccentricity orbits.

Space debris, which is continuously accumulating as a result of human space activities, consists of artificial objects orbiting the earth. The number of objects nearly doubled from 2000 to 2014 and they have become a major obstacle to space development. The total mass of space debris is calculated to be about 3,000 tons. It consists of derelict satellites, rocket bodies and parts, and small fragments produced by collisions between debris.

Because the debris exists in different orbits, it is difficult to capture. The objects can collide with space infrastructure such as the International Space Station (ISS) and active satellites. As a result, developing remediation technology has become a major challenge.

The EUSO telescope, which will be used to find debris, was originally planned to detect ultraviolet light emitted from air showers produced by ultra-high energy cosmic rays entering the atmosphere at night. "We realized," says Toshikazu Ebisuzaki, who led the effort, "that we could put it to another use. During twilight, thanks to EUSO's wide field of view and powerful optics, we could adapt it to the new mission of detecting high-velocity debris in orbit near the ISS."

The second part of the experiment, the CAN laser, was originally developed to power particle accelerators. It consists of bundles of optical fibers that act in concert to efficiently produce powerful laser pulses. It achieves both high power and a high repetition rate.

The new method combining these two instruments will be capable of tracking down and deorbiting the most dangerous space debris, around the size of one centimeter. The intense laser beam focused on the debris will produce high-velocity plasma ablation, and the reaction force will reduce its orbital velocity, leading to its reentry into the earth's atmosphere.

The group plans to deploy a small proof-of-concept experiment on the ISS, with a small, 20-centimeter version of the EUSO telescope and a laser with 100 fibers. "If that goes well," says Ebisuzaki, "we plan to install a full-scale version on the ISS, incorporating a three-meter telescope and a laser with 10,000 fibers, giving it the ability to deorbit debris with a range of approximately 100 kilometers. Looking further to the future, we could create a free-flyer mission and put it into a polar orbit at an altitude near 800 kilometers, where the greatest concentration of debris is found."

According to Ebisuzaki, "Our proposal is radically different from the more conventional approach that is ground based, and we believe it is a more manageable approach that will be accurate, fast, and cheap. We may finally have a way to stop the headache of rapidly growing space debris that endangers space activities. We believe that this dedicated system could remove most of the centimeter-sized debris within five years of operation."