Inconspicuous, Tiny Particles Deform the Large-Scale Structure of the Universe

A systematic study of all massive galaxy clusters in the local universe provides information on the lightest elementary particles: Scientists at the Max Planck Institute for Extraterrestrial Physics analysed an X-ray catalogue to show that there is less structure in the universe today than what is expected from the cosmic microwave background observations of the very early universe. This discrepancy can be explained, if the three neutrino families have an overall mass of about half an electron-volt.

We are surrounded by them everywhere and they fly right through us, but we don’t feel them at all - the neutrinos, the strangest among the known elementary particles. They hardly interact with other matter, every second billions fly right through the Earth but only a fraction gets stuck. They are left over in large numbers from the Big Bang, about 340 million per cubic metre on average. Together with photons, the particles of light, they are the most numerous elementary particles in the universe.

Projection of the three-dimensional distribution of galaxy clusters detected in X-rays by the ROSAT satellite. The data are shown in galactic coordinates with the galactic plane in the centre. The gap in the data is due to the “zone-of-avoidance”, an area around the galactic plane where the extinction by the galactic interstellar medium makes observations very difficult. Blue dots are in the northern sky, red dots in the southern sky.

Because of massive neutrinos, the amount of galaxy clusters with a given mass is smaller than predicted by the cosmological standard model based on the results from the Planck satellite. 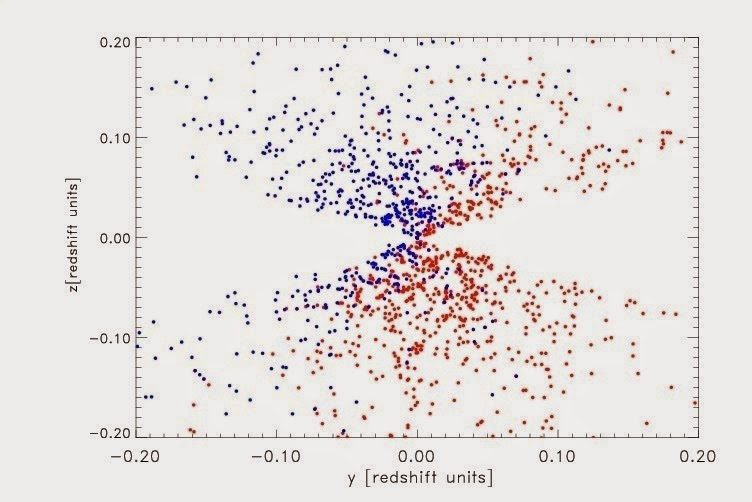 For a long time, neutrinos were thought to be massless. But now we know from observations of solar neutrinos and from terrestrial experiments that they do carry mass. But we still don’t know how heavy they are. Nevertheless, due to their large number density they can contribute significantly to the mass density of the Universe even if they are relatively light-weight.

In space, another property of cosmic neutrinos becomes important: they are the fastest massive elementary particles left over from the Big Bang. While most other matter agglomerates due to gravitational forces over cosmic times into the large-scale structure we see today, neutrinos to some extent resist this concentration and clumping and actually hinder the growth of structure. Their effectivity depends on their mass: The more massive they are, the more they can impede the clumping of matter.

Astrophysics can take advantage of this damping effect, by measuring it in the formation of large-scale structure. A comparison of two observations unveils this effect. On one side, we see the density fluctuations in the early Universe at a time about 380 000 years after the Big Bang. This has been observed in the cosmic microwave background by the Planck satellite. With this input data, we can use accepted cosmological models to calculate quite precisely how the structure in the present day Universe should look like. This allows us to predict, for example, how many clusters of galaxies with a certain mass should be found per unit volume.

Scientists at the Max Planck Institute for Extraterrestrial Physics in Garching, Hans Böhringer and Gayoung Chon, have searched for all massive galaxy clusters in the nearby Universe (out to a distance of more than 3 Billion light years). They used X-ray observations with ROSAT and compiled a complete catalogue of these objects. This then allows a comparison of the observations with predictions from the cosmological standard model.

“Observations and theoretical prediction fit surprising well together,” asserts Hans Böhringer. “But a closer look reveals that the present day structures are less pronounced than predicted - when neglecting the mass of neutrinos.”

Even though the discrepancy is only 10%, the precision of measurements has increased dramatically over the past years, so that the scientists take the 10% discrepancy seriously.

“We can reconcile observation and theory if we allow for the neutrinos to have mass,” explains Gayoung Chon. “Our analysis indicates that all three neutrino families together have a mass in the range 0.17 to 0.73 eV.”

There three neutrino families, electron, muon and tau neutrino, which can “oscillate”, i.e. change into each other. Many experiments – and also the estimate based on the large scale structure – can only determine the mass differences or the mass of all three families combined. And this is indeed tiny: about 0.8 x 10-36 kg, one million times lighter than the mass of the electron, the lightest elementary particle in ordinary matter (that makes up our body).

Neutrinos therefore contribute only about 1-5% to dark matter. But even this tiny contribution causes an effect measurable with the current, precise methods. Some other cosmological measurements, such as the study of the gravitational lensing effect of large-scale structure and the peculiar motions of galaxies, suggest a damping in the growth of the large-scale structure amplitude as well.

Other, more exotic effects could be the cause for such a damping effect, for example the interaction of dark matter and dark energy has been suggested. “Massive neutrinos seem, however, to be the most plausible interpretation of the data at the moment,” says Hans Böhringer. “This is very encouraging and we are currently improving our measurements to provide more precise results in the future.”

This is a fascinating example for how the world is interwoven on smallest and largest scales. The largest clearly defined objects in the Universe, galaxy clusters, provide information on the lightest known elementary particles with mass. There are 48 orders of magnitude in between the mass scale of the two systems! Astrophysics is providing an important contribution to elementary particle physics.