How Fast Is The Universe Expanding?

Certain types of supernovae, or exploding stars, are more diverse than previously thought, a University of Arizona-led team of astronomers has discovered. The results, reported in two papers published in the Astrophysical Journal, have implications for big cosmological questions, such as how fast the universe has been expanding since the Big Bang.

That same galaxy in a NASA Swift image is shown, with bars indicating the location of supernova SN 2011fe. The Swift image is a false-color image with UV emission blue and optical emission red. 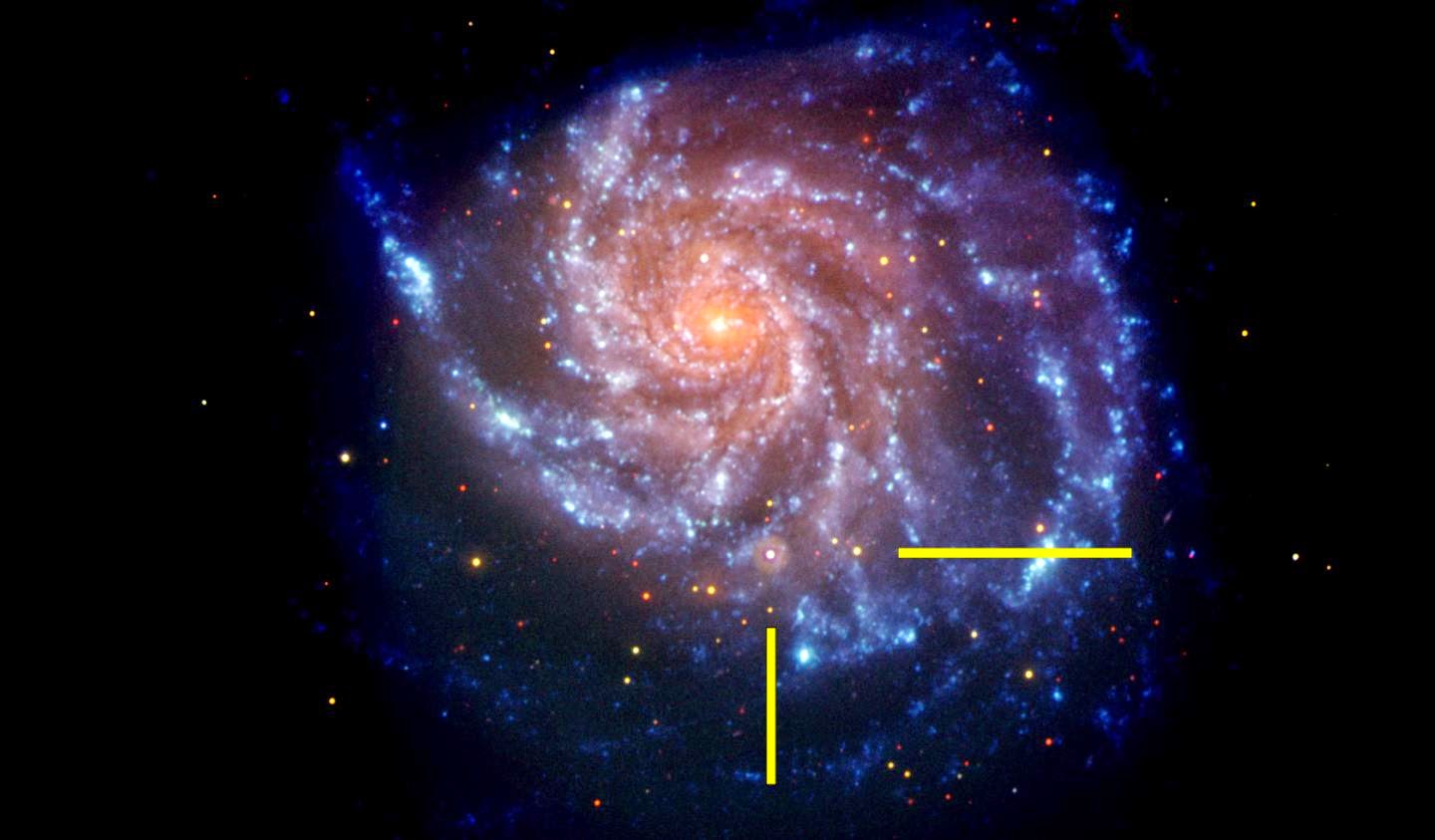 Most importantly, the findings hint at the possibility that the acceleration of the expansion of the universe might not be quite as fast as textbooks say.

The team, led by UA astronomer Peter A. Milne, discovered that type Ia supernovae, which have been considered so uniform that cosmologists have used them as cosmic "beacons" to plumb the depths of the universe, actually fall into different populations. The findings are analogous to sampling a selection of 100-watt light bulbs at the hardware store and discovering that they vary in brightness.

"We found that the differences are not random, but lead to separating Ia supernovae into two groups, where the group that is in the minority near us are in the majority at large distances -- and thus when the universe was younger," said Milne, an associate astronomer with the UA's Department of Astronomy and Steward Observatory. "There are different populations out there, and they have not been recognized. The big assumption has been that as you go from near to far, type Ia supernovae are the same. That doesn't appear to be the case."

The discovery casts new light on the currently accepted view of the universe expanding at a faster and faster rate, pulled apart by a poorly understood force called dark energy. This view is based on observations that resulted in the 2011 Nobel Prize for Physics awarded to three scientists, including UA alumnus Brian P. Schmidt.

The Nobel laureates discovered independently that many supernovae appeared fainter than predicted because they had moved farther away from Earth than they should have done if the universe expanded at the same rate. This indicated that the rate at which stars and galaxies move away from each other is increasing; in other words, something has been pushing the universe apart faster and faster.

"The idea behind this reasoning," Milne explained, "is that type Ia supernovae happen to be the same brightness -- they all end up pretty similar when they explode. Once people knew why, they started using them as mileposts for the far side of the universe.

"The faraway supernovae should be like the ones nearby because they look like them, but because they're fainter than expected, it led people to conclude they're farther away than expected, and this in turn has led to the conclusion that the universe is expanding faster than it did in the past."

Milne and his co-authors -- Ryan J. Foley of the University of Illinois at Urbana-Champaign, Peter J. Brown at Texas A&M University and Gautham Narayan of the National Optical Astronomy Observatory, or NOAO, in Tucson -- observed a large sample of type Ia supernovae in ultraviolet and visible light. For their study, they combined observations made by the Hubble Space Telescope with those made by NASA's Swift satellite.

The data collected with Swift were crucial because the differences between the populations -- slight shifts toward the red or the blue spectrum -- are subtle in visible light, which had been used to detect type Ia supernovae previously, but became obvious only through Swift's dedicated follow-up observations in the ultraviolet.

"These are great results," said Neil Gehrels, principal investigator of the Swift satellite, who co-authored the first paper. "I am delighted that Swift has provided such important observations, which have been made toward a science goal that is completely independent of the primary mission. It demonstrates the flexibility of our satellite to respond to new phenomena swiftly."

"The realization that there were two groups of type Ia supernovae started with Swift data," Milne said. "Then we went through other datasets to see if we see the same. And we found the trend to be present in all the other datasets.

"As you're going back in time, we see a change in the supernovae population," he added. "The explosion has something different about it, something that doesn't jump out at you when you look at it in optical light, but we see it in the ultraviolet.

"Since nobody realized that before, all these supernovae were thrown in the same barrel. But if you were to look at 10 of them nearby, those 10 are going to be redder on average than a sample of 10 faraway supernovae."

The authors conclude that some of the reported acceleration of the universe can be explained by color differences between the two groups of supernovae, leaving less acceleration than initially reported. This would, in turn, require less dark energy than currently assumed.

"We're proposing that our data suggest there might be less dark energy than textbook knowledge, but we can't put a number on it," Milne said. "Until our paper, the two populations of supernovae were treated as the same population. To get that final answer, you need to do all that work again, separately for the red and for the blue population."

The authors pointed out that more data have to be collected before scientists can understand the impact on current measures of dark energy. Scientists and instruments in Arizona will play important roles in these studies, according to Milne. These include projects led by NOAO; the Large Synoptic Survey Telescope, or LSST, whose primary mirror was produced at the UA; and a camera built by the UA's Imaging Technology Lab for the Super-LOTIS telescope on Kitt Peak southwest of Tucson. Super-LOTIS is a robotic telescope that will use the new camera to follow up on gamma-ray bursts -- the "muzzle flash" of a supernova -- detected by Swift.


Contacts and sources:
University of Arizona
on April 13, 2015