Dinosaurs might have survived the 10-kilometer asteroid strike that wiped them out if it had taken place slightly earlier or later in history.

Around 66 million years ago most of the world’s dinosaurs were wiped out by a massive asteroid that slammed into Earth in Mexico, at a place now known as Chicxulub  . The asteroid, which is thought to have been10 kilometers wide,  hit Earth with a force one billion times more powerful than the atomic bomb at Hiroshima. It would have blasted material at high velocity into the atmosphere, triggering a chain of events that caused a global winter, wiping out much of life on Earth in a matter of days. 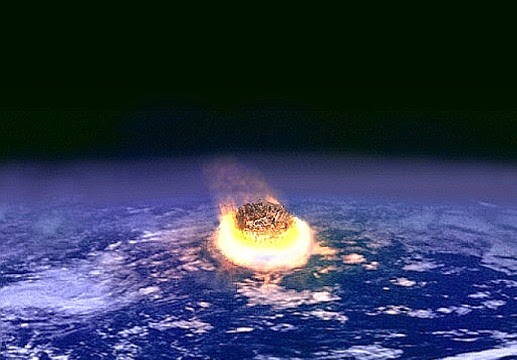 An international research team is formalizing plans to drill nearly 5,000 feet below the seabed to take core samples from the crater of the asteroid that wiped out the dinosaurs.

The group met recently in Merida, Mexico, a city within the nearly 125-mile-wide impact site, to explain the research plans and put out a call for scientists to join the expedition planned for spring 2016. The roughly $10 million in funding for the expedition has been approved and scheduled by the European Consortium for Ocean Research Drilling (ECORD) — part of the International Ocean Discovery Program (IODP) — and the International Continental Scientific Drilling Program (ICDP).

Dinosaurs and other reptiles ruled the planet for 135 million years. That all changed 65 million years ago when a 9-mile-wide asteroid slammed into the Earth, triggering a series of apocalyptic events that killed most large animals and plants, and wiped out the dinosaurs and large marine reptiles. The event set the stage for mammals — and eventually humans — to take over. Yet, we have few geologic samples of the now buried impact crater.

Sean Gulick, a researcher at The University of Texas at Austin Institute for Geophysics (UTIG), and a team of scientists from the U.K. and Mexico are working to change that. The team is planning to take the first offshore core samples from near the center of the impact crater, which is called Chicxulub after the seaside village on the Yucatán Peninsula near the crater’s center.

The team, led by Gulick and Joanna Morgan of Imperial College London, will be sampling the crater’s “peak ring” — an enigmatic ring of topographically elevated rocks that surrounds the crater’s center, rises above its floor and has been buried during the past 65 million years by sediments.

The Chicxulub crater has been filled in by sediments over the millions of years since impact. Using a gravity map, the crater’s topological features can be visualized. The red and yellow are gravity highs, and green and blue are gravity lows. The white dots indicate a network of sinkholes called “cenotes,”which were formed as a result of the impact. 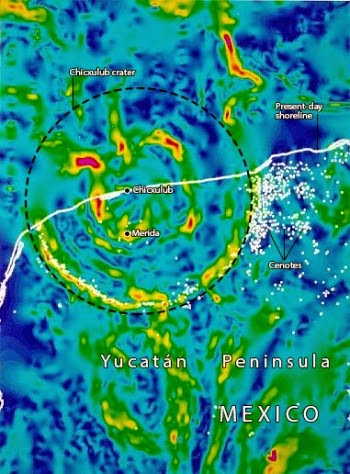 A peak ring is a feature that is present in all craters caused by large impacts on rocky planetoids. By sampling the Chicxulub peak ring and analyzing its key features, researchers hope to uncover the impact details that set in motion one of the planet’s most profound extinctions, while also shedding light on the mechanisms of large impacts on Earth and on other rocky planets.

“What are the peaks made of? And what can they tell us about the fundamental processes of impacts, which is this dominant planetary resurfacing phenomena?” said Gulick, who is also a research associate professor at the UT Jackson School of Geosciences. UTIG is a research unit of the Jackson School.

An artist’s impression of the Chicxulub asteroid impacting the Yucatan Peninsula as pterodactyls fly in the sky above. 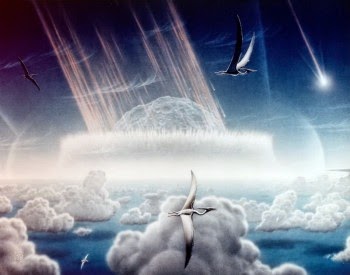 The researchers are also interested in examining traces of life that may have lived inside the peak ring’s rocks. Density readings of the rocks indicate that they probably are heavily broken and porous — features that may have served as protected microenvironments for exotic life that could have thrived in the hot, chemically enriched environment of the crater site after impact. Additionally, the earliest recovery of marine life should be recorded within the sediments that filled in the crater in the millions of years after the impact.

“The sediments that filled in the [crater] should have the record for organisms living on the sea floor and in the water that were there for the first recovery after the mass extinction event,” Gulick said. “The hope is we can watch life come back.”

The expedition will last for two months and involve penetrating nearly 5,000 feet beneath the seabed from an offshore platform. The core will be the first complete sample of the rock layers from near the crater’s center.

Once extracted, the core will be shipped to Germany and split in two. Half will be immediately analyzed by an international team of scientists from the U.S., U.K., Mexico and other nations, and half will be saved at a core repository at Texas A&M University for future research needs by the international community.

Dr Philip Mannion, a Junior Research Fellow from the Department of Earth Science and Engineering at the Imperial College London, said: “The Earth just before the asteroid impact 66 million years ago was under great environmental stress. The world was hotter than today. There were no polar caps and sea levels were around 20 metres higher than what they are today, reducing the amount of land that dinosaurs had to live on. Also, the place we now know as India was experiencing massive eruptions from super volcanoes, which affected the atmosphere. All these factors placed a great strain on the dinosaurs and the ecosystems they depended on to survive. The asteroid impact was the final straw that wiped out the beleaguered dinosaurs.”

Dr Steve Brusatte, of the University of Edinburgh’s School of GeoSciences, said: “The dinosaurs were victims of colossal bad luck. Not only did a giant asteroid strike, but it happened at the worst possible time, when their ecosystems were vulnerable. Our new findings help clarify one of the enduring mysteries of science.”
Although the impact hypothesis is the most widely accepted explanation of the K/T extinction, other theories still remain. Evidence of widespread volcanism, particularly at the Deccan traps in India, correlates with this moment in time as well. Prolonged volcanism could have led to atmospheric and climatic changes similar to those proposed for an asteroid impact. However, volcanism does not provide an alternate explanation for the high levels of iridium in the clay layer, because high concentrations of iridium occur deep in Earth's core rather than in the mantle, which is the source of the magma that was erupted.

One debate centers on whether the extinction was truly as sudden as it appears, or whether this is an artifact of the geological record. Some scientists believe that dinosaurs went extinct gradually, and were doing so for millions of years prior to the K/T boundary. Studies in the Western Interior of North America have suggested that the latest layers of Cretaceous sediments contain fewer dinosaur species than those below. These results have been challenged by other researchers, who claim that no such decrease is apparent in the Late Cretaceous record.

The team also includes researchers from the National Autonomous University of Mexico (UNAM) and Centro de Investigación Científica de Yucatán (CICY). Scientists interested in joining the mission must apply by May 8, 2015. For more information on the mission and the application process, see the European Consortium for Ocean Research Drilling’s call for applications.