Many, perhaps most, stars in the Universe live their lives with companions by their sides – in so-called binary systems. Until recently, however, the ancient RR Lyrae stars appeared, for mysterious reasons, to live their lives all alone. A recent study led by Chilean astronomers shows that RR Lyrae stars may not be as lonely as previously thought. The new research is published in Monthly Notices of the Royal Astronomical Society Letters.

Map of the sky towards the central bulge of the Milky Way, with the positions of the binary candidates indicated as red circles. The background image is based on near-infrared observations obtained in the course of the Vista Variables in the Vía Láctea (VVV) ESO Public Survey. The scale is approximately 20 by 15 degrees. 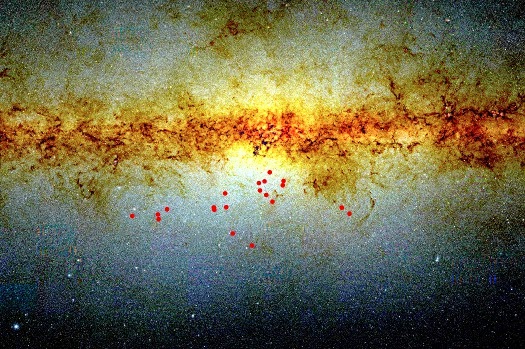 Stars are very often found not in isolation, but rather in pairs. In these so-called binary systems, two stars orbit around their common centre of gravity. Suitable binary systems are of extreme importance in astrophysics, as their properties can be inferred with unparalleled accuracy from detailed analysis of their orbital properties.

Puzzlingly, however, an overwhelming majority of the known members of a very important family of stars, known to astronomers as RR Lyrae variables, have for long appeared to live their lives all alone. These stars, being among the oldest known in the cosmos, contain precious information about the origin and evolution of the stellar systems that harbour them, such as the Milky Way itself. However, the lack of RR Lyrae stars in binary systems has made a direct assessment of some of their key properties difficult. Most often, theory had to be invoked to fill the gap.

This apparent solitude has always intrigued astronomers. Now, however, an international research team led by experts of theMillennium Institute of Astrophysics (MAS) and the Pontificia Universidad Católica de Chile's Institute of Astrophysics (IA-PUC) have found evidence that these stars may not abhor companionship so thoroughly after all. In a Letter published in the journal Monthly Notices of the Royal Astronomical Society, the team reports on the identification of as many as 20 candidate RR Lyrae binaries – an increase of up to 2000% with respect to previous tallies. Twelve of those candidates have enough measurements to conclude with high confidence that they do indeed consist of two stars orbiting each other.

"In the solar neighbourhood, about every second star is in a binary. The problem with RR Lyrae variables is that for a long time only one of them was known to be in a long-period binary system. The fact that among 100,000 known RR Lyrae stars only one of them had been seen to have such a companion was something really intriguing for astronomers," explains Gergely Hajdu, IA-PUC Ph.D. student, MAS researcher, and lead author of the study.

Animation showing the light-travel time effect. The upper plot shows the brightness of a binary RR Lyrae star (OGLE-RRLYR-06498) as a function of time. Grey symbols indicate all the available individual measurements, whereas the red symbols show an selection of the data points as they were collected over time. The bottom plot shows the same data, but folded according to the pulsation period. The main brightness variations show up as a sawtooth-like distribution corresponding to the pulsation of the RR Lyrae variable, whilst the back-and-forth movement shown by the red dots is the signal that is brought about by the presence of a binary companion.

In their paper, the authors used a method that astronomers call the "light-travel time effect," which exploits subtle differences in the time it takes starlight to reach us.

"The RR Lyrae stars pulsate regularly, significantly increasing, and then decreasing, their sizes, temperatures, and brightness, in a matter of just a few hours. When a pulsating star is in a binary system, the changes in brightness perceived by us can be affected by where exactly the star is in the course of its orbit around the companion. Thus, the starlight takes longer to reach us when it is at the farthest point along its orbit, and vice-versa. This subtle effect is what we have detected in our candidates," according to Hajdu.

"Our measurements were based on data published by the Polish OGLE Project. The OGLE team have obtained their data using the 1.3m Warsaw telescope, located in Las Campanas Observatory, northern Chile, repeatedly observing the same patches of the sky for many years. Our 20 candidates were found analysing the roughly 2000 best observed RR Lyrae stars towards the central parts of the Milky Way. That's about 5% of the known ones. It was only thanks to the high quality of the OGLE data and the long timespan of these observations that we could finally find signs of companions around so many of these stars," says Hajdu.

Indeed, the systems detected by Hajdu et al. have orbital periods of several years, which indicates that the companions, though bound together by gravity, are not very close to one another. "Binaries with even longer periods may also exist, but the current data do not extend long enough for us to reach strong conclusions in this respect," he adds.

For co-author Márcio Catelan, MAS Associate Researcher, IA-PUC astrophysicist and Hajdu's thesis advisor, these results have significant implications for astrophysics. "These are extremely old stars, which have witnessed the formation of galaxies like our own Milky Way, and survived to tell us the story. Besides, they are easy to identify, since they show characteristic, cyclical brightness variations, which make them excellent distance indicators for the nearby Universe. However, a lot of what we know about them relies on theoretical modelling. We can now exploit the orbital information contained in these binary systems – and there are quite a few of them now – in order to directly measure their physical properties, especially their masses but possibly also their diameters, thus opening new doors to discoveries that until recently seemed impossible.", he says.

This is just the first step towards achieving these goals, however: according to Catelan, more data will be needed, particularly follow-up observations of the binary candidates with sophisticated techniques like spectroscopy and astrometry. The rewards awaiting at the end of the road seem well worth the long journey, and the RR Lyrae will happily traverse that path with their companions firmly by their sides.