Why Is A Dolphin Not A Cat? How Repurposing Non-Coding Elements In The Genome Gave Rise To The Great 'Mammalian Radiation'

New research shows how evolution has given rise to a rich diversity of species by repurposing functional elements shared by all mammals. Published in Cell by scientists at the European Bioinformatics Institute (EMBL-EBI) and the University of Cambridge Cancer Research UK-Cambridge Institute (CRUK CI), the study demonstrates how methods for understanding human biology can be used to understand a broad range of species.

Exploring gene regulation in 20 mammals provides insights into the mammalian radiation that occurred over 100 million years ago. 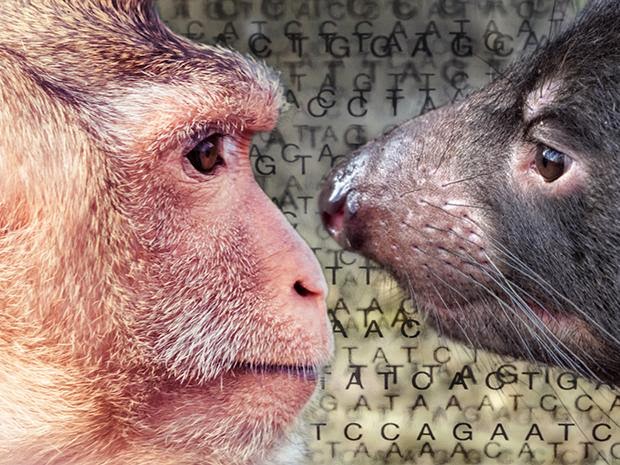 Mammals all share a common ancestor, and they share a lot of the same genes. So what exactly makes a dolphin not a cat, and how did we all start to diverge from one another millions of years ago? Part of the answer lies in how - and when - genes are regulated. This latest research explores the evolution of gene regulation in 20 mammalian species, and provides deep insights into the 'mammalian radiation', a time of rapid morphological evolution that occurred shortly after the asteroid impact that caused the extinction of the dinosaurs.

Leveraging findings from a study comparing the genome sequences of 29 mammals, and with the help of conservation organisations such as the UK Cetacean Strandings Investigation Programme and the Copenhagen Zoo, the team were able to study and compare gene regulation in liver cells from 20 key species including the naked mole rat, human, Tasmanian devil, dolphin and sei whale.

"What we've shown is that evolution repurposes things that exist in all species, to make each species unique," explains Paul Flicek, head of Vertebrate Genomics at EMBL-EBI. "By looking at gene promoters and enhancers in many different mammals, we demonstrated that species-specific enhancers come from ancient DNA - that evolution captures DNA that's been around for a long time, and uses it for gene regulation in specific tissues."

Evolution has two ways to turn changes in the genome into differences between species: it can change a protein sequence, or it can change the way promoters or enhancers control that protein's expression. Today's study also shows that in some cases evolution uses both strategies at once. When amino acid sequences evolve very quickly, important regulation changes occur at the same time: the protein-coding sequence and the corresponding regulatory sequence change synergistically.

Gathering the samples - the experimental efforts were led by Diego Villar of CRUK CI - took well over two years, and the experiments themselves produced a staggering volume of data. Analysing the results brought the team to a new frontier in bioinformatics.

"People spend a lot of time and money trying to understand human biology, so most of the tools we have are designed to study human genomes," explains Camille Berthelot of EMBL-EBI, who led the computational work. "The reference data we have for the less studied species, like the Sei whale or Tasmanian devil, are nothing like the pored-over datasets we have for the human genome. A lot of what we did involved benchmarking, and making sure the methods and algorithms were fit for this kind of comparison."

"What inspired this work was a desire to get on top of the mountain, look out and see what is going on in the landscape of molecular evolution across the breadth of mammalian space," says Duncan Odom of CRUK CI and Wellcome Trust Sanger Institute. "What's exciting about this study is that we now know we can start to answer questions about the functional genetics of many under-explored species - questions we usually can ask only of humans and mice. We can use tools developed to study humans to understand the biology of all kinds of animals, whether they're blackbirds or elephants, and explore their relationship with one another. This research has given us new insights into mammalian evolution, and proven how powerful these methods can be."