Watching The Birth Of A Comet Magnetosphere

In an article in Science an international research group led from the Swedish Institute of Space Physics shows what happens when a magnetosphere forms round a comet. The RPC-ICA instrument onboard the Rosetta spacecraft has been watching the early stages of how a magnetosphere forms around Comet 67P Churyumov-Gerasimenko as it moves closer to the Sun along its orbit and begins to interact with the solar wind.

OSIRIS wide-angle camera image acquired on 22 November 2014 from a distance of 30 km from Comet 67P/C-G. 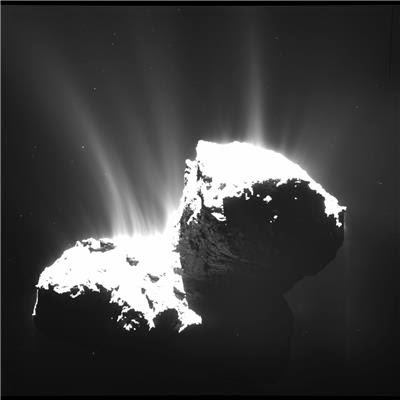 As the comet gets warmer, volatile substances, mainly water, evaporate from the surface and form an atmosphere around the comet. The Sun's ultraviolet radiation and collisions with the solar wind ionizes some of the comet's atmosphere. The newly formed ions are affected by the solar wind electric and magnetic fields and can be accelerated to high speeds. When the comet gets close enough to the Sun, its atmosphere becomes so dense and ionized that it becomes electrically conductive. When this happens, the atmosphere starts to resist the solar wind and a comet's magnetosphere is born - a region surrounding the comet that is shielded from the solar wind.

Rosetta’s RPC-ICA instrument detected low velocity water ions in data collected on 7 August 2014, one day after arriving at Comet 67P/C-G at a distance of 100 km.

"It was an unambiguous signature of the comet, a clear detection of ions from the comet's atmosphere," says Associate Professor Hans Nilsson at the Swedish Institute of Space Physics (IRF) in Kiruna. Hans Nilsson is responsible for the instrument Ion Composition Analyser, ICA, developed and built in Kiruna. The instrument measures positively charged ions and is one of five instruments in the Rosetta Plasma Consortium.

"Rosetta is a unique space mission," adds Hans Nilsson. "Previous spacecraft that have studied comets have rushed past them at a great distance and at speeds of tens of kilometres per second. At the time of previous spacecraft-comet encounters, the comet magnetosphere has been fully developed."

By comparison, Rosetta is currently orbiting around 67P/C-G at a distance of just a few tens of kilometres, and at low speed. Importantly, the mission arrived at the comet in time to watch the very early stages of the magnetosphere formation.

The results are published in the 23 January issue of Science.