Survey data reveal a more disordered stellar population in our galactic neighbor than in our own galaxy, suggesting more recent bombardment of Andromeda by smaller galaxies

A detailed study of the motions of different stellar populations in the disk of the Andromeda galaxy has found striking differences from our own Milky Way, suggesting a more violent history of mergers with smaller galaxies in Andromeda's recent past.

This Hubble image of a crowded star field in the disk of the Andromeda galaxy shows that stars of different ages can be distinguished from one another on basis of temperature (as indicated by color) and brightness. 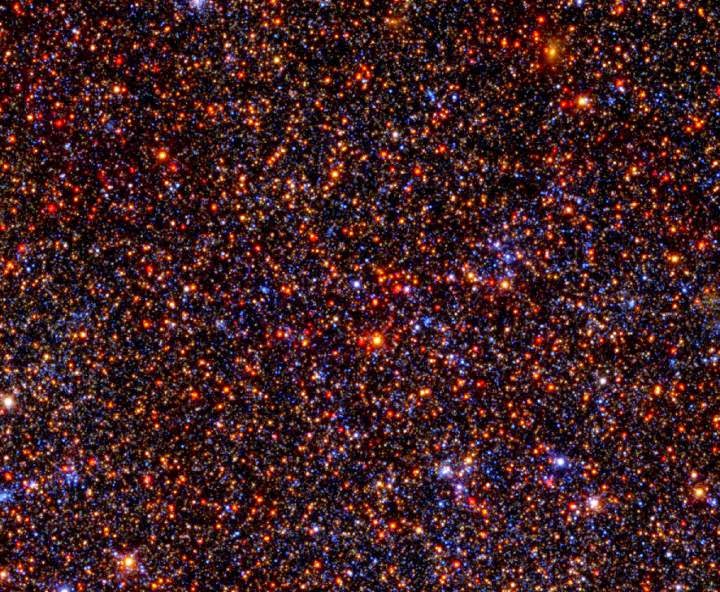 The structure and internal motions of the stellar disk of a spiral galaxy hold important keys to understanding the galaxy's formation history. The Andromeda galaxy, also called M31, is the closest spiral galaxy to the Milky Way and the largest in the local group of galaxies.

"In the Andromeda galaxy we have the unique combination of a global yet detailed view of a galaxy similar to our own. We have lots of detail in our own Milky Way, but not the global, external perspective," said Puragra Guhathakurta, professor of astronomy and astrophysics at the University of California, Santa Cruz.

The new study, led by UC Santa Cruz graduate student Claire Dorman and Guhathakurta, combined data from two large surveys of stars in Andromeda, one conducted at the W. M. Keck Observatory in Hawaii and the other using the Hubble Space Telescope. The Spectroscopic and Photometric Landscape of Andromeda's Stellar Halo (SPLASH) survey has used the Keck/DEIMOS multi-object spectrograph to measure radial velocities of more than 10,000 individual bright stars in Andromeda. The recently completed Panchromatic Hubble Andromeda Treasury (PHAT) survey provides high-resolution imaging at six different wavelengths for more than half of these stars.

"The high resolution of the Hubble images allows us to separate stars from one another in the crowded disk of Andromeda, and the wide wavelength coverage allows us to subdivide the stars into sub-groups according to their age," said Dorman, who is presenting her findings on Thursday, January 8, at the winter meeting of the American Astronomical Society in Seattle. The study presents the velocity dispersion of young, intermediate-age, and old stars in the disk of Andromeda, the first such measurement in another galaxy.

Dots show locations of stars in the spectroscopic survey superimposed on an image of the Andromeda galaxy (M31). Dots are color coded according to their velocity relative to the Milky Way, as measured using the DEIMOS spectrograph on the Keck II telescope. The center of M31 is moving towards us at 300 km/s, whereas stars to the northeast of the center have more positive velocities, indicating that they are moving away from us relative to M31's center. 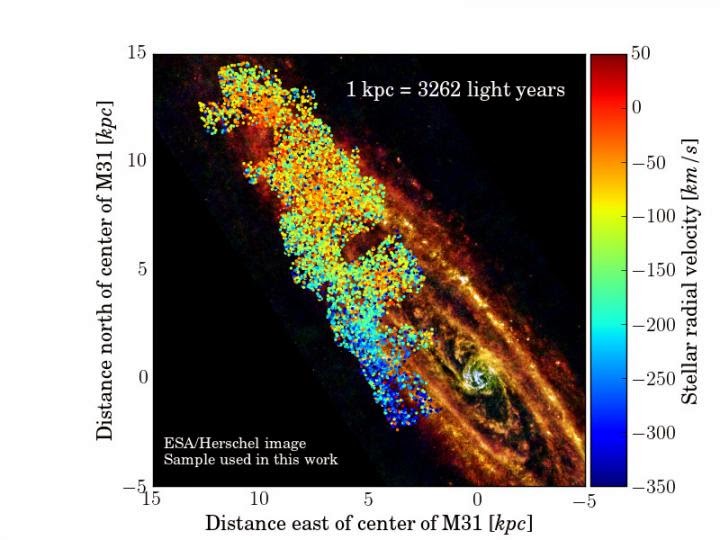 Credit:  Claire Dormanm European Space Agency
Dorman's analysis revealed a clear trend related to stellar age, with the youngest stars showing relatively ordered rotational motion around the center of the Andromeda galaxy, while older stars displayed much more disordered motion. Stars in a "well ordered" population are all moving coherently, with nearly the same velocity, whereas stars in a disordered population have a wider range of velocities, implying a greater spatial dispersion.

The researchers considered different scenarios of galactic disk formation and evolution that could account for their observations. One scenario involves the gradual disturbance of a well-ordered disk of stars as a result of mergers with small satellite galaxies. Previous studies have found evidence of such mergers in tidal streams of stars in the extended halo of Andromeda, which appear to be remnants of cannibalized dwarf galaxies. Stars from those galaxies can also accrete onto the disk, but accretion alone cannot account for the observed increase in velocity dispersion with stellar age, Dorman said.

According to Dorman, a combination of these mechanisms could account for the team's observations. "Our findings should motivate theorists to carry out more detailed computer simulations of these scenarios," she said.

The comparison to the Milky Way revealed substantial differences suggesting that Andromeda has had a more violent accretion history in the recent past. "Even the most well ordered Andromeda stars are not as well ordered as the stars in the Milky Way's disk," Dorman said.

In the currently favored "Lambda Cold Dark Matter" paradigm of structure formation in the universe, large galaxies such as Andromeda and the Milky Way are thought to have grown by cannibalizing smaller satellite galaxies and accreting their stars and gas. Cosmologists predict that 70 percent of disks the size of Andromeda's and the Milky Way's should have interacted with at least one sizable satellite in the last 10,000 years. The Milky Way's disk is much too orderly for that to have happened, whereas Andromeda's disk fits the prediction much better.

"In this context, the motion of the stars in Andromeda's disk is more normal, and the Milky Way may simply be an outlier with an unusually quiescent accretion history," Guhathakurta said.