Strong irradiation from the host star can cause planets known as mini-Neptunes in the habitable zone to shed their gaseous envelopes and become potentially habitable worlds. 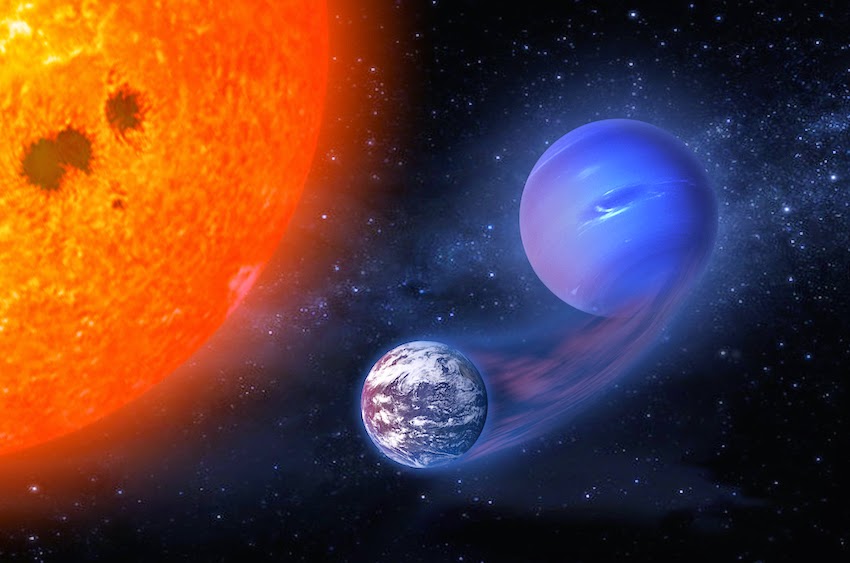 Most of the stars in our galaxy are low-mass stars, also called M dwarfs. Smaller and dimmer than the sun, with close-in habitable zones, they make good targets for finding and studying potentially habitable planets. Astronomers expect to find many Earthlike and "super-Earth" planets in the habitable zones of these stars in coming years, so it's important to know if they might indeed support life.

Super-Earths are planets greater in mass than our own yet smaller than gas giants such as Neptune and Uranus. The habitable zone is that swath of space around a star that might allow liquid water on an orbiting rocky planet's surface, perhaps giving life a chance.

"There are many processes that are negligible on Earth but can affect the habitability of M dwarf planets," Luger said. "Two important ones are strong tidal effects and vigorous stellar activity."

A tidal force is a star's gravitational tug on an orbiting planet, and is stronger on the near side of the planet, facing the host star, than on the far side, since gravity weakens with distance. This pulling can stretch a world into an ellipsoidal or egglike shape as well as possibly causing it to migrate closer to its star.

"This is the reason we have ocean tides on Earth, as tidal forces from both the moon and the sun can tug on the oceans, creating a bulge that we experience as a high tide," Luger said. "Luckily, on Earth it's really only the water in the oceans that gets distorted, and only by a few feet. But close-in planets, like those in the habitable zones of M dwarfs, experience much stronger tidal forces."

This stretching causes friction in a planet's interior that gives off huge amounts of energy. This can drive surface volcanism and in some cases even heat the planet into a runaway greenhouse state, boiling away its oceans, and all chance of habitability.

Vigorous stellar activity also can destroy any chance for life on planets orbiting low-mass stars. M dwarfs are very bright when young and emit lots of high-energy X-rays and ultraviolet radiation that can heat a planet's upper atmosphere, spawning strong winds that can erode the atmosphere away entirely. In a recent paper, Luger and Barnes showed that a planet's entire surface water can be lost due to such stellar activity during the first few hundred million years following its formation.

"But things aren't necessarily as grim as they may sound," Luger said. Using computer models, the co-authors found that tidal forces and atmospheric escape can sometimes shape planets that start out as mini-Neptunes into gas-free, potentially habitable worlds.

How does this transformation happen?

"They are initially freezing cold, inhospitable worlds," Luger said. "But planets need not always remain in place. Alongside other processes, tidal forces can induce inward planet migration." This process can bring mini-Neptunes into their host star's habitable zone, where they are exposed to much higher levels of X-ray and ultraviolet radiation.

This can in turn lead to rapid loss of the atmospheric gases to space, sometimes leaving behind a hydrogen-free, rocky world smack dab in the habitable zone. The co-authors call such planets "habitable evaporated cores."

"Such a planet is likely to have abundant surface water, since its core is rich in water ice," Luger said. "Once in the habitable zone, this ice can melt and form oceans," perhaps leading to life.

Barnes and Luger note that many other conditions would have to be met for such planets to be habitable. One is the development of an atmosphere right for creating and recycling nutrients globally.

Another is simple timing. If hydrogen and helium loss is too slow while a planet is forming, a gaseous envelope would prevail and a rocky, terrestrial world may not form. If the world loses hydrogen too quickly, a runaway greenhouse state could result, with all water lost to space.

"The bottom line is that this process -- the transformation of a mini-Neptune into an Earthlike world -- could be a pathway to the formation of habitable worlds around M dwarf stars," Luger said.

Will they truly be habitable? That remains for future research to learn, Luger said.

"Either way, these evaporated cores are probably lurking out there in the habitable zones of these stars, and many may be discovered in the coming years."

University of Washington
on January 30, 2015