National Weather Service forecasters have been tracking a low pressure area that moved from the Midwest into the Atlantic Ocean today, and is expected to become a strong nor'easter that will bring blizzard conditions to the northeastern U.S. The path of the system was captured in a NASA movie of NOAA's GOES-East satellite imagery.

NOAA's GOES-East satellite captured the center of the developing Nor'easter located off North Carolina's Outer Banks on Jan. 26 in the image from 16:30 UTC (12:30 p.m. EST). 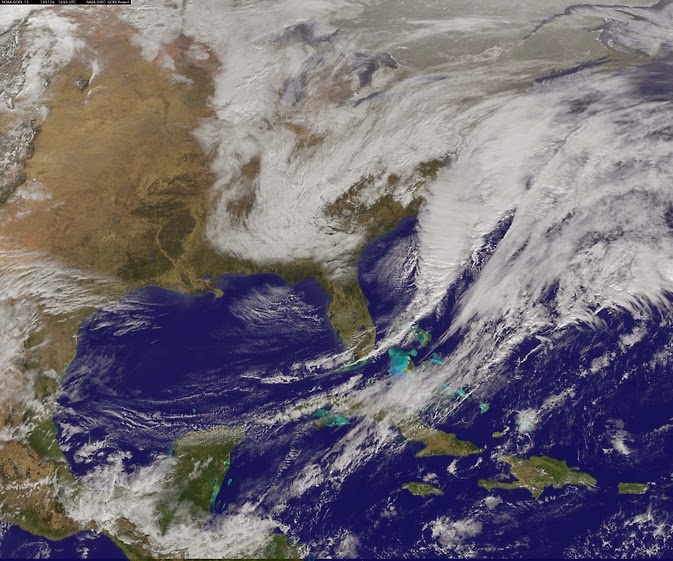 An animation of visible and infrared imagery from NOAA's Geostationary Operational Environmental or GOES satellite captured over the period of January 24 through 26 showed the progression of the developing nor'easter.

The satellite animation began on Jan. 24 when clouds associated with a cold front preceding the low, pushed off the U.S. East coast. The front was followed by a low pressure area that moved from the Midwest to the southeast. That low moved over the Carolinas and exited into the Atlantic Ocean on Jan. 26. NOAA's National Weather Service forecast calls for the low to intensify along the Eastern Seaboard and bring blizzard conditions to the northeastern U.S. on Monday night, January 26 and Tuesday, January 27.

This GOES-East animation shows a cold front push off the U.S. East coast followed by a low pressure area from the Midwest moved southeast and exited the Carolinas into the Atlantic Ocean. That low pressure area is forecast to intensify into a Nor'easter.

On Monday, January 26, 2015, the National Weather Service noted: A storm system off the East Coast will continue to strengthen as it develops into a major nor'easter on Monday. As the storm moves up the coast, it is expected to bring snowfall of 1-3 feet or more to many parts of the Northeast through Tuesday evening, including New York City and Boston. Strong, gusty winds will combine with the snow to create blizzard conditions along and near the coast.

To create the video and imagery, NASA/NOAA's GOES Project located at NASA's Goddard Space Flight Center in Greenbelt, Maryland overlays the cloud data from NOAA's GOES-East satellite on a true-color image of land and ocean created by data from the Moderate Resolution Imaging Spectroradiometer, or MODIS, instrument that flies aboard NASA's Aqua and Terra satellites. Together, these data create the entire animation of the storm and show its movement.

GOES satellites provide the kind of continuous monitoring necessary for intensive data analysis. Geostationary describes an orbit in which a satellite is always in the same position with respect to the rotating Earth. This allows GOES to hover continuously over one position on Earth's surface, appearing stationary. As a result, GOES provide a constant vigil for the atmospheric "triggers" for severe weather conditions such as tornadoes, flash floods, hail storms and hurricanes.