Rosetta Reveals Churi's Secrets: Witness To The Birth Of The Solar System And More

With its surprising two-lobed shape and high porosity, the nucleus of comet 67P/Churyumov-Gerasimenko (nicknamed Churi) has a wide range of features, revealed by the MIRO, VIRTIS and OSIRIS instruments of ESA's Rosetta mission, which involves researchers from the CNRS, the Paris Observatory and several universities , with support from CNES.

Credit: © ESA/Rosetta/ROSINA/UBern, BIRA, LATMOS, LMM, IRAP, MPS, SwRI, TUB, Umich  The seven papers published on 23 January 2015 in Science also show that the comet is rich in organic material and that the geological structures observed on the surface mainly result from erosion processes. In addition, the RPC-ICA instrument traced the evolution of the comet's magnetosphere, while the ROSINA spectrometer searched for evidence of the birth of the Solar System.

The composition of the comet's surface is very homogeneous, with a small difference in the neck region, which may contain water ice.

The nucleus of 67P/Churyumov-Gerasimenko

The images of comet 67P taken by the OSIRIS camera show an unusual overall shape made up of two lobes separated by a 'neck' of unknown origin. Its surface, whose overall composition is homogeneous, displays a wide variety of geological structures caused by erosion, collapse and redeposition processes. The comet's activity, which is surprising at such great distance from the Sun, is currently concentrated in the 'neck' region.

The entire series of images was used to make a three-dimensional model of the comet as well as map the detailed topography of Philae's original landing site. Combined with the measurement of its mass, this model has provided the first-ever direct determination of the density of a cometary nucleus, which implies that it is extremely porous. The model also provides a cartographic context for the interpretation of the results of the other experiments.

The surface properties of 67P/Churyumov-Gerasimenko

The MIRO instrument enabled the researchers to draw up a map of the near subsurface of 67P. The map shows seasonal and diurnal variations in temperature that point to low thermal conductivity of the surface of 67P, due to its porous, low-density structure. The researchers also carried out measurements of the comet's water production rate, which varies as the nucleus rotates, since the water outgassing from the comet is localized in its 'neck'. 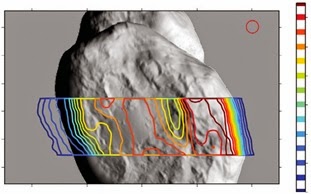 A comet rich in organic material

VIRTIS provided the first detection of organic materials on a cometary nucleus. Its spectroscopic measurements indicate the presence of various materials containing carbon-hydrogen and/or oxygen-hydrogen bonds, while nitrogen-hydrogen bonds have not been detected at present. These species are associated with dark, opaque minerals such as iron sulfides (pyrrhotite and troilite). In addition, the measurements show that no water ice-rich patches exceeding twenty meters across are observed in sunlit regions, which indicates that the top few centimeters of the surface are strongly dehydrated.

The birth of a comet's magnetosphere

Using the RPC-ICA (Ion Composition Analyser) instrument, the researchers traced the evolution of water ions, from the first detection until the moment when the cometary atmosphere began to repel the solar wind (at around 3.3 AU ). They thus recorded the spatial structure of the early interaction between the solar wind and the thin cometary atmosphere, which gave rise to the formation of Churi's magnetosphere.

67P/Churyumov-Gerasimenko, a witness to the birth of the Solar System

Formed around 4.5 billion years ago and remaining frozen ever since, comets preserve traces of the original matter of the Solar System. The composition of their nucleus and coma thus gives us clues about the physical and chemical conditions in the early Solar System. The Rosetta spacecraft's ROSINA instrument measured the composition of 67P's coma (the coma is a sort of relatively dense atmosphere surrounding the nucleus, made up of a mixture of dust and gas molecules) by monitoring the comet's rotation. The results show that there are large fluctuations in the heterogeneous composition of the coma, as well as a complex coma-nucleus relationship where seasonal variations may be driven by temperature differences just below the comet surface..

Example of a circular pit observed on the nucleus of comet 67P.. Enhancing the contrast reveals the presence of activity. Image taken by the OSIRIS-NAC camera on 28 August 2014 from a distance of 60 km, with a spatial resolution of 1 m/pixel.

The dust of comet 67P/Churyumov-Gerasimenko

The GIADA dust detector has already collected a wealth of data (size, speed, direction, composition) about the dust emitted directly from the nucleus, which ranges in size from 0.1 to several millimeters. In addition, the OSIRIS images were also used to detect larger dust grains orbiting the nucleus, probably emitted during an earlier passage of the comet.