A fossil specimen discovered by a farmer in China represents the oldest record of post-natal parental care, dating back to the Middle Jurassic.

The tendency for adults to care for their offspring beyond birth is a key feature of the reproductive biology of living archosaurs – birds and crocodilians – with the latter protecting their young from potential predators and birds, not only providing protection but also provision of food. 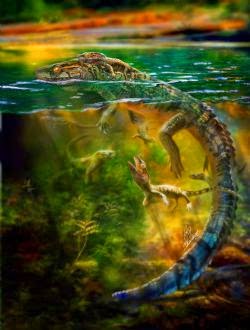 This behaviour seems to have evolved numerous times in vertebrates, with evidence of a long evolutionary history in diapsids – a group of amniotes which developed holes in each side of the skull about 300 million years ago and from which all existing lizards, snakes and birds are descended

However, unequivocal evidence of post-natal parental care is extremely rare in the fossil record and is only reported for two types of dinosaurs and varanopid ‘pelycosaurs’ – a reptile which resembled a monitor lizard.

A new study by the Institute of Geology, Chinese Academy of Geological Sciences, Beijing; the University of Lincoln, UK; and Hokkaido University, Japan, presents new evidence of post-natal parental care in Philydrosauras, a choristodere from the Yixian Formation of western Liaoning Province, China. Choristoderes are a group of relatively small aquatic and semi-aquatic diapsid reptiles which emerged in the Middle Jurassic Period more than 160 million years ago.

The team reviewed the fossil record of reproduction in this group using exceptionally preserved skeletons of the aquatic choristoderan Philydrosauras. The specimen was donated to the Jinzhou Paleontological Museum in Jinzhou City four years ago by a local farmer who discovered the skeleton.

The skeletons are of an apparent family group with an adult, surrounded by six juveniles of the same species. Given that the smaller individuals are of similar sizes, the group interpreted this as indicating an adult with its offspring, apparently from the same clutch.

Dr Charles Deeming, from the School of Life Sciences, University of Lincoln, UK, said: “That Philydrosauras shows parental care of the young after hatching suggests protection by the adult, presumably against predators. Their relatively small size would have meant that choristoderes were probably exposed to high predation pressure and strategies, such as live birth, and post-natal parental care may have improved survival of the offspring. This specimen represents the oldest record of post-natal parental care in diapsids to our knowledge and is the latest in an increasingly detailed collection of choristoderes exhibiting different levels of reproduction and parental care.”

A test of whether post-natal parental care is an ancestral behaviour that has persisted in the evolutionary development of amniotes will depend on future fossil discoveries.

The study is published in Geosciences Journal.


Contacts and sources:
Marie Daniels
University of Lincoln
on January 19, 2015