Meteors that have crashed to Earth have long been regarded as relics of the early solar system. These craggy chunks of metal and rock are studded with chondrules — tiny, glassy, spherical grains that were once molten droplets. Scientists have thought that chondrules represent early kernels of terrestrial planets: As the solar system started to coalesce, these molten droplets collided with bits of gas and dust to form larger planetary precursors.

An artist’s rendering of a protoplanetary impact. Early in the impact, molten jetted material is ejected at a high velocity and breaks up to form chondrules, the millimeter-scale, formerly molten droplets found in most meteorites. These droplets cool and solidify over hours to days. 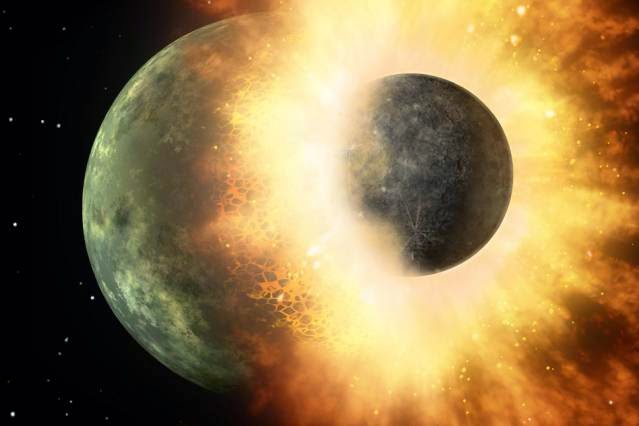 However, researchers at MIT and Purdue University have now found that chondrules may have played less of a fundamental role. Based on computer simulations, the group concludes that chondrules were not building blocks, but rather byproducts of a violent and messy planetary process.

The team found that bodies as large as the moon likely existed well before chondrules came on the scene. In fact, the researchers found that chondrules were most likely created by the collision of such moon-sized planetary embryos: These bodies smashed together with such violent force that they melted a fraction of their material, and shot a molten plume out into the solar nebula. Residual droplets would eventually cool to form chondrules, which in turn attached to larger bodies — some of which would eventually impact Earth, to be preserved as meteorites.

Brandon Johnson, a postdoc in MIT’s Department of Earth, Atmospheric and Planetary Sciences, says the findings revise one of the earliest chapters of the solar system.

“This tells us that meteorites aren’t actually representative of the material that formed planets — they’re these smaller fractions of material that are the byproduct of planet formation,” Johnson says. “But it also tells us the early solar system was more violent than we expected: You had these massive sprays of molten material getting ejected out from these really big impacts. It’s an extreme process.”

Johnson and his colleagues, including Maria Zuber, the E.A. Griswold Professor of Geophysics and MIT’s vice president for research, have published their results this week in the journal Nature.

To get a better sense of the role of chondrules in a fledgling solar system, the researchers first simulated collisions between protoplanets — rocky bodies between the size of an asteroid and the moon. The team modeled all the different types of impacts that might occur in an early solar system, including their location, timing, size, and velocity. They found that bodies the size of the moon formed relatively quickly, within the first 10,000 years, before chondrules were thought to have appeared.

Johnson then used another model to determine the type of collision that could melt and eject molten material. From these simulations, he determined that a collision at a velocity of 2.5 kilometers per second would be forceful enough to produce a plume of melt that is ejected out into space — a phenomenon known as impact jetting.

“Once the two bodies collide, a very small amount of material is shocked up to high temperature, to the point where it can melt,” Johnson says. “Then this really hot material shoots out from the collision point.”

The team then estimated the number of impact-jetting collisions that likely occurred in a solar system’s first 5 million years — the period of time during which it’s believed that chondrules first appeared. From these results, Johnson and his team found that such collisions would have produced enough chondrules in the asteroid belt region to explain the number that have been detected in meteorites today.

To go a step further, the researchers ran a third simulation to calculate chondrules’ cooling rate. Previous experiments in the lab have shown that chondrules cool down at a rate of 10 to 1,000 kelvins per hour — a rate that would produce the texture of chondrules seen in meteorites. Johnson and his colleagues used a radiative transfer model to simulate the impact conditions required to produce such a cooling rate. They found that bodies colliding at 2.5 kilometers per second would indeed produce molten droplets that, ejected into space, would cool at 10 to 1,000 kelvins per hour.

“Then I had this ‘Eureka!’ moment where I realized that jetting during these really big impacts could possibly explain the formation of chondrules,” Johnson says. “It all fell into place.”

Going forward, Johnson plans to look into the effects of other types of impacts. The group has so far modeled vertical impacts — bodies colliding straight-on. Johnson predicts that oblique impacts, or collisions occurring at an angle, may be even more efficient at producing molten plumes of chondrules. He also hopes to explore what happens to chondrules once they are launched into the solar nebula.

“Chondrules were long viewed as planetary building blocks,” Zuber notes. “It’s ironic that they now appear to be the remnants of early protoplanetary collisions.”

Fred Ciesla, an associate professor of planetary science at the University of Chicago, says the findings may reclassify chondrites, a class of meteorites that are thought to be examples of the original material from which planets formed.

“This would be a major shift in how people think about our solar system,” says Ciesla, who did not contribute to the research. “If this finding is correct, then it would suggest that chondrites are not good analogs for the building blocks of the Earth and other planets. Meteorites as a whole are still important clues about what processes occurred during the formation of the solar system, but which ones are the best analogs for what the planets were made out of would change.”

This research was funded in part by NASA.