The year 2014 ranks as Earth’s warmest since 1880, according to two separate analyses by NASA and National Oceanic and Atmospheric Administration (NOAA) scientists. 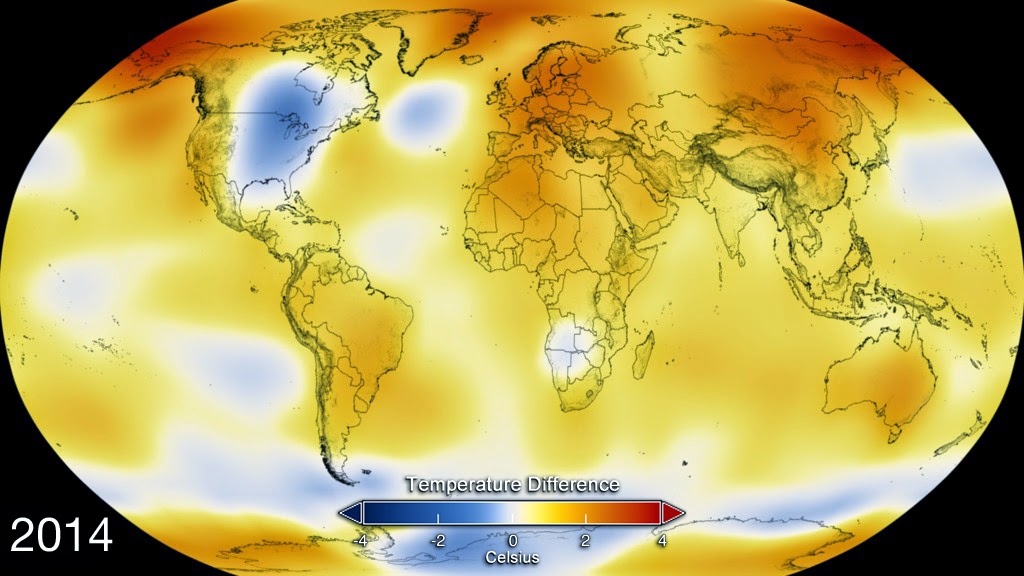 The 10 warmest years in the instrumental record, with the exception of 1998, have now occurred since 2000. This trend continues a long-term warming of the planet, according to an analysis of surface temperature measurements by scientists at NASA’s Goddard Institute of Space Studies (GISS) in New York.

In an independent analysis of the raw data, also released Friday, NOAA scientists also found 2014 to be the warmest on record.

The year 2014 now ranks as the warmest on record since 1880, according to an analysis by NASA scientists.

“NASA is at the forefront of the scientific investigation of the dynamics of the Earth’s climate on a global scale,” said John Grunsfeld, associate administrator for the Science Mission Directorate at NASA Headquarters in Washington. “The observed long-term warming trend and the ranking of 2014 as the warmest year on record reinforces the importance for NASA to study Earth as a complete system, and particularly to understand the role and impacts of human activity.”

This video shows a time series of five-year global temperature averages, mapped from 1880 to 2014, as estimated by scientists at NASA’s Goddard Institute for Space Studies (GISS) in New York.


Since 1880, Earth’s average surface temperature has warmed by about 1.4 degrees Fahrenheit (0.8 degrees Celsius), a trend that is largely driven by the increase in carbon dioxide and other human emissions into the planet’s atmosphere. The majority of that warming has occurred in the past three decades.

“This is the latest in a series of warm years, in a series of warm decades. While the ranking of individual years can be affected by chaotic weather patterns, the long-term trends are attributable to drivers of climate change that right now are dominated by human emissions of greenhouse gases,” said GISS Director Gavin Schmidt.

While 2014 temperatures continue the planet’s long-term warming trend, scientists still expect to see year-to-year fluctuations in average global temperature caused by phenomena such as El Niño or La Niña. These phenomena warm or cool the tropical Pacific and are thought to have played a role in the flattening of the long-term warming trend over the past 15 years. However, 2014’s record warmth occurred during an El Niño-neutral year.

“NOAA provides decision makers with timely and trusted science-based information about our changing world,” said Richard Spinrad, NOAA chief scientist. “As we monitor changes in our climate, demand for the environmental intelligence NOAA provides is only growing. It's critical that we continue to work with our partners, like NASA, to observe these changes and to provide the information communities need to build resiliency.”

Regional differences in temperature are more strongly affected by weather dynamics than the global mean. For example, in the U.S. in 2014, parts of the Midwest and East Coast were unusually cool, while Alaska and three western states – California, Arizona and Nevada – experienced their warmest year on record, according to NOAA.

NOAA scientists used much of the same raw temperature data, but a different baseline period. They also employ their own methods to estimate global temperatures.

GISS is a NASA laboratory managed by the Earth Sciences Division of the agency’s Goddard Space Flight Center, in Greenbelt, Maryland. The laboratory is affiliated with Columbia University’s Earth Institute and School of Engineering and Applied Science in New York.

NASA monitors Earth's vital signs from land, air and space with a fleet of satellites, as well as airborne and ground-based observation campaigns. NASA develops new ways to observe and study Earth's interconnected natural systems with long-term data records and computer analysis tools to better see how our planet is changing. The agency shares this unique knowledge with the global community and works with institutions in the United States and around the world that contribute to understanding and protecting our home planet.

The data set of 2014 surface temperature measurements is available at:

The methodology used to make the temperature calculation is available at: