Most Endangered Chimpanzees Have Complex Evolutionary Past, Perilous Future

In central Cameroon, two different subspecies of chimpanzees live on opposite banks of the Sanaga River, the only instance of two different chimp subspecies living in the wild in a single country. The area is roughly at the geographic center of the range for all four known subspecies of these great apes.

But when a team of scientists recently took a close look at the genetics of central Cameroon's wild chimpanzees, they didn't find two distinct populations; there were three.

Pictured is Ngambe, a Nigeria-Cameroon chimp rescued from illegal animal trafficking who now lives at the Limbe Wildlife Center in Cameroon. 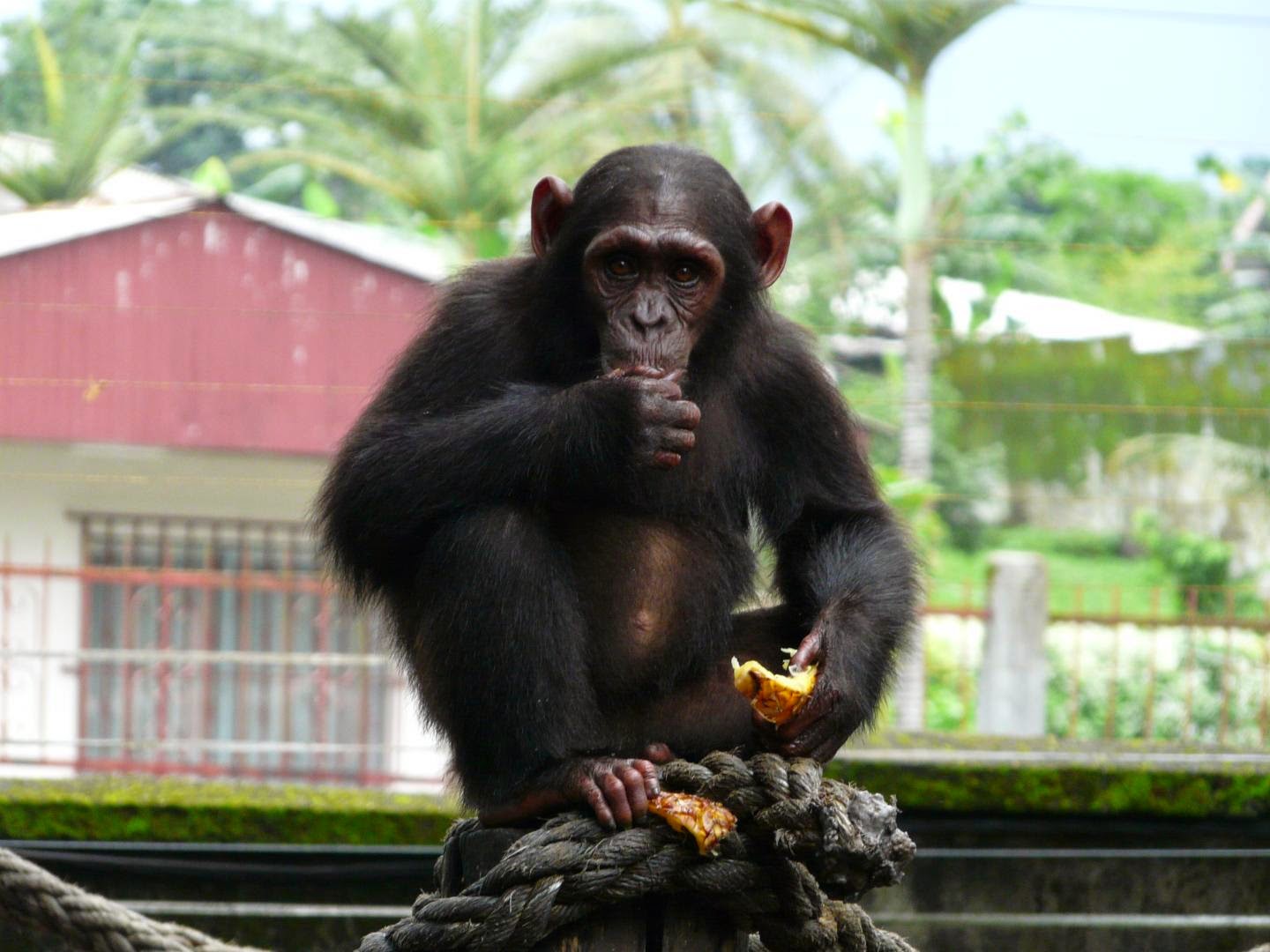 "It blew away our assumptions," said Matthew Mitchell, PhD, a postdoctoral fellow, at Drexel University. "We had always thought that the only genetic difference across populations would be between the two subspecies, and that the differences came from the division across the Sanaga River, but now we see there is more to the picture." Mitchell was first author of two of three new papers about this chimpanzee research with his advisor Mary Katherine Gonder, PhD, an associate professor in Drexel's College of Arts and Sciences, other lab members and an international team of collaborators, published this week in BMC Evolutionary Biology.

The team's complementary analyses of population genetics, geographical distribution and habitat use paint a new picture of the evolutionary past and potentially bleak future of the Nigeria-Cameroon Chimpanzee (Pan troglodytes ellioti), already the most endangered chimp subspecies, with about 6,000 individuals estimated in the wild. They are already threatened by illegal hunting and habitat loss to both logging and agricultural plantations.

Now, among other findings, the scientists report that the two distinct populations of the Nigeria-Cameroon chimpanzee have closer ties to their habitats than previously anticipated. And their findings also suggest climate change could cause significant harm to chimpanzee populations due to habitat alterations.

The research team, one of the few groups studying Nigeria-Cameroon chimpanzees in the wild, collected fecal and hair samples for genetic analyses. They also mapped the precise locations of those sample collection sites in addition to locations of reports of chimp sightings and evidence of activity including nests and tools.

"The Nigeria-Cameroon chimpanzee is perhaps the least studied of all chimpanzee subspecies," said Paul Sesink Clee, a doctoral candidate in Gonder's lab, who was first author of a paper detailing habitat distribution and modeling impacts of climate change. "This is the first time that their distribution and habitat has been studied in such detail, and the data used to predict how their habitats might degrade under climate change."

Central Cameroon is noteworthy not just as a place where two chimp subspecies meet. It's also the place where the species-rich, mountainous Gulf of Guinea region abuts the distinct, but comparably diverse, lowland Congo River Basin. Together, these two ecosystems contain about 20 percent of all plant and animal species on the entire planet, and many of those species are endemic--found only here in central Africa.

These different rainforest ecosystems converge with savanna in central Cameroon forming a savanna-woodland mosaic known as an ecotone.

"This ecotone is associated with driving diversification in a lot of different species," Mitchell said. Ecotones are thought to be important in driving variation and diversification of species all over the world.

This particularly fragile savanna-woodland mosaic habitat in central Cameroon north of the Sanaga River is where Mitchell's genetic analysis identified a population of Nigeria-Cameroon Chimpanzees that was distinct from those living in the mountainous rainforests of northwest Cameroon and eastern Nigeria. They also determined that the population in the ecotone diverged from the western rainforest population about 4,000 years ago --while still remaining closely related members of the same subspecies. (In contrast, this subspecies as a whole diverged from the Central Chimpanzee subspecies (Pan troglodytes troglodytes), whose populations live in Congo River Basin forests south of the Sanaga River, about 200,000 years ago or more.)

In subsequent modeling in a second paper, Mitchell and colleagues concluded that in the Nigeria-Cameroon chimpanzee, a significant amount of genetic difference could come from adaptation to different environments.

In short, these chimps have changed in distinct, genetically noticeable ways, to their lives in different habitats.

Yet the habitats these chimps rely on may be particularly threatened, the team's analysis has showed.

"We were surprised to see that the Nigeria-Cameroon chimpanzees living in the savanna-woodland habitat of central Cameroon are under the most immediate threat of climate change, and may completely lose their habitat within our lifetime," said Sesink Clee.

He and colleagues reached this conclusion based on combining detailed chimpanzee location data with the environmental characteristics of these locations. They then predicted how these habitats would change under climate change scenarios for years 2020, 2050, and 2080. The scenarios were provided by the UN's Intergovernmental Panel on Climate Change and considered a varying range of factors including use of fossil and non-fossil fuels, human population growth, and environmental protection efforts.

While the team predicted little change in the mountainous rainforest habitat, the ecotone habitat of the second population was predicted to decline quickly under all scenarios by the year 2020 and could disappear almost entirely under the worst case scenario by 2080. With roughly half of the 6,000 Nigeria-Cameroon chimpanzees existing in the ecotone habitat of central Cameroon, the results suggest that this subspecies of chimpanzee is particularly vulnerable to climate change.

The authors note that their models may be something of a worst-case scenario for climate change because they do not take into account the potential for these chimpanzee populations to adapt to the changes brought about by climate change, or to migrate to new areas with optimal conditions. On the other hand, chimpanzees continue to face other threats of habitat loss to human land uses, as well as illegal hunting.

"We know very little about Nigeria-Cameroon chimpanzees in the wild," said Gonder. "But everything we have learned about them suggests that Cameroon is a particularly vital location for preserving the diversity found within the species. The governments of Cameroon and Nigeria have made important strides in the last five years to save their chimpanzee remaining populations. The papers published this week in BMC Evolutionary Biology will boost these efforts by providing a solid foundation for policy makers in these countries to make stronger arguments for additional protection in places, such as central Cameroon, which have often been overlooked in ape conservation planning activities."

For an overview of this research written by Gonder, Mitchell and Sesink Clee, visit:http://blogs.biomedcentral.com/bmcseriesblog/2015/01/21/what-can-chimpanzee-tracking-tell-you-about-climate-change/

For more information on the Nigeria-Cameroon chimpanzee or to read the IUCN conservation action plan, please visit: ellioti.org

For more information on the Gonder Lab at Drexel University, please visit: http://www.pages.drexel.edu/~mkg62/