Inside The Big Wormhole In Theory, The Milky Way Could Be A 'Galactic Transport System'

"If we combine the map of the dark matter in the Milky Way with the most recent Big Bang model to explain the universe and we hypothesise the existence of space-time tunnels, what we get is that our galaxy could really contain one of these tunnels, and that the tunnel could even be the size of the galaxy itself. But there's more", explains Paolo Salucci, astrophysicist of the International School for Advanced Studies (SISSA) of Trieste and a dark matter expert.

The (hypothetical) wormhole proposed by Kuefettig, Salucci et al connecting the center with a very far position of our Galaxy when one passes through its throat. 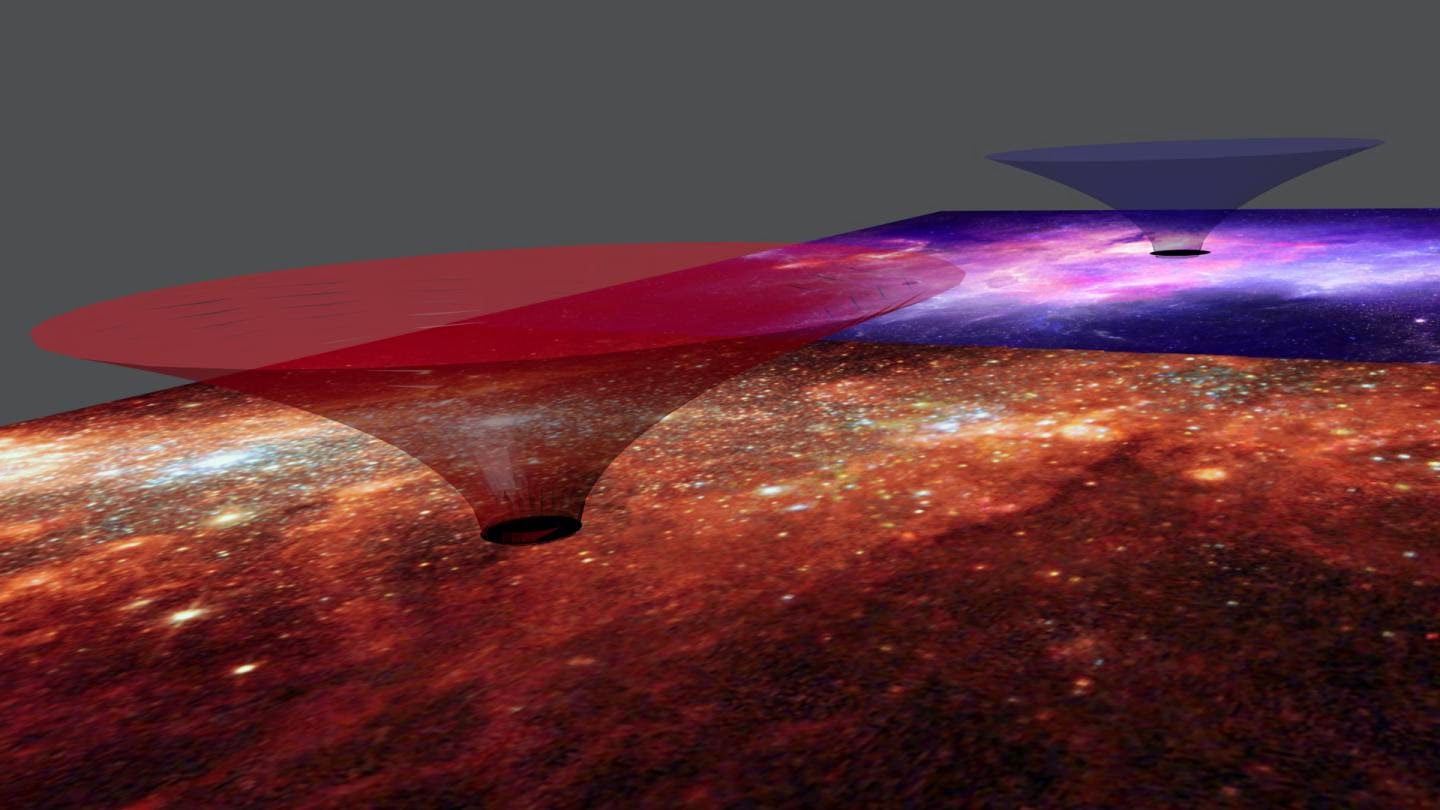 "We could even travel through this tunnel, since, based on our calculations, it could be navigable. Just like the one we've all seen in the recent film 'Interstellar'". Salucci is among the authors of the paper recently published in Annals of Physics.

Although space-time tunnels (or wormholes or Einstein-Penrose bridges) have only recently gained great popularity among the public thanks to Christopher Nolan's sci-fi film, they have been the focus of astrophysicists' attention for many years. "What we tried to do in our study was to solve the very equation that the astrophysicist 'Murph' was working on. Clearly we did it long before the film came out" jokes Salucci. "It is, in fact, an extremely interesting problem for dark matter studies".

The (hypothetical) wormhole proposed by Kuefettig, Salucci et al connecting the center with a very far position of our Galaxy when one passes through its throat.
Credit:  SISSA (Salucci)

"Obviously we're not claiming that our galaxy is definitely a wormhole, but simply that, according to theoretical models, this hypothesis is a possibility". Can it ever be tested experimentally? "In principle, we could test it by comparing two galaxies - our galaxy and another, very close one like, for example, the Magellanic Cloud, but we are still very far from any actual possibility of making such a comparison".

To reach their conclusions the astrophysicists combined the equations of general relativity with an extremely detailed map of the distribution of dark matter in the Milky Way: "the map was one we obtained in a study we carried out in 2013", explains Salucci. "Beyond the sci-fi hypothesis, our research is interesting because it proposes a more complex reflection on dark matter".

As Salucci points out, scientists have long tried to explain dark matter by hypothesising the existence of a particular particle, the neutralino, which, however, has never been identified at CERN or observed in the universe. But alternative theories also exist that don't rely on the particle, "and perhaps it's time for scientists to take this issue 'seriously'", concludes Salucci. "Dark matter may be 'another dimension', perhaps even a major galactic transport system. In any case, we really need to start asking ourselves what it is".

In addition to Salucci, the other scientists who took part in the study included Farook Rahaman (first author), from Jadavpur University in India, and a group of Indian and North American researchers.