Humanity Has Exceeded 4 Of 9 'Planetary Boundaries,' According To Researchers

An international team of researchers says climate change, the loss of biosphere integrity, land-system change, and altered biogeochemical cycles like phosphorus and nitrogen runoff have all passed beyond levels that put humanity in a "safe operating space."

Following approximately 15 inches of rainfall during a two-week span, algae collects on the surface water near the south shoreline of Lake Mendota at the University of Wisconsin-Madison in June 2008. 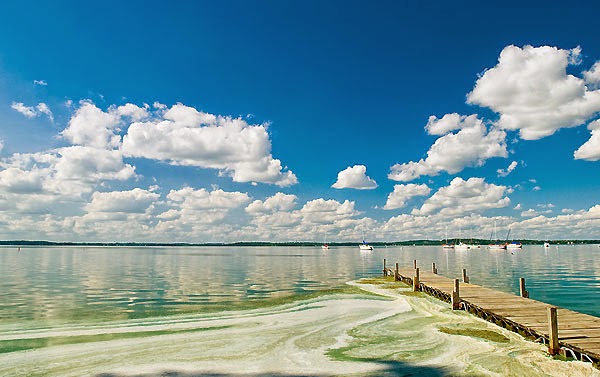 Civilization has crossed four of nine so-called planetary boundaries as the result of human activity, according to a report published today in Science by the 18-member research team. Among them is Steve Carpenter, director of the University of Wisconsin-Madison Center for Limnology and the only U.S.-based researcher on the study.

The report, an update to previous studies, is titled "Planetary Boundaries: Guiding human development on a changing planet," and will be discussed next week at the World Economic Forum in Davos, Switzerland.

It should be a wake-up call to policymakers that "we're running up to and beyond the biophysical boundaries that enable human civilization as we know it to exist," says Carpenter.

For the last 11,700 years until roughly 100 years ago, Earth had been in a "remarkably stable state," says Carpenter. During this time, known as the Holocene epoch, "everything important to civilization" has occurred. From the development of agriculture, to the rise and fall of the Roman Empire, to the Industrial Revolution, the Holocene has been a good time for human endeavors.

But over the last century, some of the parameters that made the Holocene so hospitable have changed.

Steve Carpenter, director of the University of Wisconsin-Madison Center for Limnology, explains ”planetary boundaries” and discusses the role human activity has played in pushing things like phosphorus and nitrogen runoff beyond safe levels.

While the study focuses on several of these, including climate change and a troubling loss of biodiversity, Carpenter led the examination of biogeochemical cycle changes. Specifically, Carpenter looked at two elements essential to life as we know it, phosphorus and nitrogen.

Both are widely used to fertilize crops, and the rise of large-scale, industrial agriculture has led to an immense increase in the amount of the chemicals entering our ecosystems.

"We've changed nitrogen and phosphorus cycles vastly more than any other element," Carpenter says. "(The increase) is on the order of 200 to 300 percent. In contrast, carbon has only been increased 10 to 20 percent and look at all the uproar that has caused in the climate."

The increase in phosphorus and nitrogen has been especially detrimental to water quality. Phosphorus loading is the leading cause of both harmful algal blooms and the oxygen-starved "dead zone" in Lake Erie. Likewise, nitrogen flowing down the Mississippi River is the main culprit behind the "dead zone" in the Gulf of Mexico.

While nitrogen and phosphorus levels overall are well beyond the Holocene boundaries, Carpenter says the chemical load isn't spread evenly over the planet.

"There are places that are really, really overloaded with nutrient pollution," he says. "Wisconsin and the entire Great Lakes region are some of those. But there are other places where billions of people live that are undersupplied with nitrogen and phosphorus."

For instance, much of Africa is largely lacking these two essential elements, Carpenter says. "We've got certain parts of the world that are overpolluted with nitrogen and phosphorus, and others where people don't even have enough to grow the food they need."

It's a "distribution problem," Carpenter says, and suggests places like the Midwestern U.S. could vastly reduce its use of fertilizers and still maintain productive crops while nutrient-poor regions of the globe increase their use -- all while keeping the global levels safely within the study's prescribed "planetary boundary."

"It might be possible for human civilization to live outside Holocene conditions, but it's never been tried before," Carpenter says. "We know civilization can