Wits scientists are part of a multinational team of astronomers working on the High Energy Stereoscopic System (H.E.S.S.) telescopes that have again demonstrated its excellent capabilities in searching for high-energy gamma rays.

In the latest discovery, H.E.S.S. found three extremely luminous gamma-ray sources in the Large Magellanic Cloud (LMC), a satellite dwarf galaxy of the Milky Way. These are objects of different types, namely the most powerful pulsar wind nebula; the most powerful supernova remnant; and a shell of 270 light years in diameter blown by multiple stars, and supernovae – a so-called superbubble.

The Large Magellanic Cloud (LMC) is ablaze with star-forming regions. From the Tarantula Nebula, the brightest stellar nursery in our cosmic neighborhood, to LHA 120-N 11, part of which is featured in this Hubble image, the small and irregular galaxy is scattered with glowing nebulae, the most noticeable sign that new stars are being born. 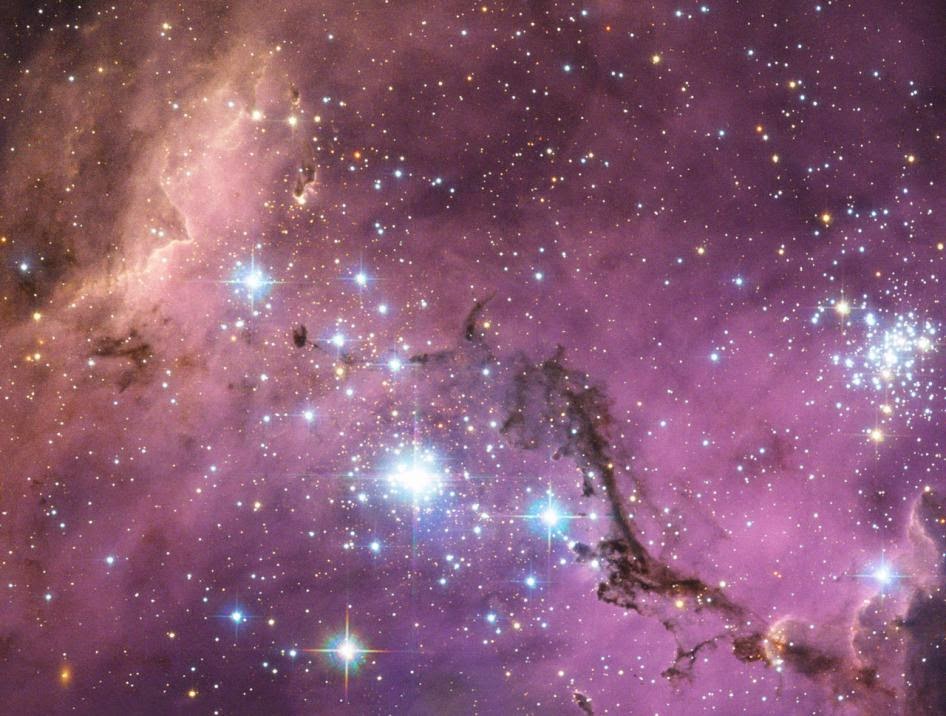 The discovery is announced in the latest edition of the scientific journal, Science, in a research paper titled: The exceptionally powerful TeV ƴ-ray emitters in the Large Magellanic Cloud, which will be published on Friday, 23 January 2015.

“This is a very important breakthrough for the team,” says Professor Sergio Colafrancesco, DST/NRF SKA Research Chair in the Wits School of Physics. “It paves the way to study external galaxies with very high-E telescopes such as H.E.S.S and then later with the planned Cherenkov Telescope Array (CTA) in Namibia. It will lead us to re-examine galaxy evolution and answer questions such as how high-E particles can affect the evolution of cosmic structures in the universe, principally galaxies, and the life cycles of matter in galaxies,” he adds.

Very high-energy gamma rays are the best tracers of cosmic accelerators such as supernova remnants and pulsar wind nebulae – end-products of massive stars. There, charged particles are accelerated to extreme velocities. When these particles encounter light or gas in and around the cosmic accelerators, they emit gamma rays. Very high-energy gamma rays can be measured on Earth by observing the Cherenkov light emitted from the particle showers produced by incident gamma
rays high up in the atmosphere using large telescopes with fast cameras.

The Large Magellanic Cloud (LMC) is a dwarf satellite galaxy of our Milky Way, located about 170.000 light years away and showing us its face. New, massive stars are formed at a high rate in the LMC, and it harbors numerous massive stellar clusters. The LMC’s supernova rate relative to its stellar mass is five times that of our Galaxy. The youngest supernova remnant in the local group of galaxies, SN 1987A, is also a member of the LMC. Therefore, the H.E.S.S. scientists dedicated significant observation to searching for very high-energy gamma rays from this cosmic object. 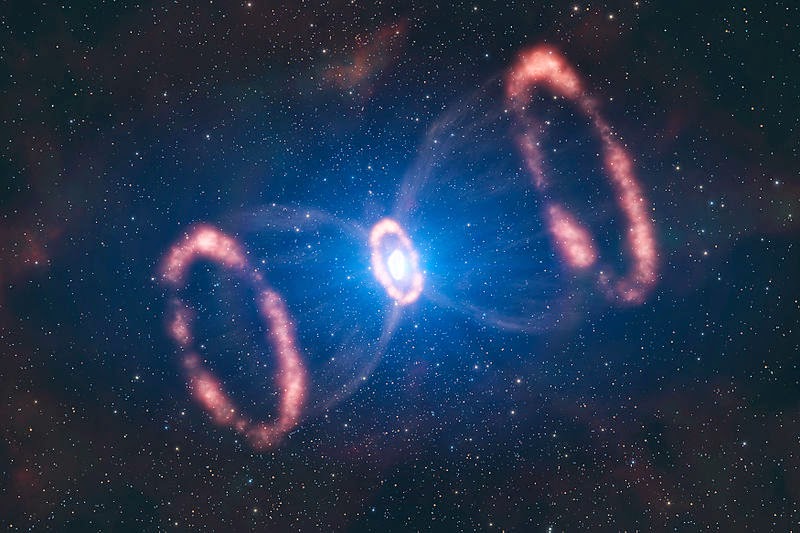 For a total of 210 hours, H.E.S.S. has observed the largest star-forming region within the LMC called Tarantula Nebula. For the first time in a galaxy outside the Milky Way, individual sources of very high-energy gamma rays could be resolved: three extremely energetic objects of different type.

The so-called superbubble 30 Dor C is the largest known X-ray-emitting shell and appears to have been created by several supernovae and strong stellar winds. Superbubbles are broadly discussed as (complementary or alternative to individual supernova remnants) factories where the galactic cosmic rays are produced. The H.E.S.S. results demonstrate that the bubble is a source of, and filled by, highly energetic particles. The superbubble represents a new class of sources in the very high-energy regime. 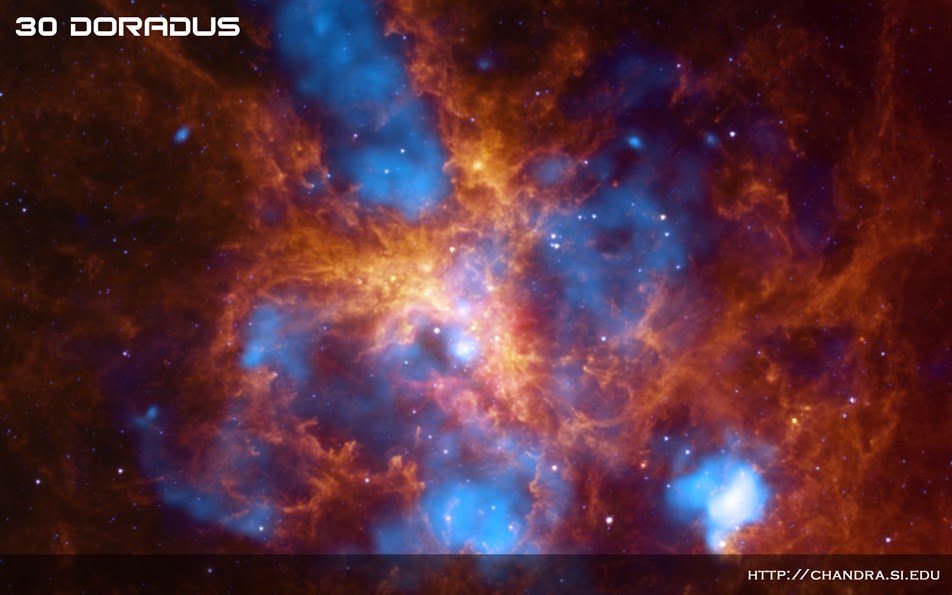 Pulsars are highly magnetized, fast rotating neutron stars that emit a wind of ultra-relativistic particles forming a nebula. The most famous one is the Crab Nebula, one of the brightest sources in the high-energy gamma-ray sky. The pulsar PSR J0537−6910 driving the wind nebula N 157B discovered by the H.E.S.S. telescopes in the LMC is in many respects a twin of the very powerful Crab pulsar in our own Galaxy. However, its pulsar wind nebula N 157B outshines the Crab Nebula by an order of magnitude, in very high-energy gamma rays. Reasons are the lower magnetic field in N 157B and the intense starlight from neighboring star-forming regions, which both promote the generation of high-energy gamma rays. 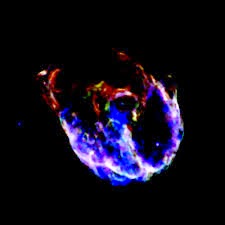 Observed at the limits of detectability, and partially overlapping with each other, these new sources challenged the H.E.S.S. scientists. The discoveries were only possible due to the development of advanced methods of interpreting the Cherenkov images captured by the telescopes, improving in particular the precision with which gamma-ray directions can be determined.

Indeed, the new H.E.S.S. II 28 m telescope will boost the performance of the H.E.S.S. telescope system, and in the more distant future the planned Cherenkov Telescope Array (CTA) will provide even deeper and higher-resolution gamma-ray images of the LMC – in the plans for science with CTA, the satellite galaxy is already identified as a “Key Science Project” deserving special attention.
The H.E.S.S. telescope is operated by an international collaboration of scientists with a strong involvement by South African universities, in particular Wits University, North West University, and the Universities of the Free State and Johannesburg.

Wits physicists are particularly involved in data analysis techniques, the development of theoretical interpretation tools of both extragalactic and galactic sources, and in the operational shifts at the telescope location in Namibia.


Contacts and sources:
University of the Witwatersrand (Wits)
on January 26, 2015