Gas Variations Are Suggestive Of Seasons On Comet Chury

Comet 67P/Churyumov-Gerasimenko continues to reveal more of its secrets: Researchers in Bern have detected considerable variations in the gas escaping from the comet. This could amount to seasonal changes on the tiny celestial body. Meanwhile, the camera OSIRIS on board the Rosetta comet probe is revealing new details of the surface of "Chury".

Colour composite of a part of 67P. The rocky surface contains distinct bright spots. On the floor beneath the rock face, material brighter and bluer than the surroundings can also be seen. Those small blocks might consist of (bluer) water ice. 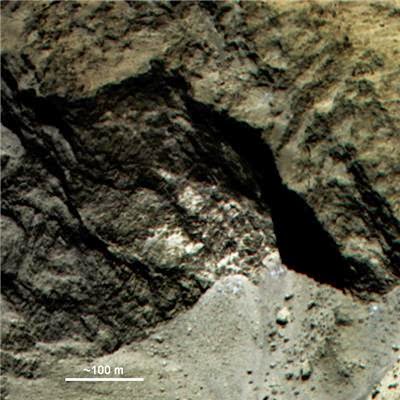 The current issue of Science magazine features a section dedicated to the latest results from the European Rosetta mission to comet 67P/Churyumov-Gerasimenko. The lead authors of three of the eight articles on the topic are researchers in Bern and co-authors of two others are also from Bern. "That shows how big a role the University of Bern is playing in this mission and in comet research," says Kathrin Altwegg of the Center for Space and Habitability in Bern and principal investigator in the ESA mission.

In one of the studies, Myrtha Hässig, a former doctoral student of Altwegg now working as a postdoc at the Southwest Research Institute (SwRI) in San Antonio, USA, is currently analysing the variations in the comet’s coma, or its atmosphere as it were. "Had we simply detected a steady increase in the rate of gas escaping from the comet, there would be no issues as to its heterogeneity,» she said. "Instead, we saw peaks in the water density and, a couple of hours later, in the carbon dioxide measurements." This variation, Hässig believes, could point towards a day–night or seasonal "summer–winter" effect. Or perhaps the comet nucleus itself is inhomogeneous. If so, that would mean its material likely originated from different regions of the early solar system and became mixed together.

"Looked at from afar through a telescope, comet comas look largely uniform, and they do not change over short periods», says co-author Stephen Fuselier of SwRI. "We were really surprised when we saw these variations from 200 kilometres’ distance. Even more surprising was that the composition of the coma changes so drastically." There is accordingly a clear distinction between the composition of the "summer" and the "winter" atmosphere: The former is dominated by water, the latter by carbon dioxide. Since the comet nucleus is very small, at a diameter of 4 kilometres, the summer zone is only about one kilometre away from the winter zone.

Kathrin Altwegg adds: "It is unusual to see such large differences in the atmosphere over such small distances. We now have to observe how the coma evolves as it nears the sun, to determine whether the changes in the coma are a result of temperature differences alone or whether the nucleus itself is inhomogeneous."

Clear, sharp images of the surface captured by OSIRIS

Nicolas Thomas of the Physics Institute of the University of Bern is leading another paper dealing with the pictures of the comet nucleus taken by Rosetta’s primary camera system OSIRIS. The Bern astronomer describes the structure of the comet as highly diverse. "Parts of the surface appear hard and exhibit fracture surfaces, while others appear to be crumbling. Other parts are covered with dust, which is being redistributed by escaping gas. It is an amazing place."

For interpreting the data, the Bern remote sensing team has access to resources recently provided by the National Center for Competence in Research (NCCR PlanetS). "The Swiss support of planetary sciences is huge", says Thomas, «and has given the University of Bern a front-row seat in planetary research."

Studying the interactions between the solar wind and coma

Last but not least, Martin Rubin of the Physics Institute is also working as co-author on a study led by Hans Nilsson of the Swedish Institute of Space Physics on the magnetosphere of "Chury". For this study, the University of Bern has contributed data from the gas pressure sensor ROSINA COPS. This has allowed them to investigate for the first time the interactions between the solar wind and the comet’s coma at such great distance from the sun. The gasses escaping from the comet become electrically charged in the sunlight and are then blown away by the solar wind.

Due to its great distance from the sun, Rubin explains, this effect is much less pronounced on Chury than on previous comets we have sent probes to. "For a plasma researcher like me, it is extremely interesting to observe these interactions during their onset. Many problems in comet research need the cooperation of different teams and combined measurements from different instruments to be solved."