Galactic 'Hailstorm' In The Early Universe

Two teams of astronomers led by researchers at the University of Cambridge have looked back nearly 13 billion years, when the Universe was less than 10 percent its present age, to determine how quasars - extremely luminous objects powered by supermassive black holes with the mass of a billion suns - regulate the formation of stars and the build-up of the most massive galaxies.

These images are a comparison of outflows from telescope observation and computer simulation. 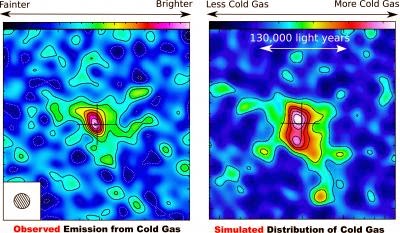 Using a combination of data gathered from powerful radio telescopes and supercomputer simulations, the teams found that a quasar spits out cold gas at speeds up to 2000 kilometres per second, and across distances of nearly 200,000 light years - much farther than has been observed before.

How this cold gas - the raw material for star formation in galaxies - can be accelerated to such high speeds had remained a mystery. Detailed comparison of new observations and supercomputer simulations has only now allowed researchers to understand how this can happen: the gas is first heated to temperatures of tens of millions of degrees by the energy released by the supermassive black hole powering the quasar. This enormous build-up of pressure accelerates the hot gas and pushes it to the outskirts of the galaxy.

This is an illustration of the outflow (red) and gas flowing in to the quasar in the centre (blue). The cold clumps shown in the inset image are expelled out of the galaxy. 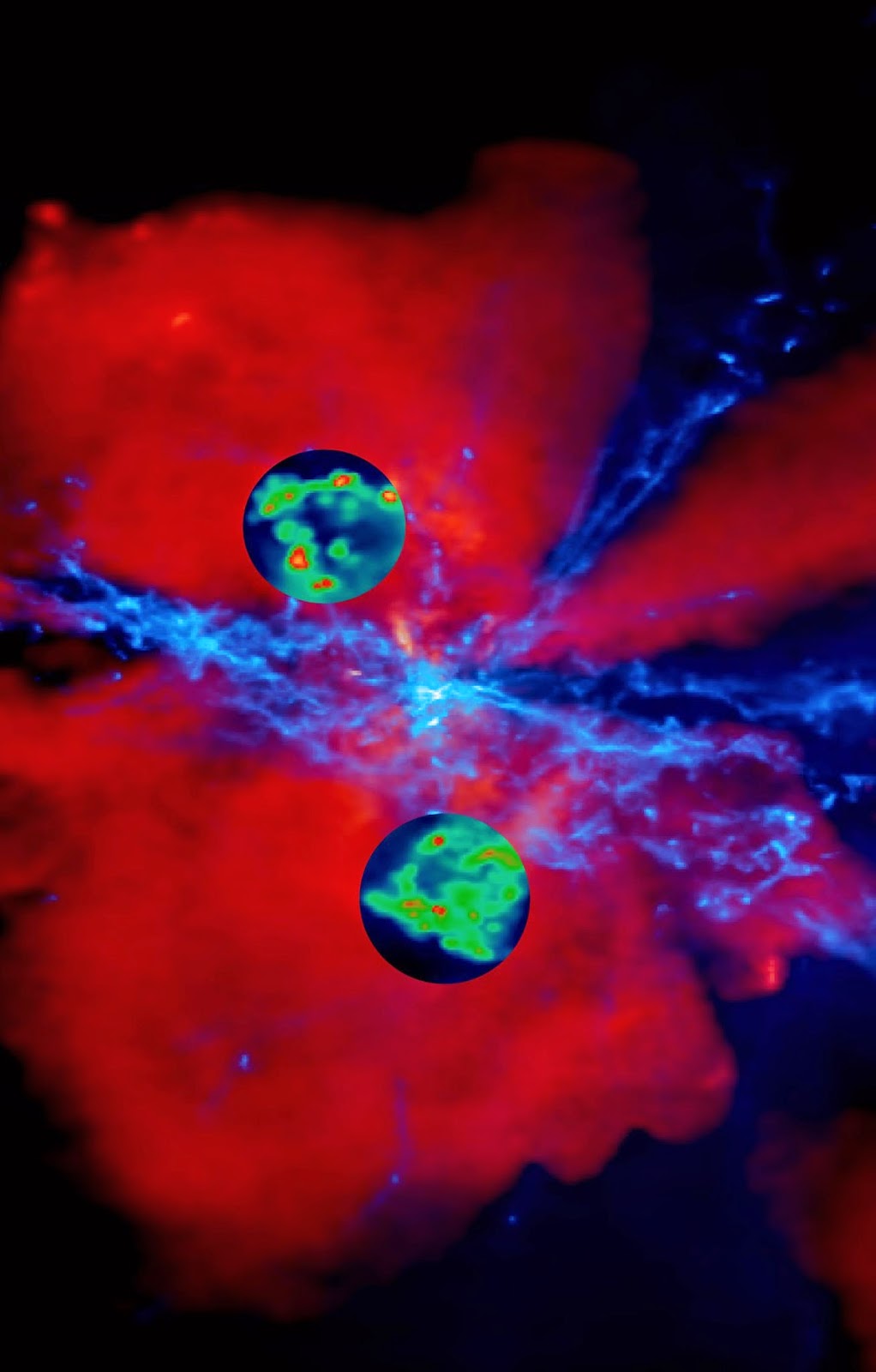 The supercomputer simulations show that on its way out of the parent galaxy, there is just enough time for some of the hot gas to cool to temperatures low enough to be observable with radio telescopes. The results are presented in two separate papers published today (16 January) in the journals Monthly Notices of the Royal Astronomical Society and Astronomy & Astrophysics.

Quasars are amongst the most luminous objects in the Universe, and the most distant quasars are so far away that they allow us to peer back billions of years in time. They are powered by supermassive black holes at the centre of galaxies, surrounded by a rapidly spinning disk-like region of gas. As the black hole pulls in matter from its surroundings, huge amounts of energy are released.

"It is the first time that we have seen outflowing cold gas moving at these large speeds at such large distances from the supermassive black hole," said Claudia Cicone, a PhD student at Cambridge's Cavendish Laboratory and Kavli Institute for Cosmology, and lead author on the first of the two papers. "It is very difficult to have matter with temperatures this low move as fast as we observed."

Cicone's observations allowed the second team of researchers specialising in supercomputer simulations to develop a detailed theoretical model of the outflowing gas around a bright quasar.

This is an illustration of the outflow (red) and gas flowing in to the quasar in the centre (blue). The cold clumps shown in the inset image are expelled out of the galaxy. 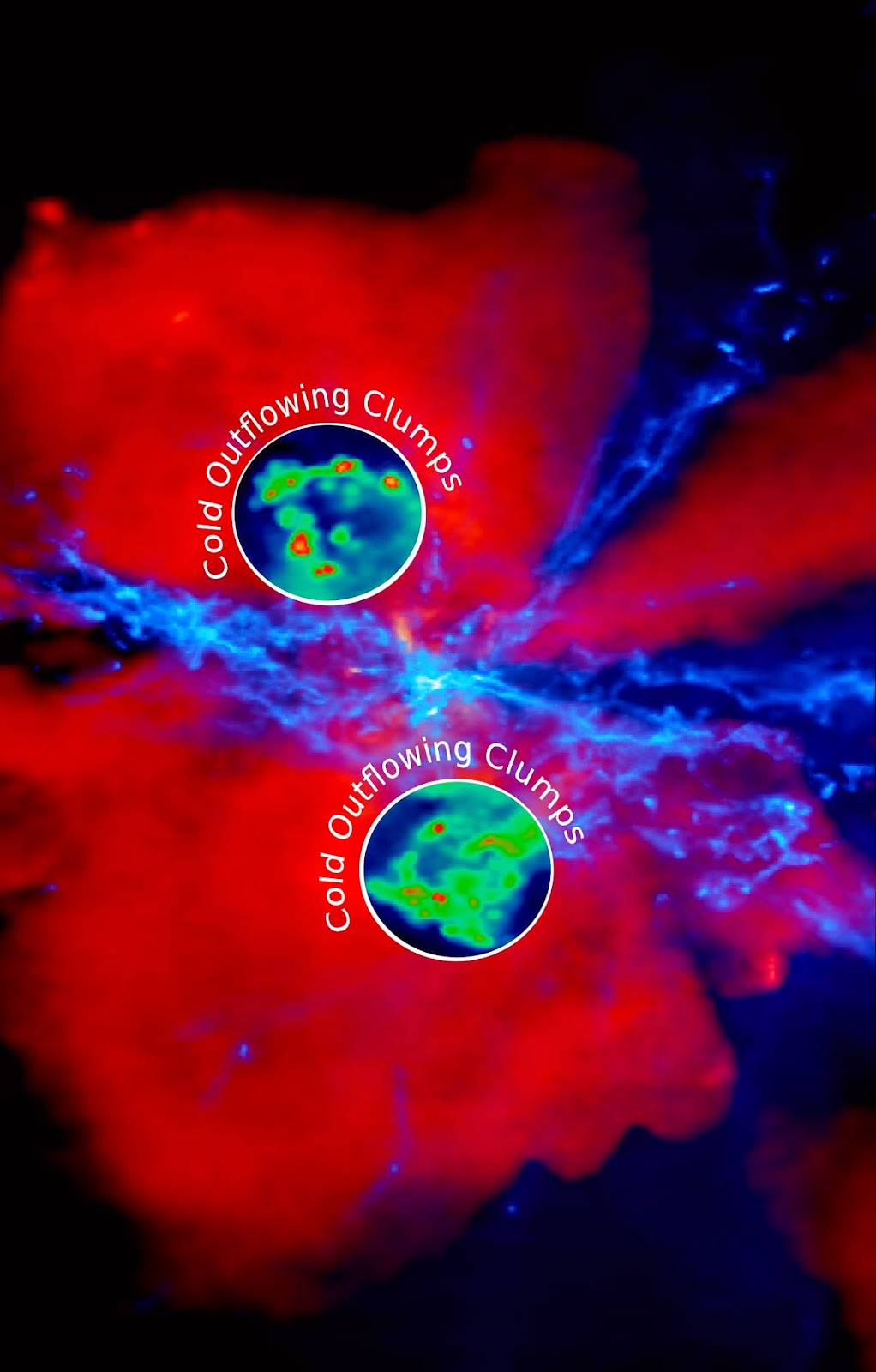 "We found that while gas is launched out of the quasar at very high temperatures, there is enough time for some of it to cool through radiative cooling - similar to how the Earth cools down on a cloudless night," said Tiago Costa, a PhD student at the Institute of Astronomy and the Kavli Institute for Cosmology, and lead author on the second paper. "The amazing thing is that in this distant galaxy in the young Universe the conditions are just right for enough of the fast moving hot gas to cool to the low temperatures that Claudia and her team have found."

Working at the IRAM Plateau De Bure interferometer in the French Alps, the researchers gathered data in the millimetre band, which allows observation of the emission from the cold gas which is the primary fuel for star formation and main ingredient of galaxies, but is almost invisible at other wavelengths.