Could A New Proposed Particle Help To Detect Dark Matter?

Researchers at the University of Southampton have proposed a new fundamental particle which could explain why no one has managed to detect 'Dark Matter', the elusive missing 85 per cent of the Universe's mass.

Dark Matter is thought to exist because of its gravitational effects on stars and galaxies, gravitational lensing (the bending of light rays) around these, and through its imprint on the Cosmic Microwave Background (the afterglow of the Big Bang).

Despite compelling indirect evidence and considerable experimental effort, no one has managed to detect Dark Matter directly. Particle physics gives us clues to what Dark Matter might be, and the standard view is that Dark Matter particles have a very large mass for fundamental particles, comparable to that of heavy atoms. Lighter Dark Matter particles are considered less likely for astrophysical reasons, although exceptions are known, and this research highlights a previously unknown window where they could exist and, with very general arguments from particle physics, derives some surprising results.

The research is published in Scientific Reports.

The proposed particle has a mass of 100eV/c^2, only about 0.02 per cent that of an electron. While it does not interact with light, as required for Dark Matter, it does interact surprisingly strongly with normal matter. Indeed, in stark contrast to other candidates, it may not even penetrate Earth's atmosphere. Earth-bound detection is therefore not likely, so the researchers plan to incorporate searches into a space experiment planned by the Macroscopic quantum resonators (MAQRO) consortium, with whom they are already involved. A nanoparticle, suspended in space and exposed directly to the flow of Dark Matter, will be pushed downstream and sensitive monitoring of this particle's position will reveal information about the nature of this Dark Matter particle, if it exists.

Dark matter is invisible. Based on the effect of gravitational lensing, a ring of dark matter has been detected in this image of a galaxy cluster (CL0024+17) and is represented in blue 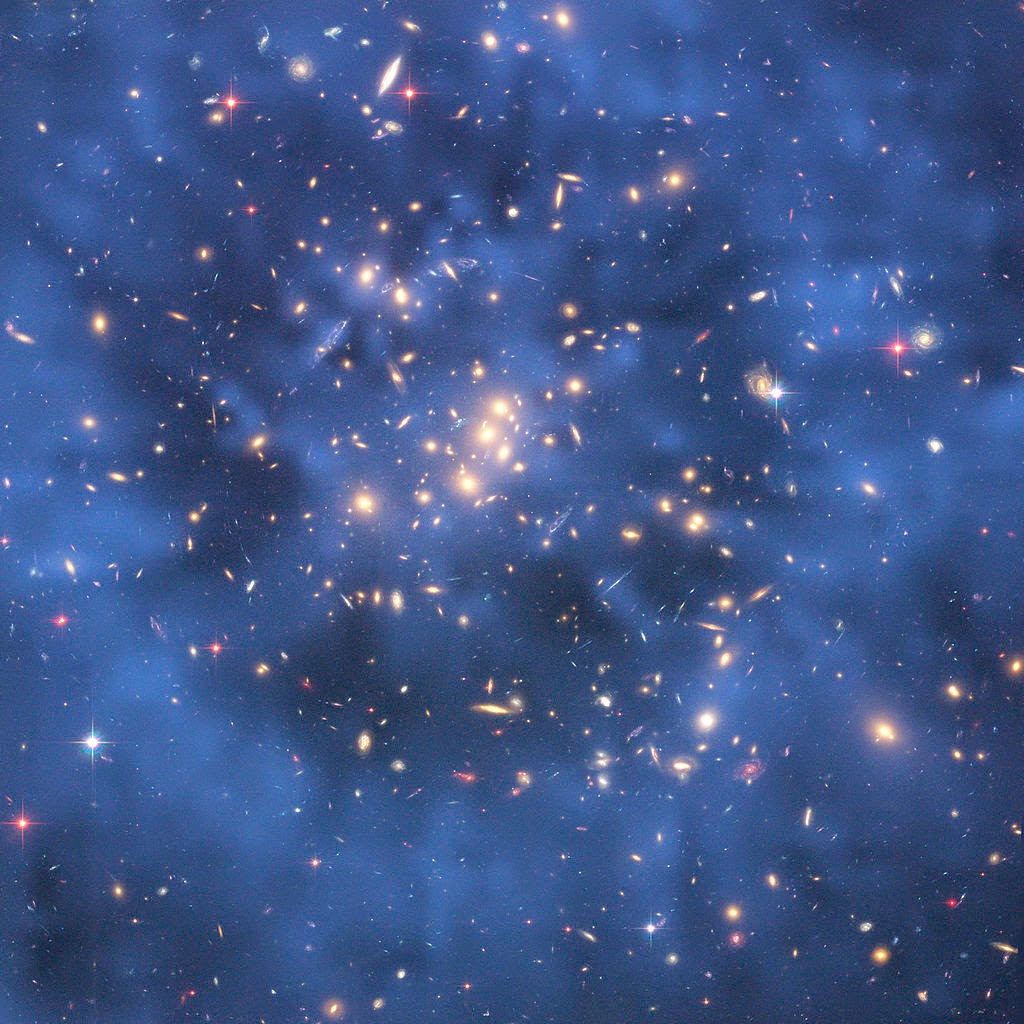 Dr James Bateman, from Physics and Astronomy at the University of Southampton and co-author of the study, says: "This work brings together some very different areas of physics: theoretical particle physics, observational x-ray astronomy, and experimental quantum optics. Our candidate particle sounds crazy, but currently there seem to be no experiments or observations which could rule it out. Dark Matter is one of the most important unsolved problems in modern physics, and we hope that our suggestion will inspire others to develop detailed particle theory and even experimental tests."

Dr Alexander Merle, co-author from the Max Planck Institute in Munich, Germany, adds: "At the moment, experiments on Dark Matter do not point into a clear direction and, given that also the Large Hadron Collider at CERN has not found any signs of new physics yet, it may be time that we shift our paradigm towards alternative candidates for Dark Matter. More and more particle physicists seem to think this way, and our proposal seems to be a serious competitor on the market."

Dark Matter may be a problem to be understood by crossing fields and looking for hidden possibilities.

Dr Bateman adds: "Also from this point of view, the paper comprises a milestone on the history of our department: for the first time there has been a publication involving authors from all three groups in Physics and Astronomy, which shows how valuable it can be to cross boundaries and to look beyond one's own field."

Contacts and sources:
University of Southampton
on January 30, 2015